skip to main content
Return to Fordham University
You are at:Home»University News»Fordham Hosts the Vatican’s Secretary of State in New York City
President Tetlow and Cardinal Parolin at the Pro Pontifice Dinner. Photos by Chris Taggart
Cardinal Pietro Parolin, the second-highest ranking official in the Vatican, served as the guest of honor at a special Fordham dinner, where he met President Tania Tetlow for the second time and offered thoughtful commentary on one of the world’s most popular devices: smartphones.

“Always being available comes at the price of never being free,” Cardinal Parolin said in his dinner speech. “In reality, the digital space, which potentially is the world of unlimited connections and interactions, is a lonely place.”

The Pro Pontifice Dinner, co-sponsored by Fordham and CAPP-USA—the U.S. affiliate of a Vatican foundation—is a longtime tradition that celebrates Catholic social teaching. This year’s dinner was held on Sept. 23 at the New York Athletic Club in Manhattan. In attendance were nearly 100 alumni, administrators, staff, faculty, and friends of Fordham.

President Tetlow: ‘We Are So Proud to Be Part of a Global Church’

From a podium at the front of the President’s Room, Tetlow warmly welcomed Cardinal Parolin, the Vatican’s secretary of state, who was in town to address world leaders at the U.N. General Assembly. 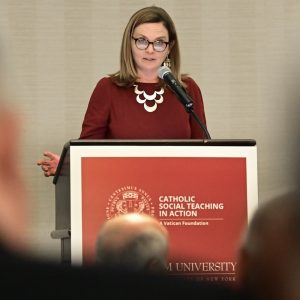 “This week, you chose to use your voice to talk about the power of education, and particularly the Catholic model of education. So you will not be surprised that the people in this room agree with you on that subject,” she said, to chuckles from the audience.

Fordham is a place that not only teaches the fundamental principles of the Catholic faith, but also puts its teachings into action, said Tetlow. In an increasingly secular world, it has become more difficult to draw students back to the Catholic faith, she said. But Fordham continues to rebuild trust with the church and its mission—and does not lose sight of what it means to be one of the premier Catholic universities in the world.

“We are so proud to be part of a global church, to have the privilege and responsibility of operating on a world stage with responsibilities far beyond our borders,” Tetlow said.

In return, Cardinal Parolin expressed his gratitude to Fordham, particularly to the students in the Graduate Program in International Political Economy and Development who have supported the work of the Holy See through internships under the Permanent Observer of the Holy See to the United Nations, Archbishop Gabriele Caccia.

Cardinal Parolin is a longtime friend of Fordham. In 2014, he participated in his first Pro Pontifice Dinner. In 2019, he visited the Lincoln Center campus, where he learned about Fordham’s Pope Francis Global Poverty Index. Most recently, Cardinal Parolin and President Tetlow met in person for the first time during a summer pilgrimage to Rome, where the cardinal initiated a partnership between Fordham and Villa Nazareth, a Vatican-affiliated residential college in Rome that provides free education to talented students.

A Message from the Vatican: The Dangers of the Digital Space

In his dinner address, the cardinal offered a message about smartphones: devices that have not only revolutionized the ways that we interact with the world, but also created an unhealthy dependency, he said.

“Being constantly online leaves human beings in a perpetual state of agitation, clicking and swiping on a virtual journey to nowhere,” said Cardinal Parolin. “Paradoxically, being too connected leads to social isolation, which in turn can cause a range of spiritual and mental challenges, including depression.” 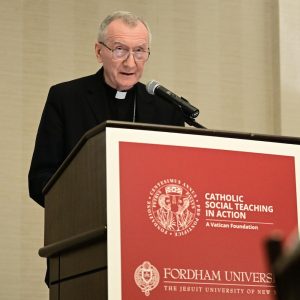 Cardinal Parolin speaks about the dangers of overusing smartphones.

Being separated from your phone can actually be liberating, he said.

“Cardinal Collins, Archbishop of Toronto, was telling me that students who enter the propaedeutic year of his archdiocesan seminary are obliged to forgo the use of a smartphone for a period of one year,” Cardinal Parolin recalled. “At the outset, the seminarians are traumatized, wondering how they will survive for so long without this vital tool. At the end of the year, however, they are all most grateful for the experience of liberation, recognizing that it was not they who had been using the smartphones, but rather, vice versa—the smartphones had been using them.”

Pope Francis himself has spoken on this issue multiple times, said the cardinal. The best solution is to balance the costs and benefits of smartphone use, he said. 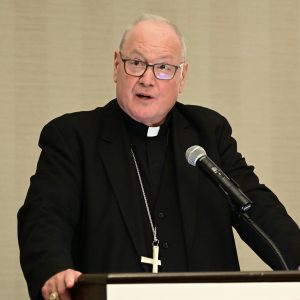 “In brief, we need to ensure that our engagement with digital technology takes place in an informed, wise, and balanced manner, cognizant of both the benefits of connectivity, and the dangers its disordered use poses,” the cardinal concluded.

Throughout the dinner, guests mingled over a three-course meal—boneless short rib, bleu cheese salad, and red jacket apple tart—and listened to a suite of musical performances from several artists, including the New Bel Canto Trio. At the end of the evening, President of CAPP-USA Frederick Fakharzadeh emphasized the significance of the Pro Pontifical Dinner.

“As we bring this evening to a close, I would like to echo what has become a clear theme of this evening: a celebration of past gatherings and a celebration of tonight’s return to such events … in which we salute the strong ties between the Holy See and the Catholic community, locally and globally,” said Fakharzadeh. “The mission of promoting Catholic social teaching takes a community—global, national, and international—and tonight, we come together from all over the world to honor this sacred charge.”