skip to main content
Return to Fordham University
You are at:Home»Colleges and Schools»Fordham College at Rose Hill»Fordham Hosts Latino College Fair
“When you bring a diverse audience like this to campus it invites them to the possibility of actually coming here. It’s a way to say, ‘Hey, we’re welcoming everyone.’”
It took 17-year-old Jariel Noel a couple of hours to get to Fordham’s Rose Hill campus from Brooklyn. But he said the trip was worth it because he was there to attend the Latino College Fair.

“I wish I had done this sooner” said the college senior, “Even though it was far to come, it’s very helpful.” 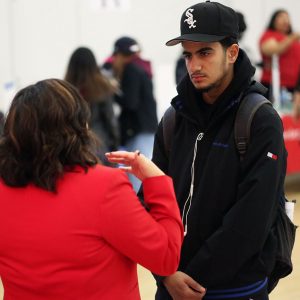 Jariel Noel listens to a counselor from New York Institute of Technology.

The Commission on Independent Colleges and Universities (CICU) sponsored the Nov. 21 event. More than 50 nonprofit private colleges filled McGinley Center to provide information on their universities and sponsor bilingual workshops on how to plan and pay for college.

While many high school students start attending fairs in their junior year, there were plenty of seniors like Noel who were just beginning the process.

Juan Perez, senior, came from the South Bronx, where he attends high school. He said he wants to be a pilot, even though he said his high school guidance counselor discouraged the move. At the fair he got a sympathetic ear from Dowling College Admissions Counselor Victoria Herrmann.

“It reminds me of myself,” she said. “A lot of people around me popped my dreams for what I wanted to do. Then I met a counselor who said you can do this.”

Herrmann explained Dowling’s aviation program to Perez and encouraged him to apply. He said that he wants to apply at the school, but he will still need his counselor’s help in filling out the application.

“I want to realize my dream, but my mom lives in the Dominican Republic and my father is always working, working, so he’d not really involved,” he said, noting that neither of his parents finished college.

“It’s great to see first generation students apply,” Herrmann said later. “We have some students who have the world on a platter, so students who don’t have that need to know that we’ll figure it out one way or another.”

CeCe Belcher, a senior assistant director of admissions at Sarah Lawrence College, was among many counselors who delivered a few hard truths about college costs.

“We give out up to 70 percent in aid, but we rarely give out a full package,” she said. “We have a real conversation with applicants. We don’t want them to come away with an insurmountable debt.”

Nevertheless, many of the private colleges do have substantial endowments and there are plenty of public resources to explore as well, said Laura Anglin, president of CICU.

“A lot of people look at the sticker price and they go, ‘Wow!’” said Anglin. “But . . . in New York private colleges give over $5 billion annually and that’s just institutionally. There are also scholarships, fellowships, state aid, federal aid, work study, subsidized loans, and more.” 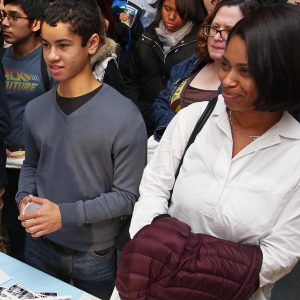 Teddy Guzzetta with his mother Gabriel Hamilton talk with a counselor from Columbia University.

Anglin said the goal was to make sure that students understood that of the 270 colleges in New York State, one could be the perfect fit.

“We want to expose everyone to their choices as well as their options for how to pay,” she said. “With the undocumented students, we try to help them understand what resources are available, what questions to ask, and how to ask them,” she said.

Many students came with their families or school groups such as Long Island University’s Tech Entry Program. The group brought more than 30 high school students from Brooklyn.

“An activity like this opens their eyes, because they’re able to speak to representatives from so many different colleges,” said LIU’s Assistant Dean Oswaldo Cabrara. 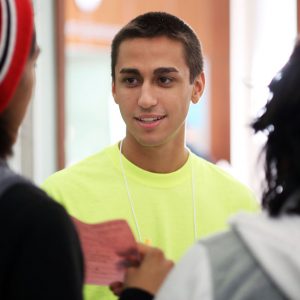 Andrew Freire said the event was an important way to address inequities.

Rose Hill junior Andrew Freire, a volunteer, said that the event was an important way to address inequities.

“There are a lot of crazy things that have been going on recently and this is a good way for Fordham to show that not everyone is trying to marginalize people,” she said. “When you bring a diverse audience like this to campus it invites them to the possibility of actually coming here. It’s a way to say, ‘Hey, we’re welcoming everyone. So apply.’”