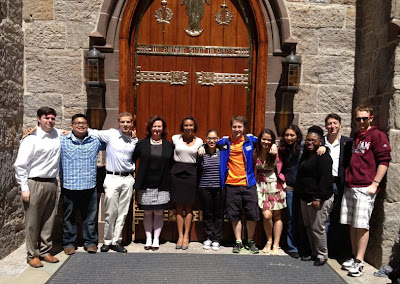 This week around the world, millions of Catholics are gearing up for one of the largest and most anticipated events for young people globally—and among them are 16 members of the Fordham community.

A delegation of 14 students and two campus ministers leave tomorrow for World Youth Day 2013, held this year in Rio de Janeiro, Brazil. The group will join more than two million young Catholics from around the world for a week of prayer, music, cultural events, pilgrimages, and a celebration of Mass with the pope.

In addition to being an event held only every two or three years, this World Youth Day is particularly exciting for participants, because it is the first one to be attended by the newly-elected Pope Francis.

“When the students signed up to go on the trip, Pope Benedict was still the pope,” said John Gownley, assistant coordinator of liturgy for campus ministry and a chaperone for the trip. “Once we found out that a Jesuit had been elected, it changed things in a sense, because we feel a deep connection.”

Before joining fellow World Youth Day pilgrims, the Fordham delegation will first head to Salvador da Bahia, Brazil, the site where the Society of Jesus arrived in the 17th century to begin their mission in Latin America.

There, the group will participate in Magis 2013, a pastoral experience that is held in the days leading up to each World Youth Day. Grounded in Ignatian spirituality, Magis brings together members of Jesuit institutions from around the world for a week of cultural immersion and solidarity.

The Fordham delegates and their international companions will convene in Salvador da Bahia and then split into groups for immersion experiences. Activities range from volunteering on themed service projects, such as justice-oriented and environment-oriented excursions, to going on a pilgrimage.

“The students are really excited about the Magis component, because it means we’ll immerse ourselves in the Brazilian community as men and women for and with others,” Gownley said. 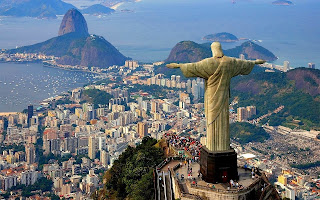 The group—which comprises seven students from each of the Rose Hill and Lincoln Center campuses, as well as Gownley and Carol Gibney, associate director for campus ministry at Lincoln Center and director of Ignatian Programs—has been meeting throughout the academic year to prepare for the trip. In addition to fundraising, they have met monthly for spiritual reflection, cultural instruction, Portuguese language lessons, and even packing tutorials.

“I told them that before they leave, they should pack their bag and then walk down to their local mall and back. If they can do that with no problem, then they have packed well,” Gownley said.

For Deborah Adewale, a rising junior at Lincoln Center, knowing what to pack is hardly a concern. The Staten Island native went with her home parish to attend the 2011 World Youth Day in Madrid. The effort it takes to prepare for the trip is well worth the experience that awaits the pilgrims, she said.

“It’s so uplifting to see youth like myself praising and worshipping together,” Adewale said. “The beautiful thing is that it shows how religion can unite people from different countries and walks of life.”

And despite being a World Youth Day veteran, Adewale has felt the anticipation as the date of departure drew closer.

“I would like to grow more in my faith through this experience,” she said. “But I do not know what to expect, so I hope for all the best.”

Gownley said that he hopes each student will receive from the experience just what he or she needs.

“At World Youth Day, you get to experience Catholicism on a global platform and see the real presence of God’s work in a way that is alive and active and not isolated to me here in my community,” Gownley said. “It validates something for them, especially because our students are growing up in a world where faith is secondary and is constantly challenged for them.”