More than 1,000 alumni and friends of Fordham attended the black-tie affair at the New York Hilton Midtown—a new venue for the dinner and a hotel that has hosted every U.S. president since John F. Kennedy.

This year’s gala also celebrated and supported Faith & Hope | The Campaign for Financial Aid. Over the past two years, the campaign has reached more than 90 percent of its $175 million goal.

But at its heart, the dinner was more than a meal among those who love the University. It was a toast to the people—every person connected to Fordham’s 178 years of life.

In addressing the crowd, Joseph M. McShane, S.J., president of Fordham, recounted the day he met a few friendly locals in a Florida fishing shop. They complimented the Fordham baseball cap atop his head—but they mistook his gear for a Florida State hat. They had no idea what Fordham was. But the innate issue was their question: “What is Fordham?”

“Now, I know that sounds like a bad new Dr. Seuss book,” Father McShane said, to the audience’s laughter. “But I truly believe it’s the truth.”

“Fordham is a world-class faculty, a hardworking staff, talented and devoted administrators, students, trustees, donors, alumni—all of whom are men and women for others.”

Beneath the dimmed lights of the Grand Ballroom, Amie Ko, GABELLI ’19, spoke on behalf of the Founder’s Scholars.

“On this night, standing before you, I can’t help but think that in 54 days I will no longer be an undergraduate student at Fordham,” said Ko, an aspiring tax accountant who will intern at PricewaterhouseCoopers this summer. “From the start of the semester, I have been asked countless times: ‘How does that make you feel?’ And to be very honest, I am scared. I am nervous. I am sad,” she said.

“But most of all, I am incredibly thankful.”

Ko, a Division I athlete for Fordham’s swimming and diving team who recently led her team to its first undefeated season in almost a decade, spoke about her gratitude for her teammates, her four years of Fordham memories, and the donors who made her current reality possible.

She also took a moment to remember one Founder’s scholar who couldn’t make it: Rachel Ragone, GABELLI ’18, who died last January after a long battle with bone cancer. As Ko recounted Ragone’s four years at Fordham—her studies in applied accounting and finance, her semester spent at Fordham’s London Centre, her passion for raising funds and awareness for children’s cancer—a photo collage of Ragone appeared in the background.

“As Rachel’s mom Kim Ragone has shared with us,” said Ko, “‘Fordham gave Rachel the best time of her life.’”

During the festivities, Father McShane presented the Fordham Founder’s Award to each of the three couples honored this year.

The Pattersons, natives of Atlanta, have been married for nearly 60 years. Solon Patterson worked for 48 years in investment management; he retired in 2007 as CEO of the investment firm Montag and Caldwell. Marianna Patterson worked in the banking industry before becoming a full-time mother.

The couple has been instrumental in helping Fordham’s Orthodox Christian Studies Center to prosper over the past decade. In the early 2000s, they created an endowment to establish the Patterson Triennial Conference on Orthodox/Catholic Relations. 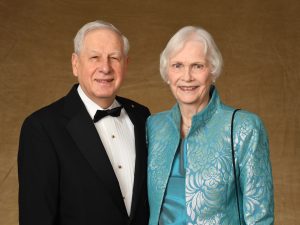 “In the process, they have enabled Fordham to become the only Catholic university in the world that offers degree programs in Eastern Orthodox studies,” said Father McShane.

“Solon is Greek Orthodox, and I am Roman Catholic, and we have long prayed for the end of the separation of these oldest and largest Christian bodies. Their reunion would be a positive event for all Christians the world over,” Marianna Patterson said.

The Pickets are longtime New York philanthropists. Joel Picket, a Manhattan native, is the chairman and CEO of Gotham Organization—the real estate development firm that was key to constructing several buildings on campus, including the Law School/McKeon Hall complex at Lincoln Center and the William D. Walsh Family Library at Rose Hill. He is a two-term member of the Board of Trustees and a current trustee fellow who helped make the master plan for the Lincoln Center campus redevelopment a reality. Joan Picket, who has worked as an advertising copywriter and real estate broker, has served in multiple service organizations. 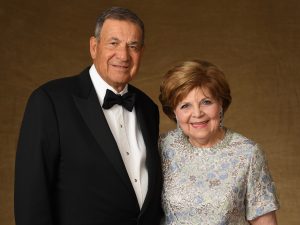 Together, the couple’s generosity spans several initiatives at Fordham, from scholarship support for Jewish studies to the funding of new campus facilities.

“Neither of us have a Fordham education,” Joel Picket said. “[But] from my first introduction to Father O’Hare to what we consider a special relationship with Father McShane, I have seen what strong and dedicated leadership means and grasped the greatness of the Jesuit education.”

The last couple includes a Fordham alumnus—Dennis Ruppel. Today, Ruppel is chairman of Freedom Bank, chairman of AmCap Insurance, and co-owner of the Press Hotel in Portland, Maine. He is a current trustee fellow who has served multiple terms on Fordham’s board of trustees. Dennis and his wife, Patricia Ann, champion multiple organizations, particularly those devoted to early childhood education.

“In her own words, Pat has ‘adopted Fordham,’ and carries the University in her heart,” said Robert D. Daleo, GABELLI ’72, chair of Fordham’s board of trustees and a Founder’s 2019 co-chair.

At Fordham, the couple created the Dennis and Patricia Ruppel Endowed Scholarship. They have also supported athletics, WFUV, career services and experiential education, the sailing program, and other University endeavors. 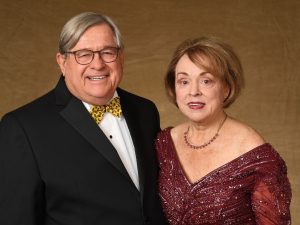 “Fordham had few students from Florida when I arrived in 1964, never having been in New York City. I was the virtual stranger in a strange land,” Dennis Ruppel said.

“Within weeks, I realized how special Fordham is: classmates who were bright, questioning, and welcoming; professors whose love and mastery of their subject was infectious; an atmosphere filled with the Ignatian care for the whole person; and, in the Jesuit tradition, the expectation that we live our lives in the service of others.”

The 2019 awardees join 47 other Founder’s Award recipients, the first of whom were honored in 2002.

Examples of a Life Well Lived

“I praise God for what you have become and who you have become and how you have become, first of all, examples of a life well-lived with a strong moral compass,” Father McShane said, gazing at the hundreds of faces across the ballroom. “Tonight, it is my great honor to look at all of you and say to you, ‘You, my friends, are our treasure.’”