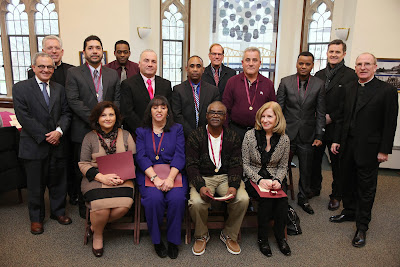 Recipients of the 1841 medal pose with members of the administration who presented them with award. Photo by Michael Dames

The year 1993 turned out to be a good year for Fordham’s custodial services office. That year, Santiago Baustista, Leka Gazivoda, Domenico Lucciola, and Isidro Marrero joined the department.
It was also the year that Jerry Jackson, aka “Father Jay,” decided that, having worked for the department for 20 years, he would stick around a little longer.
On Dec. 11, the Fordham community honored them and four other employees for their combined 220 years of service to the University.
The annual 1841 Award Medal for Service ceremony recognizes members of the support staff who have worked for the University for 20 years or longer. It was held at Butler Commons on the Rose Hill Campus.
Also honored with 20-year medals were Francesca Falciano, senior secretary for the Graduate School of Religion and Religious Education, Roderick Henry, from Safety & Security, and Lucia Venusio, a representative in Enrollment Services. Josephine Fallon, switchboard operator at Fordham IT, who, like Jackson, has worked at Fordham for 40 years, was unable to attend. 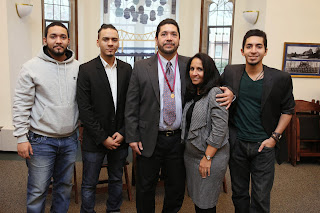 In a short and festive program that drew friends and family of the honorees, Joseph M. McShane, S.J., president of Fordham, described the gathering as “Fordham’s Thanksgiving,” and an opportunity to give thanks for the people who work behind the scenes to keep the University clean, safe, and organized.
He noted that many of them emigrated from countries that include Italy, Montenegro, and the Dominican Republic, and that many of their children also attend Fordham.
“You are the strength of the University. You do extraordinary things every day. You make miracles happen, you make difficulties disappear,” he said.
“This city has strength because it draws strivers and seekers to itself. Immigrants and sons and daughters of immigrants, that’s who we are, and I rejoice in that—as the grandson of an immigrant,” he said.
For Isidro Marrero, a temporary position that he landed in the summer of 1993 led to a fulltime job at Fordham. Over the years, he has worked in Martyrs Court and Loschert, Alumni, and Dealy Halls. Currently he is assigned to the Lombardi Center. 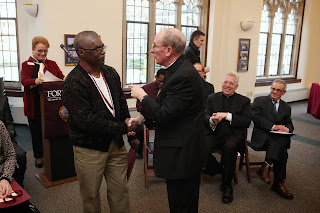 Joining Marrero for the celebration was his wife, Carmen, his granddaughter, Ariana, and his three sons Matthew, Marcus, and Daniel, all of whom attend Fordham.
“The University has treated my family and my co-workers so well. It’s like a family here,” he said.
Jackson, who began working at Fordham in 1973, joked that he could probably find his way around the Rose Hill campus blindfolded. The secret to lasting 40 years, he said, is dedication and respect for the students, staff, and fellow co-workers.
“I love the campus. At the 20-year mark, I said ‘This is my home, this is my house,’” he said. “I wouldn’t trade it for the world.”