On Nov. 8, Daniela Puliafito, assistant director of the Fordham Fund, left New York with her family for an anything-but-ordinary visit to Rome.

An invitation to a private baptism and communion from a close family friend not only led the Puliafito family to the Domus Sanctae Marthae, where Pope Francis resides, but to an encounter with the Pope himself.

Puliafito said her friend Adrian Pallarols had met Pope Francis when the pope was still serving as a cardinal in Argentina. A silversmith by trade, Pallarols had worked for then-Cardinal Bergoglio and has since crafted all of the pope’s chalices. They have remained very close, making the pope a father figure in Pallarols’ eyes. 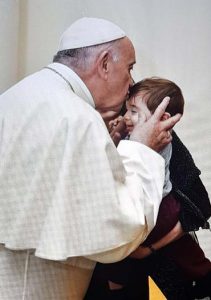 Loual Jr. gets a kiss from Pope Francis

Typically, the Domus Sanctae Marthae has high security measures, not even allowing visitors to bring in a bag. However, in a room of about 14 people, Puliafito said she had a different experience.

“I was allowed to bring my stroller in, and the kids were using the hallway as their own personal play area,” she said. “It was surreal.”

Puliafito was hesitant to allow her son, Loual Jr., to roam free in the beloved room, but decided it would be fine once she saw how “warm and grandfather-like” the pope was.

“As soon as I put my son down, he started crawling up to the altar and looked up at him. My son was very calm, and Pope Francis definitely has a spiritual aura. It was a sweet moment to experience.”

Joseph M. McShane, S.J., president of Fordham, had given Puliafito some books which were received and blessed by the pope. He gave everyone an individual blessing and blessed anything that the visitors had chosen to bring with them—from pins to crosses to everything in between.

The group communicated in Spanish, said Puliafito. “My husband had a beautiful speech prepared, but all I managed to get out was ‘I pray for you’—to which the pope responded ‘Good. I need it.’”

From hearing about the times Pope Francis would enjoy tea and cookies with his friend Adrian when they were both in Argentina to seeing him interact with the children, Puliafito left Rome viewing Pope Francis as a true pastor.