skip to main content
Return to Fordham University
You are at:Home»Inside Fordham»Fordham Celebrates its Own at the 2016 Convocation

Each year at the Fordham University convocation, the University honors its longest-serving employees with the Bene Merenti medal or the Archbishop Hughes medal, for 20 or 40 years of service.

And each year Joseph M. McShane, SJ, president of Fordham, asks the award recipients to stand and face the crowd, and asks their families to stand.

“Of course, the men and women whom we honor would remind us that they could not have served the University and transformed the world without the faith, support and love of their families,” said Father McShane. 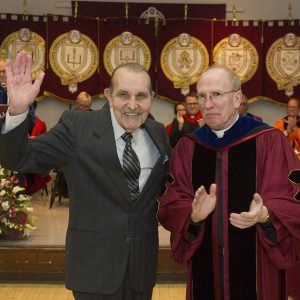 Joseph Cammarosano celebrated 75 years on campus and 60 years of teaching.

This year, from the back of the McGinley Ballroom, Kevin Mulcahy hoisted his daughter up to see her mother, Julie Fissinger, who had just received the Archbishop Hughes medal for 20 years of administrative service as the director of the President’s Council. Fissinger’s two older children tilted their heads to get a glimpse of their mom.

“We do this sort of thing for kids all the time, so it’s kind of nice to see the adults get recognized,” said Mulcahy.

Fissinger said that Fordham has been always been a “good fit” for her because she was able to leave and take care of her kids when they were young, and then come back.

“It’s allowed me to balance my career in a family-friendly place,” she said.

Dozens of relatives celebrated alongside the 49 recipients, in what Father McShane called, “a family celebration.” Many said that Fordham was a place where one could explore life beyond the University gates and still be welcomed back.

Aleksa Mardjonovic’s family also stood and waved their hands as he received the Sursum Corda award, which recognizes members of the staff who made outstanding contributions to the University. Marjonovic, an HVAC mechanic, said he started at Fordham in the early 1970s, but left during the 1980s to “try other things.” and came back in 1990s. Like Fissinger, he returned because “Fordham has been good for me,” he said.

While most recipients celebrated 20 and 40 years of service, one notable exception—at 60 years of service—was Joseph R. Cammarosano PhD, professor emeritus of economics. He came to Fordham as a freshman in 1941. He is the second person in Fordham’s history to have received the Bene Merenti medal, which recognizes faculty 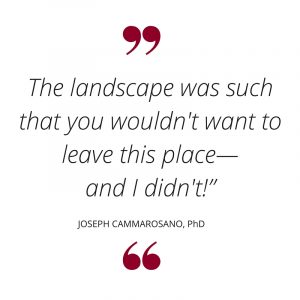 And while this year marked Cammarosano’s 60th year of teaching at Fordham, it was his 75th year on campus.

“It’s been a blur,” said Cammarosano. “But after 75 years, I still feel as though I’m freshman coming up the Elm Road for the first time to see the dean.”

Cammarosano recalled a time on campus when “there were more squirrels than students” and a faculty “that was largely Jesuits.”

“There was more cohesion in those days because we all marched in step,” he said. “You had the same student sitting next to you in freshman year as you had in sophomore year. It was a good place to develop camaraderie.

“Those were great days. The landscape was such that you wouldn’t want to leave this place—and I didn’t!”

“Everybody comes together and works hard on keeping the college a very safe and great place,” she said. “And I’m telling the complete truth—because I’ve seen how hard everybody works.” 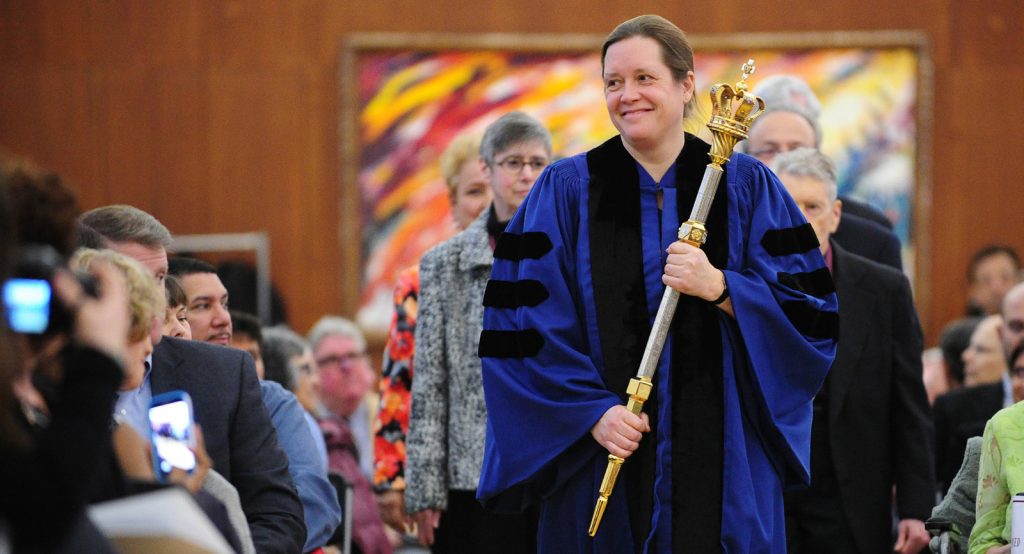