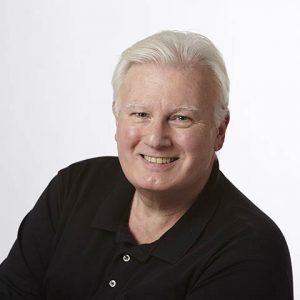 “Fordham, and New York, has lost a distinctive voice today,” said Joseph M. McShane, S.J., president of the University. “Our hearts go out to Rich’s loved ones, his colleagues, and his family of listeners.”

“Rich is gone far too soon, at just 62,” said Chuck Singleton, WFUV’s general manager, in a post on the WFUV site. “Like all his fans, we’ll miss his energy, enthusiasm and good nature. He did everything with high standards and an open heart.”

Conaty began at WFUV as a Fordham student and continued his work with the radio station for over four decades. He took over an existing Sunday night program in early 1973, renamed it “The Big Broadcast,” and was the host for more than 2200 shows. Each was filled with meticulous salutes to composers, singers, and bandleaders, along with listener requests, all drawn from his voluminous record collection and leavened by his encyclopedic knowledge.

“Even though Rich hardly ever played a post-World War II recording, the show never felt like a dated museum piece, because of his passion for the music,” said Rita Houston, program director of WFUV Radio. “That passion was infectious, attracting a devoted audience that ranged from 8 to 80 and included a number of well-known writers and musicians.”

He lived in Hudson, N.Y., and has kept his favorite era of music alive throughout the years. During his career at WFUV, he was able to meet some of his favorite musical acts, including the Boswell Sisters, Bing and the Mills Brothers, Mitchell Parish and Cab Calloway.

“If there’s any consolation,” said Singleton, “it’s the thought that this host of a show ‘for the old, and the old at heart’ might be sharing a ‘Hi De Ho’ with Cab Calloway on some bandstand in the sky.”