They convened at the Princeton Club, a private club nestled in the heart of midtown Manhattan, for an “evening of sharing expertise, networking, and building relationships among council members, seniors, and young alumni,” said Carolyn M. Albstein, GABELLI ’82, PAR, chair of the President’s Council. The theme of this year’s event was the power of storytelling.

Cards at each table carried a message for guests: “Share and discuss a few milestones from your own life—highlights or setbacks—and consider how they have shaped your personal narrative.”

Joseph M. McShane, S.J., president of Fordham, was one of the first attendees to share a piece of his personal life.

“Fordham was where my father, a first-generation college student, was able for himself—and his whole family—to achieve the American dream,” he told a roomful of council members and alumni.

Robert D. Daleo, GSB ’72, chair of the board of trustees, recounted another story, about a day familiar to every Fordham graduate: commencement.

“Every year, we sit up there in Keating, gently shaded while everybody else is in the hot sun,” Daleo said, referring to the Terrace of Presidents, where board members and distinguished guests sit during the ceremony. “We look out on that sea of roughly 2,000 graduates, and Father [McShane] and I lean over next to each other and say, ‘Well, we did it again. Thank goodness!’ And for most people, they think that’s the end. Really, it’s just the beginning.”

Huddled around white-clothed tables with hors d’oeuvres and drinks in hand, students and young alumni heard tales about their predecessors’ careers: their struggles, their successes, and even their ages.

“Five generations of people are here tonight. We’re talking about people from the ’70s, the ’80s, the ’90s, the 2000s and the teens,” council member John J. Reddy Jr., Esq., FCRH ’76, PAR, exclaimed to the men and women seated at his table. “I thought to myself, which of these five decades do you belong in? You belong in that first one—the ’70s. I’m the old man in the room!” 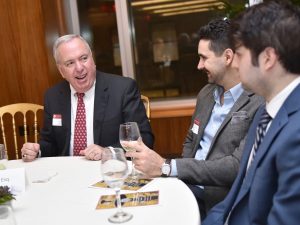 Reddy warned the younger generation not to overplan their lives. Today, Reddy is an attorney. But over the past few decades, he was many other things: a first-year biology major who had planned on becoming a dentist; a cook who fixed fried chicken, shrimp, and hot dogs and watched games for free at a ballpark concessions stand—which was, he mentioned, “the best job I ever had,” and an employee at a securities bureau in an attorney general’s office.

“Suddenly, it becomes all in your past,” he said. “These are the things you were gonna do, and then you find something that you like to do.”

Steven D. Valentic, GABELLI ’04, vice president at Goldman Sachs Group Inc., admitted one of the first mistakes of his professional career. He’d been working at a firm for about five months, when the worst happened—he made a trade-related error.

“That’s what you do when you’re right out of school. You’re learning. It happens to everyone,” he told the students and alumni seated around his table. “You overcome it by not making the same mistake twice.”

A few tables over, another council member addressed a different problem: what to do when your current job grows stagnant. 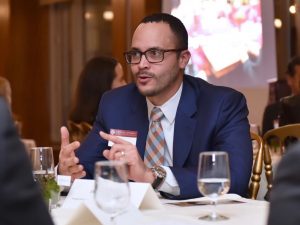 Inoki A. Suarez, FCRH ’98, speaks about what it’s like to create a startup company.

“In 2014, I was frustrated. What do I want to do with myself? Where do I see myself in five years?” said Inoki A. Suarez, FCRH ’98, managing director and team leader at the Carlyle Group. “Doing the same thing I’m doing [now]? The answer is no.”

Suarez abandoned his old job, created a startup company with a few friends, and reinvented himself. Over three and a half years, he flew across the U.S. and met new clients, leveraged LinkedIn and Fordham connections, and eventually helped increase the company’s assets from zilch to $2.6 billion.

His message? Don’t be afraid to go back to square one.

Some of the students in the room aren’t even at “square one” yet, like Neil Joyce, a graduating senior at the Rose Hill campus who is mentally prepping himself for life—and his career—in the ‘real world.’

Life for a graduating senior is, as Joyce puts it, “a bit of an existential crisis.” He’s trying to pinpoint where he’ll be five, ten, 15 years from now, he said—and that’s exactly why mentoring events like these are so important.

“A lot of alumni said that’s a question that never really goes away … this is a journey that will be going on for the rest of our lives,” he said. “[Events like these are about] keeping the conversation going and helping us think critically about where we want to be in the near and distant future.”

It’s all about learning and networking, attendees said. And, as Father McShane says, “building a new world.”

“It’s the end of a long day—the night before the midterm elections. And what are you doing?” Father McShane asked the Fordham women and men standing before him. “You’re building a new world by networking with younger sisters and brothers of yours.”