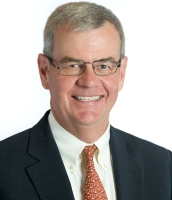 The courtroom is much less mysterious place for eight Fordham pre-law students, thanks to Mark J. Hyland, FCRH’ 77, LAW’ 80.

Hyland, a partner at the law firm Seward &amp; Kissel, LLP and co-head of the firm’s Litigation Group, invited three groups of students to shadow him as he tackled cases in court in April and June.

In each session, Hyland briefed the students on the particulars of the case they’d be attending by sending them briefs to read, and chatting with them in person before entering the court.

Hyland said the idea of inviting students to shadow him was first broached when he visited the Rose Hill campus last year to speak to the Prelaw Society at the Walsh Library.

He chose three cases that he felt were substantial and presented thorny, interesting legal issues. They concerned a securities fraud claim, a suit by lenders who were suing a guarantor of failed real estate development, and an insider trading accusation.

“The life of a litigator means you don’t do rote things every day. Every case is its own problem. You have to master that case and that business, and it can be very exciting to master all of that and apply the law to the facts and commit to a strategy that will lead your client to the best result,” he said.

In the insider trading case, which Hyland argued on June 19th, one of the defendants in the case had already pleaded guilty. His client worked at the same company but pleaded not guilty, making for what he called an “interesting factual matrix.” The appearance before United States District Judge Jed S. Rakoff of the Southern District of New York was spirited and lively, lasting from 4:30 to 7:30 p.m.

“I wanted the students to see the intellectual stimulus first hand, the excitement about it, and the ups and downs. This is a profession where you don’t go through your life on a straight level emotional path,” he said.

“When you win a big case, it gives you that thrill of being 12 years old and hitting a home run. In this area that I do, you can still have that experience, and most people don’t get to do that. Now of course, the lows are tough too, but that’s life.”

Daniel Carter, a rising junior majoring in American Studies and history at Fordham College at Rose Hill, was one of two students to shadow Hyland on the 19th.

It was the first time in a court room for Carter, a pre-law student currently volunteering at the Fordham Law clinic, and although some of the jargon in the briefs made for a challenging read, he was able to follow the proceedings.

“The judged asked him to elaborate on points that weren’t straightforward in the documents, so that was great for us,” he said.

“I thought Mr. Hyland did the best job explaining it and afterward he explained some of the things that happened, what was good for him and what he didn’t like so much.”

He’s hoping to practice constitutional law when he graduates, but found the experience enlightening nonetheless.

“We sat in on the case prior to this, and one of the lawyers wasn’t even there. The judge called him on the phone and said where are you?” he said.

“So I joked with Mark that we got a taste of the pros and the not so pros.”

“Knowing who everyone was on the panel was really exciting for me, because it wasn’t like I was just walking in and hearing what they had to say and then leaving. It was more of an educational experience, because I did already know what was going on, I could pay attention, and I felt engaged in the matter,” he said.

“I thought it was really cool to see different lawyers defending different viewpoints and arguing the case very logically.”