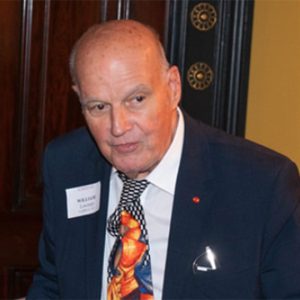 After hosting faculty, staff, and alumni at a reception at the Carlton Club near St. James’s Palace on the evening of Oct. 26, Father McShane headed to the London campus the following day for a casual visit with students. There, he updated students on developments back home, such as the hugely successful President’s Ball, which he noted was safely held in September for more than 3,400 under tents on Edwards Parade.

Father McShane said that things like the ball and the return to overseas study are possible thanks to widespread vaccinations, and noted that Pope Francis has called getting a vaccine a “moral responsibility” that one does for others, not just for oneself.

“It’s an act of charity,” he said, adding that the students’ attendance in London made them pioneers in the return to normalcy. The spring semester looks very promising as well, he said, with more than 300 students registered.

He then told the students at the lunch gathering that just as New York is their campus back home, they should make London and the U.K. their campus while abroad.

“Think outside of the Bronx,” he said. “I want you to do London. It’s one of the great cities. New York and London are cities that understand each other. So, you should feel at home here. Dig in and see the place.”

Students take a break in the Fordham London cafe.

In addition to encouraging the students to see the more than 50 churches designed by architect Christopher Wren, he also suggested visiting Oxford and Cambridge universities. While Oxford is more bustling, he said students may find Cambridge to be more familiar as it features the “Wedding Cake” tower of St. John’s College, on which the cupola of the Rose Hill campus’ University Church is modeled.

“You’ll find yourself there and say, “Oh my God, they copied it. No, we copied it,” he said to laughs.

And when they’re back in London, he said, they can use his tip to see St. Paul’s Cathedral and Westminster Abby without paying the tourist entrance fees.

“If you want to go and not pay, go to the Evensong performance,” he said.

“You just go up and say you’re there for the performance and [the security guards]fall back and let you in. I mean I took a vow of poverty; I have to watch every penny.”