The church was celebrating Baccalaureate Sunday, a day when the congregation recognizes high school and college graduates, as well as students who continue to receive support from the Abyssinian Baptist Church Scholarship Ministry.

‘The Truth Will Set You Free’

Father McShane opened his remarks by quoting John 8:32: “You will come to know the truth, and the truth will set you free.”

“When Pilate, as you remember, questioned Jesus on the first Good Friday, Jesus said to Pilate, ‘For this, I was born, and for this I came into the world, to bear witness to the truth. Everyone who is of the truth hears my voice. That sly fox, that snake Pilate responded by asking Jesus quite coldly: ‘What is truth?’ Pilate, as you know, was not of the truth.  Therefore, he was stumped,” he said to the graduates. “You are not.”

He said that as a result of their education and grace-filled upbringing in the Abyssinian community of faith, they have come to know that “Jesus is the way, the truth, and the life.” He noted that their diplomas should not be viewed as awards, but rather as promissory notes taken out with God, for which they must employ the gifts of their education to change the world for the better.

Members of the congregation bless the young scholars.

In addressing the graduates and their families, Father McShane stressed Dr. Butts’ emphasis on the importance of honoring the students and graduates at church. 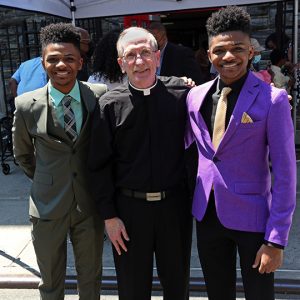 Father McShane with Tyrese and Tyrell Belgrave. The twins are high school seniors and new “Aby Scholars” who have both enrolled at Rutgers University.

Dr. Butts, he said, noted that “it was essential to recognize them here, in their spiritual home because ‘faith and education are the Tigris and Euphrates of our liberation: the twin rivers at the source of our redemption.’ Now my dear friends, that is a phrase to reflect on and that is a phrase to conjure with, especially in this historic congregation,” said Father McShane.

Dr. Butts, who delivered this year’s University commencement address to thunderous applause and a standing ovation, also received an honorary degree at the May 21 ceremony at Rose Hill. He was unable to attend the baccalaureate service at Abyssinian due to illness.

“Dr. Butts never tires of reminding us, rightly, that faith and education together form a modern-day cradle of civilization and the true source of both liberation and redemption. How right he is. … But Dr. Butts of course is not alone in thinking that.”

Father McShane admitted to being nervous about speaking at the storied church, due in no small part to its illustrious history in the Black community. But he also cited the oratorical expertise and scholarly craftsmanship of Dr. Butts’ sermons, as well as that of Dr. Butts’ predecessors.

“The pastors who have led you since 1808 have been what are called Princes of the Pulpit—eminent scholars, powerful preachers who have been simply extraordinary,” he said. 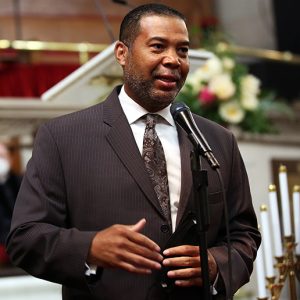 Sean Davenport, GSE ’01, is the new superintendent of Harlem’s District 5.

He stressed not only the scholarly attributes of Dr. Butts, former president of SUNY Old Westbury, but of the congregation itself. At the podium, in the congregation, even among the candidates for state and local office that had come to the service on the Sunday before primary day, there were graduates of Fordham. Students and graduates also hailed from Howard, Lehigh, and Oxford universities, and included “Aby Scholars”—those receiving scholarships from Abyssininan—from Morehouse, Rutgers, and City College.

But Fordham maroon was the color of the day. The Rev. S. Raschaad Hoggard, Ph.D., GSE ’22, gave a shoutout from the podium to his fellow graduate and friend Michael Trerotola, Ph.D., GSE ’22, assistant university secretary and special assistant to Father McShane. When New York City Schools Chancellor David Banks, who was at the service, stood to make the surprise announcement that church member Sean Davenport, Ed.D., would become Harlem District 5’s new superintendent, the crowd erupted in applause. Davenport got his master’s from Fordham in 2001. And Fordham’s own Rev. Mark Chapman, Ph.D., associate chair of the Department of African and African American Studies, introduced Father McShane.

A Gracious Introduction and a Dash of Humor 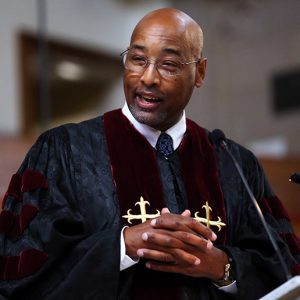 Chapman cited Rudyard Kipling in introducing Father McShane, who, he said exuded the same warmth and charm whether speaking before a large crowd or just one on one.

“He embodies the verse in Rudyard Kipling’s famous poem ‘If’: ‘If you can talk with crowds and keep your virtue, Or walk with Kings—nor lose the common touch,’” said Chapman. He also described Father McShane as the quintessential New Yorker who gained his skill for debate as a Yankee fan at Boston College.

At the podium, Father McShane continued the jesting when discussing his nervousness, particularly after realizing that Butts’ powerful commencement address would be a very tough act to follow.

“I have spent the last few weeks praying; I’ve asked the Lord to give me strength, courage, wisdom, and a modicum of eloquence,” he said. “I even dreamed this morning that I would take the wrong turn on the Henry Hudson and end up in New Jersey.”

The crowd was with Father McShane, both in his humor and as he described their beloved pastor. They stayed with him as they spoke on truth, nodding their agreement, and encouraging him aloud to continue.

‘You Have a Part in God’s Great Work’

Father McShane responded by keeping the focus on the honorees of the day, the young graduates and scholarship recipients, who he asked to stand, be recognized, and receive the blessings of the entire congregation. Hands were raised in worship in the direction of the scholars as he prayed:

“You have a part in God’s great work. You are a link in a chain, a bond of connection between persons. God has not created you for nothing. You shall do good. You shall do His work. You shall be angels of peace, preachers of truth in your own place, even while not intending it, if you but keep His commandments and serve Him in your calling. Be not afraid—never,” he said.

“Go forth into the world in peace and hold fast to the truth. Return no one evil for evil. Rather, strengthen the faint-hearted. Support the weak. Love and serve one another, rejoicing always in the power of the Holy Spirit, and may the blessing of God who is Father, Son, and Holy Spirit come upon you and remain with you forever. And let the people say: Amen!”