skip to main content
Return to Fordham University
You are at:Home»Inside Fordham»Family Matters

Siblings often share time on a Fordham campus. Twins sometimes occupy the same dorm rooms. Brothers and sisters, a few years apart, bump into one another between classes or out and about in the city. Such familial interactions are a normal part of the Fordham story. 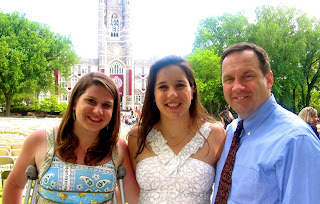 It’s the rare Fordham father, however, who shares a campus workspace with his daughter. But that’s exactly what the McGees did since 2007, when Kate McGee enrolled at Fordham and joined her father Don, a part-time DJ at WFUV (90.7 FM, wfuv.org), on the Rose Hill campus.

“It was kind of a neat thing,” said Don McGee. “They both decided to come here on their own, though I do like to think I had some influence on their decisions.”

Both Kate and Annie said having their father around—if only on occasion—initially helped with the sometimes-difficult transition from high school to college. But they are quick to point out that they eventually found their own footing.

“It was nice in the beginning,” Kate said, “because I didn’t go home a lot. When I saw him, I kind of felt like I had. Later, I didn’t see him as much because I was always running between internships and classes, but usually when he was [at WFUV]I did try to stop by. Usually to pick up something he brought from home.”

Like her father, Kate wanted to pursue a career in radio, which is one of the reasons she chose Fordham. Since its launch in 1947, WFUV has trained countless Fordham students for radio careers in music, sports and news.

Once on campus, she landed a work-study position at WFUV. She later earned an internship and, eventually, a staff position in the station’s news department, working closely with George Bodarky, FCRH ’93, the station’s news and public affairs director and host of Cityscape.

As a student journalist, she amassed an impressive array of clips, including stories for Issues Tank, the station’s new regional investigative program. In 2010, she won a Gracie Allen Award, presented by American Women in Radio and Television, and a Society for Professional Journalists’ Region 1 Mark of Excellence Award in 2011.

“WFUV became a kind of second home for me,” said Kate, who completed internships at NBC and WNYC during her senior year before landing a job as content producer for The Star-Ledger. “I was there all the time, even when I wasn’t working.”

Though the McGees shared a workspace for four years, Don said he always tried to let Kate stand on her own, even if that meant sacrificing a few on-air opportunities.

“We only got on the air together twice,” said Don, who joined Fordham’s noncommercial radio station in 2001, when Mixed Bag host Pete Fornatale, FCRH ’67, a former colleague at WNEW (102.7 FM) and WAXQ (104.3 FM), needed someone to sit in for him on the air. “But it was thrilling.”

While her father and sister shared an interest in radio, Annie McGee came to Fordham with a different set of goals and interests.

“I joke around and say Kate and I have the same resume,” she said, “but I’m not interested in journalism. I want to study political science and find my own way.”

Did the family’s presence on campus ever grow too close for comfort for either sister?

“Not at all,” Annie said. “She and I [have]had totally different experiences. We met different types of people. We took different classes. It’s always nice to see family. It’s nice to touch base with home from time to time.”

(Above, left to right: Annie, Kate and Don McGee at the 166th Commencement. Image courtesy of Don McGee)