“Faith & Hope has created opportunities for students of diverse socioeconomic backgrounds to come to Fordham, earn a world-class education, and seek employment,” said Susan Conley Salice, FCRH ’82, one of three campaign co-chairs and a first-generation college graduate herself. “These scholarships open doors to students who may not otherwise be able to attend, and give them the opportunity to transform their lives.”

“Scholarships are at the heart of Fordham’s mission, and are central to the Jesuit notion of service to the human family,” said Joseph M. McShane, S.J., president of Fordham. “Scholarships transform individual lives, of course, but in democratizing education and knowledge, they also help create a more just world and a more equitable society. I am deeply heartened that so many of our generous alumni and friends agree, and I am forever grateful for their openhearted and openhanded support.”

Breaking Records Across the University

The Faith & Hope campaign achieved historic results for Fordham. The 2017 fiscal year was the most successful single year of fundraising in the University’s history, at $75.8 million. This year, the University’s Development and University Relations (DAUR) division was recognized with a 2019 Educational Fundraising Award for sustained excellence in fundraising programs over the past three years, putting Fordham’s advancement effort among the top 90 colleges and universities in the nation.

At the 2019 Fordham Founder’s Dinner, nearly $2.6 million was raised for Faith & Hope—specifically the Founder’s Undergraduate Scholarship Fund. It was the second-highest amount in the event’s 18-year history, with 100% participation from the Board of Trustees and the President’s Council. During the years of the campaign, the annual event raised nearly $12 million to support Founder’s scholars.

Nearly a million dollars was raised on Fordham’s third annual Giving Day last March—the most successful Giving Day to date. More than 3,000 participants—alumni, parents, students, faculty, staff, and friends of Fordham—raised $933,689 in 1,841 minutes. Most of the donations, which ranged from $1 to $100,000, came from the U.S., but some came from as far as Australia and the Philippines.

One of the campaign’s biggest accomplishments was the creation of the Maurice and Carolyn Cunniffe Presidential Scholars Program—one of the most selective merit scholarships available to Fordham students. Three years ago, the scholarship program was established through a $20 million gift from Maurice J. (Mo) Cunniffe, FCRH ’54, and Carolyn Dursi Cunniffe, Ph.D., UGE ’62, GSAS ’65, ’71. Over the next decade, it will fund a Fordham education—tuition, living expenses, internship, research, and study abroad opportunities—for dozens of talented students. 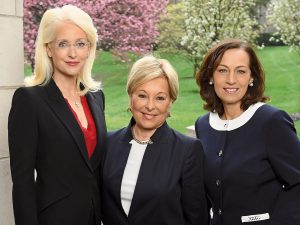 “Each year, Mo and I spend time with these students who are young stars with bright futures,” said Carolyn Cunniffe, a Faith & Hope co-chair. “We hope that they will contribute back to society far more than Mo and I can.”

“This campaign really went to the central mission of Fordham, which is our commitment to higher education and educating first-generation students, and keeping Fordham accessible, regardless of a student’s ability to pay,” she said.

At the heart of the campaign were Fordham students and the donors who helped fuel their future.

In interviews and speeches spanning the past several years, students have described how a Fordham scholarship has changed their lives.

They talked about how a Fordham education helped shape their career paths. For some students, the University’s Jesuit values strengthened their Catholic faith, while others from different faiths said they felt welcome in the University community. Students also praised Fordham’s core curriculum, which encouraged them to connect with their neighbors in the Bronx. And they spoke about how Fordham helped them understand who they are and what legacy they want to leave behind. 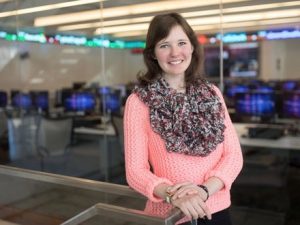 Caroline Koenig, the daughter of seventh-generation French bakers, knew that attending Fordham would be a challenge. In high school, she experienced an injury that dashed her hopes of winning a college track scholarship. Fordham initially gave her a generous financial aid package, but it wasn’t enough. She was taking extra classes to graduate early and considering a commute from Connecticut to save money—that is, until she was awarded the Peter and Carol Howe Endowed Scholarship. It helped her land a summer internship at KPMG and identify her passion for forensic accounting.

“My parents taught me the value of hard work and holding onto your dreams. Because of them and because of Fordham, now I can follow my own,” Koenig said.

The campaign also made a college education possible for Fordham students who, in the face of overwhelming student debt, found it difficult to continue their education. 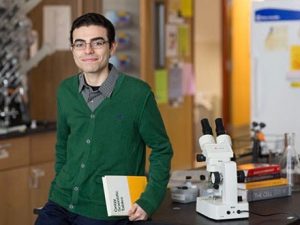 One of them is Muhammad El Shatanofy, the son of immigrant parents who dreamed of becoming a doctor. Throughout his time in Fordham’s neuroscience program, he wondered how he could pay for his undergraduate education without incurring debt. After all, he’d soon be paying for four years’ worth of medical school.

When he found out he was awarded the Founder’s Scholarship, which would pay for almost all his outstanding tuition costs, he was thrilled.

“It really has given me that extra motivation, so that now I just want to accomplish so much,” said El Shatanofy, who went on to mentor 12 high school students from disadvantaged high schools and volunteer at Mt. Sinai Hospital. “I have this drive to make other people happy that they invested in my education and my future.”

For many students, scholarships have left an emotional impact on their lives.

“There’s just no words I can give to express how thankful my family and I are. It takes a big load off our shoulders, and … I’m just so thankful because I wouldn’t be able to go to Fordham without you and apply to grad school,” Jeannie-Fay Veloso, GABELLI ’17, tells her scholarship donor, Robert D. Daleo, GABELLI ’72, in a campaign video. Seconds later, the two alumni embrace in tears.

What It Means to Give

Faith & Hope’s scholarships were made possible through donations both big and small.

Among the campaign’s biggest donors, in addition to the co-chairs and their spouses, were Brian W. and Kathleen H. MacLean, both FCRH ’75; Susheel Kirpalani, LAW ’94; William J. Loschert, GABELLI ’61; Alice Lehman Murphy, the McKeon Family Foundation; Grace A. Dorney-Koppel, UGE ’60, and Ted Koppel; and Alex and Jean Trebek.

Many of them said they give back because they want to support the next generation of leaders and help families break out of the cycle of poverty through education. Some donors once stood in the same shoes as the students they now support.

“I came from a family where my father was a factory worker and my mother worked as a seamstress. I had two other brothers. So if I was going to do it, I was going to do it on my own—and my brother, too,” said Daleo, honorary campaign chair and chair of the Fordham Board of Trustees, who established a scholarship in his brother’s name. “We both went to Fordham. We both had scholarships, worked and paid our way. That scholarship helped me [and]  made the difference.”

Rosemary Santana Cooney, Ph.D., established a scholarship with her husband Patrick in recognition of her 42 years as a professor and associate dean at Fordham, her belief in generating a diverse student body, and her Puerto Rican heritage. Her scholarship will support minority students across Fordham.

“I was always aware that I was different—an outsider—because I tend to be dark, like my father. And I always worked extra hard because I figured as a woman and a minority, you had to work extra hard … I know, sympathetically, how hard these kids who try to make the transition are having to work. And I wanted to make sure that some of them were getting some help,” said Cooney.

For many donors, their Fordham experience gave them not only academic, social, and life skills—it showed them what they’re capable of.

“It’s taught me things about myself that I didn’t even know before,” said Sophie Scott, FCLC ’18, who studied journalism and now works as a production assistant at CNN. “Fordham literally showed me the world in a way I didn’t know possible, and a way I could fit into the world.”

Scott, echoing a sentiment shared by many donors, said she hopes to give that same experience to someone else.

“It literally brings me no greater joy than to think that someone else could be having that same experience—someone who, from a financial perspective, may not be able to,” said Scott, who serves as chair of the Young Alumni Philanthropy Committee at Fordham.

Faith & Hope marks the third of Fordham’s biggest campaigns since the early 1990s—a growing list of campaigns that are already transforming the world.

“It really is a win-win for both the donors and the students,” said Salice. “And ultimately, the world at large.”

Now that the University has successfully closed Faith & Hope, administrators and volunteers are planning for the launch of a new fundraising campaign that will be focused on enhancing the student experience and will include the construction of a new campus center at Rose Hill.