skip to main content
Return to Fordham University
You are at:Home»Living the Mission»Faculty, Students, and Community Partners Explore the Future of Engaged Learning at Fordham
Father Mick McCarthy, at right, during a breakout session with students, community partners, and scholars. Photos by Argenis Apolinario
Fordham’s Center for Community Engaged Learning held its first symposium on March 6 at the Lincoln Center campus, focusing on its mission to integrate faculty teaching, research, and student coursework with community engagement. Professors who have been conducting community-engaged learning courses at Fordham and other regional universities shared their experiences with an audience of fellow faculty, students, staff, and community partners.

Appropriate for this time of uncertainty—the event was one of the last held on campus before the University canceled events due to the new coronavirus—the day’s keynote lecture focused on anxiety and environmental stressors. David Marcotte, S.J., associate professor of psychology, known for his teachings on the psychology of well-being, was asked to deliver the Romero Lecture, sponsored by the Romero Center of Camden, New Jersey. Teresa Garibay, director of the Romero Center Ministries, said it was the first time a Romero lecture was given outside of South Jersey and not to their local supporters. For several years, students from Fordham volunteered with the center’s Urban Challenge Program, a service-learning retreat that brings students into contact with Camden’s underserved communities. Fordham students who participated in the program over winter break were on hand to welcome Romero Center staff to campus.

“We have had a relationship with Fordham for years, but for this lecture, it is a very different audience,” she said. “It’s nice to see professors and students who came and volunteered in January.”

Father Marcotte’s lecture followed the panel of Fordham professors who discussed how they were integrating community-engaged scholarship into their classrooms. He encouraged the audience to foster a “culture of engagement,” but he reminded participants to maintain their own well-being. Seeing the need and suffering of fellow community members can take a toll on students and faculty alike, he said.

He said humankind has made significant progress, including a global poverty rate that dropped from 90% in 1900 to 10% today and a literacy rate of 90% worldwide for those under 25 years of age. And yet, while global challenges have become more integrated, worldwide responses have become more fragmented.

“We may enjoy many advances, but they’re not universal,” he said.

He noted that 91% of American young people from 15 to 21 years of age experience some physical or emotional symptoms of stress. Anecdotally, he said, his own students say they are under a lot of stress in school, but mostly affected by factors off-campus. Specifically, he cited an American Psychological Association study that found that 75% of young people are scared of mass shootings, 57% are concerned about deportation, and 53% experienced sexual harassment. He emphasized that the World Health Organization defines well-being not simply as an absence of disease or physical harm, but also of being mentally well with the ability to thrive. He charged the crowd with taking care of themselves first before going about their business of engaging with others.

“In building programs for both students and for the community, the more you can focus on building on strengths and abilities, I think you’ll get further down the road than trying to fix weaknesses later,” he said.

It’s a notion that Arto Woodley, Ed.D., executive director of Community Engaged Learning, referred to as an “asset-based approach” to community engagement.

“Community leaders are not waiting for us to save them,” he said. “Their needs will always exist and we don’t have the capacity to help that, but the question should be, ‘How can we strategically combine our assets with their assets to build great capacity?”

He noted that many of the professors who participated in the morning session found that by teaming with community organizations, they and their students developed as “humble listeners.”

“They’re incredibly creative and they are all moving past their own expertise in ways that are pedagogically very helpful in advancing the mission of the University,” said Father McCarthy.

But several in the audience, including Woodley, said they hoped the symposium would advance service learning beyond the perception of novelty courses.

“The faculty need more incentives than disincentives, but they have all these barriers,” he said. “Most departments will say wait till you’re tenured before doing this kind of work, but this is an institution that says it values this work. We need to work it into the tenure system.”

Jackie Reich, Ph.D., chair of the Department of Communication and Media Studies and member of the Reimagining Higher Education Initiative, echoed a recent talk at the University given by Cathy N. Davidson, Ph.D., author of The New Education (Basic Books, 2017). Davidson suggested reworking the academic reward system so that there is parity between all aspects of a faculty member’s work.

“We need to restructure the academic reward system of teaching, research, and service so that they’re not separate silos,” said Reich. “We need to bring those all together and I think community-engaged learning and scholarship provides such a great model for that. We need to create a reward system for faculty who do this kind of work because it is so labor-intensive.”

An afternoon session examined the very specific angle of community-engaged learning with a panel of scholars teaching and researching within the criminal justice system. Professors from Columbia University, Nassau Community College, Pace University, Fordham, and the nonprofit Prison-to-College Pipeline discussed the challenges and opportunities of each of their programs. 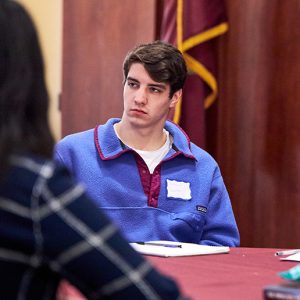 The symposium wrapped up with a breakout session of roundtable conversations focused on defining engaged scholarship specifically at Fordham. Fordham College at Rose Hill junior Nathaniel Guenther went so far as to say that community-engaged learning should become part of the core curriculum, particularly for first-year students.

“I was able to voice my opinions on what community-engaged learning has meant to me in the past and what improvements can be made on in the future,” he said of the session. “To have my opinions heard by Fordham alumni and professors looking to expand these kinds of courses was helpful for both parties.”