skip to main content
Return to Fordham University
You are at:Home»Campus Locations»Eva Badowska Appointed Dean of Graduate School of Arts and Sciences

Eva Badowska, PhD, who has served as interim dean of Fordham’s Graduate School of Arts and Sciences since January 1, has been appointed to the position permanently, effective July 1, 2015.

Badowska, an associate professor of English and comparative literature, was made acting dean of GSAS last June and served in that capacity through December 2014. She was the GSAS associate dean for academic programs from 2012 to 2014. 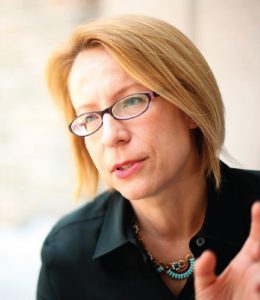 She joined Fordham in 2000 as an assistant professor of English and, in 2006, became a tenured associate professor. She directed the comparative literature program at the Rose Hill campus from 2004 to 2007, served as associate chair for undergraduate studies in English from 2007 to 2009, and served as chair of the English department from 2009 to 2012.

Since the fall of 2013, Badowska has chaired the President’s Task Force on the Future of Liberal Education, a University initiative to examine liberal arts education and articulate its value in the current higher education environment. In a recent article for Inside Higher Ed, Badowska discussed the ways in which liberal arts education might move forward to meet today’s knowledge economy.

“A fine scholar, award-winning educator, and experienced administrator, Dr. Badowska has done an outstanding job in guiding GSAS as acting dean and interim dean,” said Stephen Freedman, PhD, University provost and professor of ecology and evolutionary biology. “Father [Joseph] McShane and I are very pleased to announce the appointment.”

Badowska holds doctorate and master’s degrees in English from Cornell University and a bachelor’s degree in English, with first-class honors, from the University of Sussex. While at Cornell, she received the Stephen and Margery Russell Distinguished Teaching Award, the university’s highest recognition of teaching excellence.

Prior to joining Fordham, she was a lecturer on literature at Harvard University, where she twice received the Hoopes Prize for undergraduate mentoring.

Badowska has written scholarly works on the Victorian novel, feminist theory, psychoanalytic criticism and theory, and Polish poetry. She is co-editor of a book forthcoming from Fordham University Press this fall, titled Of Elephants and Toothaches: Ethics, Politics and Religion in Krzysztof Kieślowski’s Decalogue.