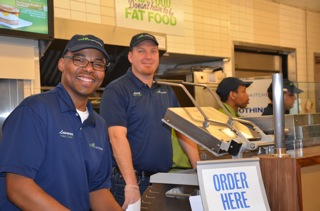 The Lowenstein Center’s Ram Cafe underwent a transformation over the winter break, as workers transformed the food service area into a much more fast-paced environment.

A new menu has also been unveiled, as Sodexo, the University’s food service partner, has signed a franchise agreement with Energy Kitchen, an up and coming chain that eschews fried foods in favor of dishes that are grilled, baked or steamed.

The company, which has seven locations in Manhattan, one in Syosset, one in White Plains and one at St. John’s University, was chosen after Fordham and Sodexo spent the past 16 months consulting with the United Student Government’s food services committee.

“It’s quick, fast, low calorie, and healthier than a lot of other fast food options. It also fit the bill as far as what students were looking for in that cafeteria,” said Keith Eldredge, Dean of Students at the Lincoln Center Campus. 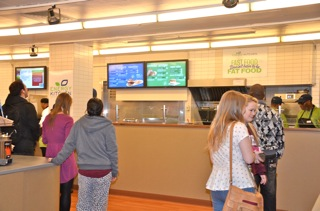 “There’s this idea of preparing the food in front of you, so people can see what you’re putting into it, it’s fresh and not stuff in the back somewhere that’s been sitting in trays, drying out,” Eldredge said.
The new layout, which eliminated a service island and a turn style, also gives greater emphasis to the preparation.“We’re so limited with space and other resources. You can’t get a food court like you might see at a big state institution, but this gives us some fast, healthy alternatives, which is what our students are looking for.”
Brian Poteat, general manager at Sodexo, said Energy Kitchen appealed to students because of its emphasis on healthy options, including vegetarian dishes.

“Today’s students are a lot more savvy when it comes to what they’re eating, and we have such a small and limited space here,” he said.

Energy Kitchen joins Red Mango as the second brand name vendor at the Lincoln Center campus. The Rose Hill campus once featured a Sbarro, and currently features a Starbucks. Poteat said a Jamba Juice Express is expected to open there in the next few weeks, at the McGinley Center.

“We’re looking where we can fit into our existing spaces those concepts that we feel match the demographics of the students. Even five years ago, students were looking for different things than they are now,” he said.

Alexa Rodriguez, president of United Student Government, Fordham at Lincoln Center, said the quality of the food and the pricing, which is lower than the Energy Kitchen’s other locations, were the biggest concerns for students.

“So far the feedback has been pretty positive. Students really like the fact that its healthier,” she said.