skip to main content
Return to Fordham University
You are at:Home»Inside Fordham»Lectures and Events»Jubilarians From Eight Decades Celebrate at Rose Hill
Photos by Chris Taggart and Bruce Gilbert
From the family-style picnic on Martyrs’ Lawn to the dance floor under an Edwards Parade tent, more than 1,700 alumni, family, and friends reminisced to Sinatra, Springsteen, and Sia during the Jubilee reunion weekend, June 2 to 4. 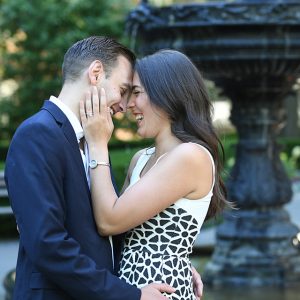 Nicholas Delligatti and DeAnna DiNapoli, both GABELLI ’12, were one of three couples to get engaged at Jubilee.

A total of more than $72 million was raised in this five-year Jubilee cycle in time for the University’s Dondransbicentennial year, and alumni spanned multiple generations of Rams—including the Class of 1942, represented by 97-year-old Lionel Weinstein, PHA ’42.

The event also celebrated the close of the 175th year—in which several events have honored Fordham’s efforts to “break the circle of poverty” for 19th-century Irish immigrants, said Joseph M. McShane, S.J., president of Fordham.

In a welcoming speech in Duane Library’s Tognino Hall, Father McShane said Fordham continues to be a “factory of hope” for the nation and the world. He spoke with pride of a diverse array of alumni that has included several pro athletes, broadcasters, writers, scientists, Fulbright scholars, and five Medal of Honor recipients, all of whom were “called on by God to be great.”
“Lou Gehrig wasn’t the luckiest man in the world; I am,” he said of his 14-year tenure as University president.

He quoted his father, a first-generation college graduate, as having said that when he graduated from Fordham “his whole family graduated” with him.

“It’s our duty to make sure that others have the same opportunity that he had, that you had, and I had,” said Father McShane.

At events across campus, alumni recalled hardscrabble journeys echoing those of their 19th-century peers.

At a CSTEP reunion, Renee Hernandez, M.D., FCRH ’94, celebrated with his wife Madeline Hernandez, FCRH ’94. The two met and married on campus, and continue to bring their children back. Born and raised in the borough, Dr. Hernandez said that as a student he thought of Fordham as a “paradise in the Bronx.” Today, he invites high school and college students to intern at this private practice.

“A lot of it is about exposure, so for the high school students it’s an eye opener that anything is possible,” he said, “and for college then its opening their eyes to other things that are possible, like going to med school, getting a Ph.D., or going into law.”

Jason Atano, FCRH ’01, LAW ’04, said it was clear that Fordham has invested in the program, creating a growing community that comes back to campus each year.

“We come from communities that don’t have a high level of human capital, and this type of program provides us with access to mentorship. Now we’re able to pass along the lessons that we learn while navigating the professional world,” said Atano. “I always try to come back. You know who the students are because you were them 10 years ago.”

As Pierre Lehmuller, UGE ’57, GSE ’59, joined other alumni at Loyola Hall for “Mix and Mingle with the Jesuits,” he recalled a time when lay people were rarely granted admittance to the former Jesuit residence.

“When I had to meet a Jesuit on campus, we had to meet out on the (Loyola) porch—even if it was cold,” he said.

He said that he was finally granted admittance after he joined what was once known as the Alumni Federation. 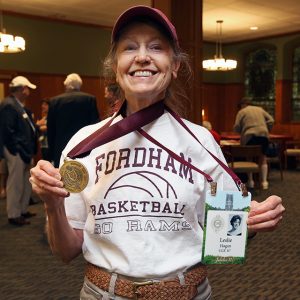 From Broadway to the Bronx

Mary Guardiani, UGE ’62, GSE ’92, reveled in memories at the reception for students who attended Fordham at 302 Broadway. Guardiani recalled taking a class on research methods once at Rose Hill, in which she was one of only two women; it contrasted starkly with the co-ed atmosphere of her base campus in downtown Manhattan.

“It was a very interesting experience because I learned the Jesuits weren’t interested in anything but developing your abilities,” she said. “[But] the [male]students had more problems with women in the class.

“The Jesuits’ . . . message was picked up quickly, that you had to focus on this very difficult course and that was it.”

She recalled that 302 Broadway had a large contingent of commuters from her home borough of Staten Island. “You had a community of people on the ferry boat, where you’d meet and talk for a few minutes, and then study,” she said.

Alumnae from the women’s college, which closed 10 years ago, gathered in Butler Commons to share a few tearful moments and memories from the Tarrytown campus. 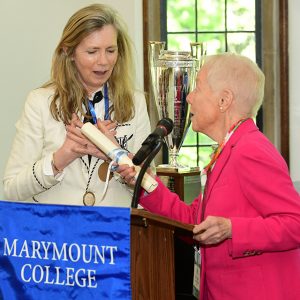 Mary Randolph Carter, MC ‘67, an executive at Ralph Lauren, received the Alumna of Achievement award and gave a moving speech in which she quoted appreciations of the college from fellow alumni. But it was her story that most moved the crowd.

Carter shared an anecdote of having to miss the Marymount graduation for an honor at Mademoiselle Magazine, but that her mother had shown up at Marymount to “clap loudly” when her name was read anyway. The Marymount alumni surprised a tearful Carter by presenting her with her her diploma. She said she planned to share the diploma with her 95-year-old mother.

“’Mom,’ I’ll say, ‘I think I finally made it to my Marymount graduation!’”

At the Graduate School of Arts and Sciences (GSAS) reunion, Dean Eva Badowska, Ph.D., encouraged alumni to explore the 100-year-old history of the school. She said GSAS prides itself on having been “open to a diverse group of students and faculty” over the years, including those fleeing from Nazi persecution, such as Nobel-prize-winning physicist Victor Hess.

Sharon Dietz-Dubois and Ellen Clark, both 1986 graduates, recalled the efforts of Gerald Quinn, the late dean, to make their education at Fordham possible. Clark said Dean Quinn let her postpone, rather than forfeit, her scholarship for a year for personal reasons. Dietz-Dubois said a conversation with Dean Quinn, in which she told him she’d run out of tuition money, changed her trajectory for good. 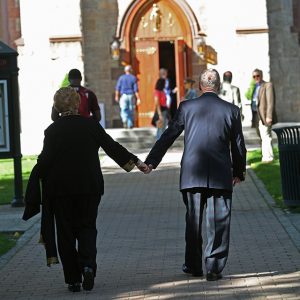 “I came to Fordham on a wing and a prayer,” said Dietz-Dubois. “He told me ‘I’m giving you a graduate assistantship. You are going to work in my office.’ I felt like I was saved. Because of that conversation, I was able to continue my Fordham education.”

Members of the Class of 1972 viewed a documentary about tumultuous times on campus, including a student takeover of the President’s office led by the Students for a Democratic Society. The film featured 16mm black-and white-footage of student protests, demonstrations, and arguments about the war. Contemporary interviews balanced the narrative with the perspective and wisdom that comes with age.

This was not the peace and love portrayal often associated with movies and documentaries about campus life from the period, but rather “the gritty struggles against capitalism and the Vietnam War waged by blue-collar kids in commuter schools,” said the film’s producers.

Together with Michael Bryce, FCRH ’72, and Mary Colonna, TMC’72, Robert J. Reilly, FCRH ’72, LAW ‘75, assistant dean of the Feerick Center for Social Justice, moderated a discussion that revealed how their participation in the confrontations altered the course of the alumni’s lives.

Participants recalled the very real life and death consequences that the war brought to campus. More than one alumnus recalled the screams emanating from dorm rooms when draft numbers were called. And yet not all students were against the war or having ROTC on campus, alumni said. 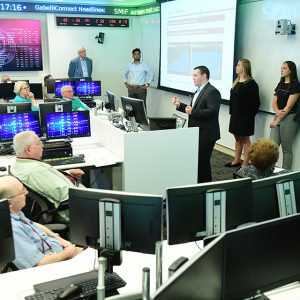 At the Gabelli School, a team of students talked about its strategy and choice of asset allocations used to invest a $1 million portion of the University’s endowment, through a two-semester course titled Student Managed Investment Fund. The team produced a 5.44 percent return for the semester, outperforming their benchmark.

Clarissa Cartledge, rising senior, said that part of the students’ success rested on the choice of a pharmaceutical company, Acorn, that had a merger and rose 52 percent.

“That was a really nice investment,” she said.

The course was also invaluable for its real-world aspect, said Cartledge.

“Because it’s real money you feel it is a real job, even though it’s a four-credit class. Everyone is motivated to improve the fund’s performance. We watch the news, we follow the companies and challenge each other to make correct decisions.

“We’re grateful for the opportunity to invest the endowment, and to have the confidence of Fordham behind us as well as the learning experience they are giving us.”

In the Walsh Library, a small contingent of alumni from Fordham’s Bensalem, an experimental college which opened in 1967 at a residence on East 191st street, gathered to reminisce. Rita Charon, M.D., a 1970 graduate, said it was a time when “the world was exploding” with the Vietnam war and a thriving counterculture.
“I was a Catholic girl from Providence, Rhode Island, and my parents let me come to New York only if I studied with the Jesuits,” she said.

Bensalem’s theme was how best to learn outside of a rigid classroom structure and an enforced ideology, and to cultivate an open mind, she said.

“Those of us who were there from the beginning . . . we’ve never given it up. We’ve been against the grain,” said Dr. Charon, founder and director of the Program in Narrative Medicine at Columbia University. “That’s why we were attracted to it.”

Janet Sassi contributed to this article.