By his own account, Patrick Leahy, FCRH ’70, LAW ‘76, was never a “big” gift giver to Fordham—but he was a consistent one.

“I didn’t give until I had a regular job and I think my first gift was $100,” recalled Leahy, who has been giving for years and recently pledged a total of $684,000 to the University. “Now that I’m retired, I’m able to give back to a place that deserves it.”

Over the past few months, Fordham has quietly begun to recognize donors who have given to the University consistently for more than 20 years. They are being distinguished through a newly formed program called the Doty Society, named for the late George E. Doty, FCRH ’38. 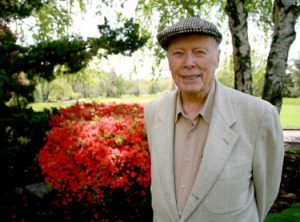 The late George Doty gave more consistently than anybody in the University’s history. Now the University has named a society of consistent donors in his honor.
(Photo by Patrick Verel)

The society is named in Doty’s honor because he was a consistent giver from 1957 until his death in 2012.

“The society doesn’t differentiate between donors that may have skipped a year here or there,” said Susan Ball, senior director of the Fordham Fund. “And the giving can be any amount, as long as it’s regular.”

Leahy, who grew up of modest means just a few blocks from the University, was the son of a train conductor. He said he wouldn’t have been able to attend Fordham had it not been for a New York State Regents Scholarship.

“I’m sure there’s still a lot of people in the Bronx who would find it difficult to go to Fordham these days as well,” he said.

Over Jubilee weekend, several University gift officers distributed pins to new society members, like Peggy Ferguson Boyd, FCRH ’90. The youngest of eight children, she was the only one to go off to college. She said she received a variety of grants that helped make her education possible.

“I give because it’s important for the institution to bring people like myself, who didn’t come from a strong financial background or a legacy family, to be able to come to Fordham,” she said. “Some years I gave $200, some years $50, but it adds up.”

“No matter what amount it was, I always gave,” said the 92-year-old lawyer.

Lucianna began at Fordham in 1942, but soon left to join the Army Air Forces during World War II. When he returned to Fordham, he became the captain of the track team. His granddaughter, sophomore Elizabeth Wafer, is now a member of the women’s track team.

Back then he commuted from Englewood, New Jersey, where he eventually started his law practice. His daughters Nancy and Diane Lucianna are also graduates of Fordham Law. Diane is a partner with her father in Hackensack, and Nancy has her own practice in Fort Lee.

Lucianna, who practices criminal law, credits Fordham with providing him with ethics that have kept him from “stepping over the red line.” He added that the University fostered in him a firm belief in redemption, even for some of the most hardened criminals.

“I go to Mass every day. It’s hard, but I do it—and I still make it in to court in time,” he said. He said that the mixture of immigrants and hardworking students he encountered at Fordham “were some of the best people I’ve ever met.”

“I have an outstanding debt to Fordham that I can’t forget. I’ll keep contributing as long as I can.”