skip to main content
Return to Fordham University
You are at:Home»University News»Daniel Sullivan, S.J., Longtime Biology Professor and Adviser, Dies at 91
Photo by Patrick Verel
Daniel J. Sullivan, S.J., FCRH ’50, GSAS ’58, a professor emeritus of biology who first set foot on the Rose Hill campus in 1946 and was still advising undergraduates this fall—13 years after he officially retired, died on Nov. 22 at Montefiore Hospital in the Bronx. He was 91.

“He was the embodiment of the Jesuit ideal, expressing his faith through scientific research and teaching. He was also a man of great practical wisdom and a warm and thoughtful colleague. Today the Fordham family mourns with Dan’s friends and loved ones. He will be sorely missed.” 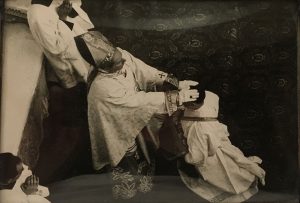 Father Sullivan being ordained a priest in Innsbrook, Austria, in 1961. Contributed photo

A native of Rosedale, Queens, Father Sullivan joined the ROTC as an undergraduate, and was one of the founders of the Fordham company of the Pershing Rifles Military Society. He was commissioned as a second lieutenant in the United States Air Force Reserves in 1950. He entered into the Society of Jesus three months after his graduation in 1950; he was ordained in Innsbruck, Austria, in 1961 and pronounced his final vows in 1979 at Rose Hill.

From the very beginning, Father Sullivan seamlessly paired a love of science with his religious calling. As a seminarian, he earned a master’s degree in biology at Fordham in 1958 before heading to the State University of Innsbruck in Austria for five years of studies under the tutelage of esteemed theologians Karl Rahner, S.J., and Josef Jungmann, S.J.

Before he returned to New York, Father Sullivan earned a doctorate of philosophy in entomology from the University of California, Berkeley, in 1969. There, he trained in the science of biological control, in which beneficial insects are enlisted to attack and control insect pests that destroy agricultural crops. He joined the Fordham faculty that year as an assistant professor, then went on to become a full professor in 1984. 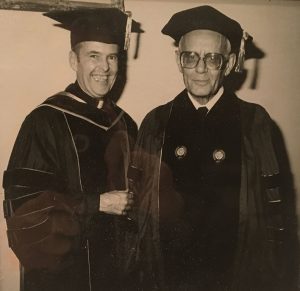 Father Sullivan lent a great deal of his talents to helping the international scientific community. In 1984, he traveled to Nigeria on a Fulbright fellowship to join a team doing research on the cassava mealybug; in 1988, he was a visiting scientist in at the Centro Internacional de Agricultura Tropical (CIAT) in Cali, Colombia. He was also the visiting scientist at the International Crops Research Institute for the Semi-Arid Tropics (ICRISAT) in Andhra Pradesh, India, in 1999 and again in 2004. He also had the honor of serving as President of the New York Entomological Society and President of the Fordham Chapter of Sigma Xi -the Scientific Research Honor Society.

“Non-Catholics sometimes think there’s a contradiction between belief in God and science. It’s not that way at all. It complements it, in fact. I look back on some of the great scientists. Galileo was a Catholic. And Darwin, although not a Catholic, was a religious man,” he said. “And then of course one of the great geneticists, who started genetics, was Gregor Mendel, who was an Augustinian priest.”

An Invaluable Source of Knowledge 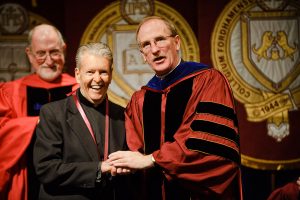 Father Sullivan was honored in 2009 for 40 years of service by Father McShane. Photo by Ryan Brenizer

After retiring in 2006, Father Sullivan stayed on the faculty, living at Kohlmann Hall, and advising junior and senior biology students. At that time, he began sharing office space on the fourth floor of Larkin Hall with Craig Frank, Ph.D., a professor of mammalian ecological physiology and biochemistry, who’d joined the faculty in 1994.

Frank said that the letters of recommendation that Father Sullivan wrote enabled countless students to advance to medical school and graduate programs, and noted that many remained in contact with him after graduation.

In the Fordham News podcast, Father Sullivan shared some of the advice he’d dispensed to students over the years.

“I tell my students that the really great scholars in this world are not gonna give you a hard time. It’s the second-raters that do that,” he said.

Frank said that their office hours only overlapped once a week, but they developed a rapport over the years such that, several years ago, someone taped a picture of The Muppets characters Waldorf and Statler on their door. It was a testament to Father Sullivan’s good humor that he let it stay up, Frank said.

Though the biology department existed before Father Sullivan taught there, Frank said his contributions were numerous and influential.

“He was one of the founding fathers of the biology department. He was a very good friend, very pleasant to talk to, and his wit never diminished with age,” he said.

“He was an invaluable source of knowledge, and I viewed him very much as a mentor, even as recently as last week. I would just love sitting in our office during our office hours together, and just talking with him about university life. We didn’t always agree on everything, but it was always a joy talking to him.”

An Unmistakable Fidelity to Fordham 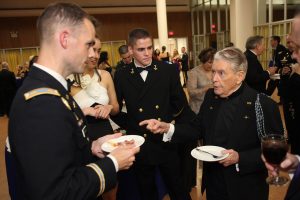 Father Sullivan in 2009, at the annual Pershing Rifles Ball. Photo by Michael Dames

Father Sullivan’s fidelity to the biology department and the University was unmistakable. Every year, the annual newsletter detailing recent events of the department had his byline on it. This year, he penned the paper Historical Profile of the Biology Faculty: Past and Present. He also delivered the invocation and benediction at Fordham’s ROTC’s commissioning ceremony each May. Captain Dan Millican, executive officer and assistant professor of military science in the ROTC program, noted that Father Sullivan attended a 70th anniversary celebration of the Pershing Rifles just two weeks ago at West Point.

“He was a great supporter, and a great influence among the cadets,” he said.

“He could always drive the tone of the room to be more productive, and drive cadets toward service.”

In 2009, Fordham honored Father Sullivan with a Bene Merenti Medal for 40 years of service, citing his career as one that “reflects Ignatius Loyola’s international vision for Jesuits.” Jason Munshi-South, Ph.D., an associate professor of biological sciences, said he was the most dedicated attendee at the department’s annual colloquium. 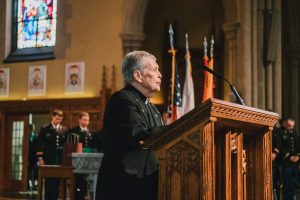 Father Sullivan Army at the ROTC Commissioning Ceremony, on May 17, 2019 at the University Church. Contributed photo

“I can’t imagine these seminars without his presence near the front every week. He was always able to make a personal connection with the seminar speaker given his varied travels around the world as a Jesuit and biologist,” he said.

Patricio Meneses, Ph.D., the chair of the biology department, echoed the sentiment.

“Father Sullivan made me and every new faculty member feel at home from the first day,” he said.

“He was a true scholar, a great colleague, and a great friend.”

A Mass of Christian Burial will take place Tuesday, Nov. 26, at 11:30 a.m. at the Murray-Weigel Hall Chapel, Rose Hill Campus.

Notes of condolence may be sent to a cousin, Kevin Giuliano, 67 Sandburg Place, Pine Bush, NY  12566.