skip to main content
Return to Fordham University
You are at:Home»University News»Cunniffe Meets New Scholars at Luncheon
The six new Cunniffe scholars with their benefactor, Maurice “Mo” Cunniffe. Photos by Chris Taggart
The week before her high school graduation, Grace Getman was watching Netflix at home in Syracuse, New York. Suddenly, she spotted a new financial aid message from Fordham in her inbox. She opened the email. And then she screamed.

“That email dropped in my inbox, and my life changed,” said the first-year student.

She had learned that she was one of the six newest members of the Maurice and Carolyn Cunniffe Presidential Scholars Program, one of the most selective merit scholarships available to Fordham students. These scholars typically graduate in the top 1 to 2 percent of their high school class and excel in academics, leadership roles, and extracurricular activities. The scholarship program was funded through a $20 million gift from Maurice J. “Mo” Cunniffe, FCRH ’54, and Carolyn Dursi Cunniffe, Ph.D., GSAS ’71, two years ago. It not only covers tuition and living expenses, but also internship, research, and study abroad opportunities. The only thing she paid for, said Getman, were her textbooks.

“I could say some clever turn of phrase,” Getman said. “But the truth is that the opportunity the Cunniffes have given is once in a lifetime.” 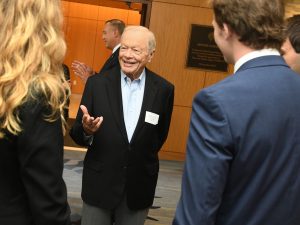 Maurice “Mo” Cunniffe gets to know the new cohort of Cunniffe scholars.

Last Friday, Oct. 5, at the Rose Hill campus, the new cohort of scholars met Mo Cunniffe for the first time. (Carolyn had planned to be there, but was unable to attend.) Meanwhile, the inaugural cohort returned to reunite with their benefactor and greet the second generation. In total, six freshmen and six sophomores have been awarded the Cunniffe scholarship.

“This man and his wife chose to invest in you,” Joseph M. McShane, S.J., president of Fordham, told the students at the lunch meet-and-greet in Bepler Commons. “And in those who will come after you, because first, last, and always, Mo is someone who believes in people. But he expects great things. Is that a fair statement?” he asked, turning to Cunniffe.

The Cunniffes’ plan was simple: pinpoint the best and brightest students, give them the best possible education, and dispatch them into the real world.

“You’ll hire more people, you’ll think of more things to do, you’ll invent a mathematical equation that makes sense,” Cunniffe told the twelve students. “That was my purpose: get a gang of people, out of which someone will make the world better than I left it.”

After Cunniffe introduced himself to the scholars, it was their turn to tell him about themselves.

The students are pursuing studies in an eclectic mix of disciplines: art history, global business, information systems, and mathematics. One student is the treasurer of Stove’s Cabin Crew, a comedy club at the Lincoln Center campus; another is a researcher who, for six to eight hours a week in a neuroscience linguistics lab, studies people’s brain waves while they read different languages.

One of the new scholars is Bryce Tayengco, a global business major at the Gabelli School of Business, who loves everything about the Lincoln Center campus: exploring the city every morning on his bike, wandering through Washington Square Park, attending a class in which he helped design a business plan. 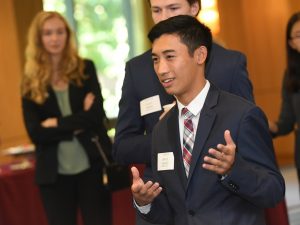 First-year student Bryce Tayengco thanks the Cunniffes for their investment in his future.

“I’d like to take your investment in my education and put it toward fintech—putting technology into finance,” Tayengco said, directly addressing Cunniffe. “I want to revamp that industry.”

“How did you find us from Lincoln, Nebraska?” Father McShane asked first-year student Mabry Brank, a biology major on the pre-health track.

“I don’t fully remember, to be honest,” she replied. “I think it was kind of an act of God.”

“I’m a big believer in him,” Father McShane responded, earning a round of laughter.

More than 1,000 miles away from Nebraska is a small, rural town in Maine, half an hour away from the Atlantic Coast—the hometown of new Cunniffe scholar Sophie Cote, a math and economics major.

“If you’ve ever seen a Stephen King movie, that’s basically exactly what my town is,” Cote joked. “The first time I ever came to New York was for orientation. I was like, this is the place where I belong.”

It was the right choice for Getman, too.

In her short time at Fordham, Getman, an environmental studies major in Lincoln Center’s honors program, has had an opinion piece published in The Observer and attended a panel on sustainability and affordable housing at Lincoln Center. One day, she hopes to be a lawyer who specializes in environmental law. But for now, she’s still remembering the moment it all began.

“I yelled for my mother to come down and read this email because I thought I was hallucinating. I also had her pinch me. It’s really something to …,” Getman began, searching for the right words. “Not only appreciate, but to live up to, knowing that these two people have this amount of faith in me and what I can do.” 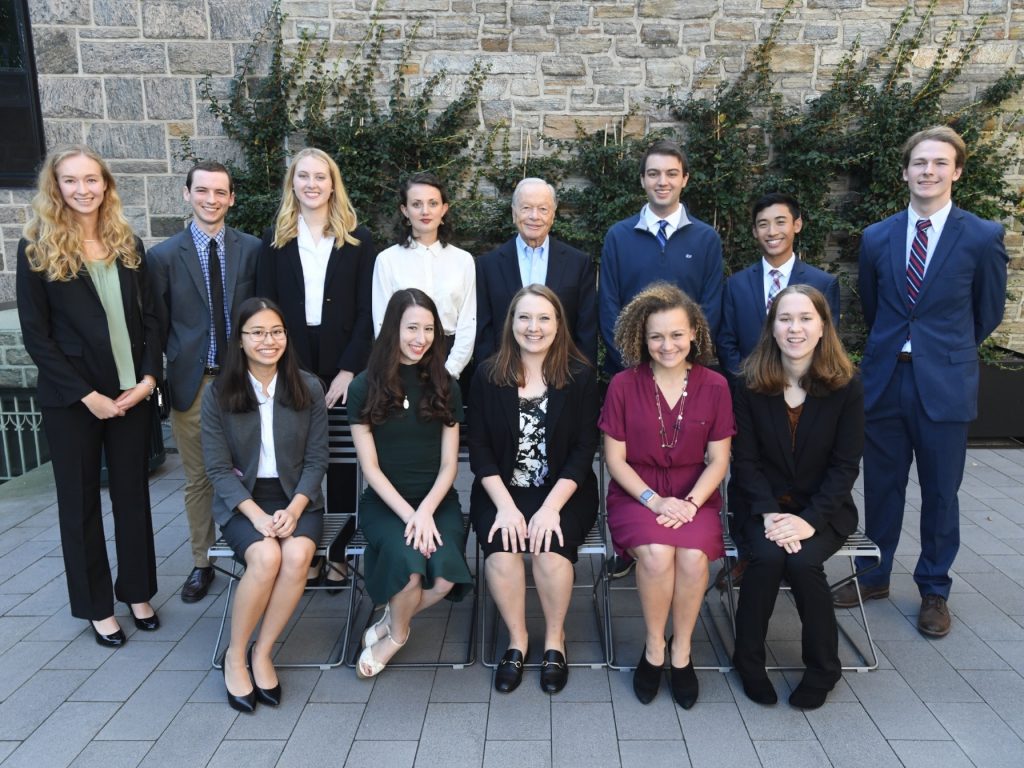