skip to main content
Return to Fordham University
You are at:Home»Inside Fordham»CSTEP and HEOP Award Winners Travel the Road to Success 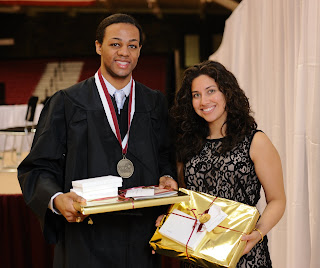 Fordham College at Rose Hill students who won the University’s CSTEP Scholar Award and HEOP Award are poised to excel in the academic and professional pursuits waiting for them after graduation.

Both credit Fordham with providing the foundation they will need to follow their dreams and face life’s challenges.

White said his dual major in history and Spanish language and literature has set him on the path to a career in international law with a focus on global environmentalism.

“It’s an expertise we’ll need to survive as a global community,” he said. “I feel it’s a way I can do a lot of good in the world.”

In pursuit of his goals, White received support from the Collegiate Science and Technology Entry Program (CSTEP) at Fordham, a statewide initiative to prepare minority students for careers in areas where they are under-represented, such as science, technology, engineering, mathematics, health and licensed fields.

White also received a Benjamin A. Gilman International Scholarship from the federal government to spend a semester in his junior year studying in the Dominican Republic.

The following summer, he used a George McMahon, S.J., Travel Fellowship from Fordham to complete a research project in Puerto Rico, where he examined how women use reggaeton music to redefine and improve their social status.

Coming to Fordham was a “logical transition” for White, who attended Gonzaga College High School in Washington D.C., which is also a Jesuit school. “This education changed my life for the better,” he said. “Learning how to be somebody for others serves as a great basis for the future.”

While he is still considering other offers, White is fairly certain that next year he will be attending St. John’s University Law School on a full academic scholarship.

Like White, Pérez sought an international focus in her studies at Fordham. A joint major in French language and literature and Middle East studies, Pérez is considering pursuing a career in diplomacy, linguistics or interpreting.

Although Pérez attended St. Jean Baptiste High School in Manhattan, she did not initially consider applying to Fordham. She was encouraged to do so, however, by a student services counselor with connections to the University, who sent her transcript to the Higher Education Opportunity Program (HEOP) at Fordham.

Pérez said that her acceptance into the HEOP program, and the financial support it provided, made all the difference in enabling her to attend Fordham. The New York state-administered program was created in 1969 to provide educational and financial assistance to students who demonstrate the potential for academic success.

In the fall semester of her senior year, Pérez studied in Marseilles, France, where she participated in a community service project, working side-by-side with recent North African immigrants to bake bread for local restaurants and homeless shelters.

Her experiences abroad made a lasting impression on her. “It was something I will never forget,” she said. “I made it my goal to go there to understand another culture and be a part of it.”

Her experiences working with recent immigrants also opened her eyes to the specific hardships and social problems faced by these groups in Europe.

Pérez hopes to continue her education on the graduate level. A native of Honduras, who moved to the United States with her mother and brother when she was nine years old, she will now apply for United States citizenship so she can qualify for fellowships and grants.

Looking back at her time at Fordham, Pérez said that two things stand out. “The Walsh Library has been my home,” she said. “It has been a blessing to have a such a library.

“My connections with my professors were also important to me. I was able to build strong relationships with a few of them who have guided me toward what I should do in my education and in my career.”