skip to main content
Return to Fordham University
You are at:Home»University News»Crew, Hockey Club Teams Finish Out Year on Top

Fordham club teams had tremendous success on the water this spring, be it flowing or frozen.

On April 7, the men’s crew team captured the Secretary of the Navy Cup at the prestigious San Diego Crew Classic, held every spring in the city’s Mission Bay, by besting University of California, Santa Barbara, 07:01.166 to 7:06:546 in a head-to-head race.

In a ceremony at Cunniffe House on April 26, the team presented the cup to Joseph M. McShane, S.J., president of Fordham. 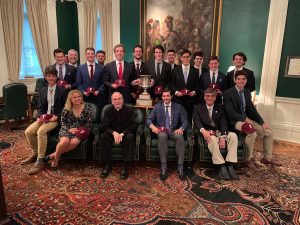 Both the men’s club, which was formed in 1915 and revived in 1957, and the women’s varsity crew teams have been under the direction of Coach Ted Bonanno for the last 30 years. During his tenure, he has had 10 undefeated crews and 19 national championships—13 at the Dad Vail, three at the ECAC National Invitational Collegiate Regatta, and one each at the Division-I national championships, IRA Championship, and U.S. Rowing Collegiate Championship. The men’s team won the Visitors Cup in 1992 at the Crew Classic, and almost captured the Secretary of the Navy Cup in 1994, narrowly losing in a photo finish to Harvard University. Both the men’s and women’s teams have also won and broke course records at the Head of the Charles regatta in Boston.

The teams train on the Eastchester Bay, the Long Island Sound, and the Hutchinson River. They launch from the Harlem Yacht Club, which is on City Island in the Bronx.

The men’s hockey team, which like crew is a club-level sport, also ended its season with a milestone: its first appearance in the American Collegiate Hockey Association’s national championship. The championships were held March 21 to 31 in Frisco, Texas. To get there, the team had to best Springfield College and George Mason University at a regional tournament in West Chester, Pennsylvania, earlier that month; they did so with scores of 6-3 and 7-1, respectively. The team won the Metropolitan Collegiate Hockey Conference championship for the second year in a row, and presented the trophy to Father McShane on April 26. 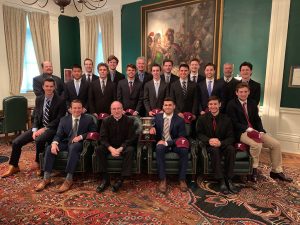 The hockey team finished the season with a 27-5-2 record. Contributed photo

Beating George Mason was especially gratifying, said hockey team director of operations Andrew Mola, GABELLI ’86, because Fordham lost to them in the same tournament last year 3-2. Under the direction of Coach Rich Guberti, the team finished the year with a 27-5-2 record.

Although the team won two out of three games in pool play in Texas, and thus did not advance to the semi-finals, it was still a big achievement, said Mola.

“All things considered, this was the first time we have ever gotten this far. We’ve never been to nationals before, and we’ve been around since 1970,” he said.

“This was a huge accomplishment for our program.”