skip to main content
Return to Fordham University
You are at:Home»Inside Fordham»Lectures and Events»Commissioner Calls for Unity Among People with Disabilities

“Everyone forgets that the ‘D’ in diversity stands for disabilities,” said Victor Calise, commissioner for the Mayor’s Office for People with Disabilities (MOPD). “People with disabilities should be leading that conversation when it comes to diversity.”

The commissioner made the remarks on March 28 at a talk sponsored by Fordham’s United Student Government and the Faculty Working Group on Disability. He said that when conversations turn to diversity, people with disabilities are often left out of the discussion because attention typically focuses on the voices of other minority groups, including black, white, Muslim, Asian, LGBTQ, and women’s groups.

“We work in our individualized zones, but we have to find a way to band together,” Calise said.

Calise said that many of those who fought for disability rights are growing older, and the next generation grew up with the benefits of the Americans with Disabilities Act (ADA). This new generation, Calise said, needs to be more engaged.

Covering the Cost of Civil Rights

To encourage their involvement, MOPD has set up a youth council, but advocacy work remains, Calise said. Unlike other civil rights movements, disabilities measures can be harder to fight for because they can come with costs: Building a ramp, providing an interpreter for a meeting, or including assistive technology are just some examples.

“That price tag is another obstacle to overcome,” he said, noting that making that cost just another part of what the city does is the key ingredient. 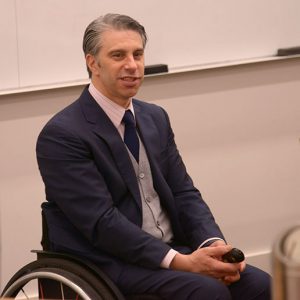 In transportation, Calise said that of the more than 400 subway stations operating in New York City, about 100 of the stations will be wheelchair-accessible by 2020. To fill in the transportation gaps, the city and state has relied on an Access-A-Ride system since 1979. It costs taxpayers an average of $65 per ride. If the decision had been made to make the subways accessible back then, the renovations would have paid for themselves because less money would have been spent on Access-A-Ride, and the overall system would be “a lot cheaper and efficient,” he said.

The city is installing a ‘wayfinding’ system, Accessible Pedestrian Signals, that assists people who are blind or have low vision to navigate crosswalks through beep tones and vibration, he said. Due to the high expense, the office is researching ways that it could consist of a less expensive technology alternative, using GPS, Bluetooth, and beacons.

An advocate for public-private partnerships on accessibility projects, Calise said his office is working with the Department of City Planning to incentivize developers to create accessible subway entrances.

But it’s the area of employment, Calise said, that concerns him most. With a workforce more than four million strong in New York City, only 4 percent of persons with disabilities are employed.

“It’s a poverty issue when we look at it,” he said.

And it’s not for lack of talent, he said. There are 9,000 students with disabilities in the City University of New York’s institutions. But while education may prepare these students for careers, the transition to the workforce is often a scary proposition.

“They’re afraid to leave the system,” he said. “It’s a real barrier to employment.”

Calise, who is paralyzed from the waist down from a spinal cord injury, said he knows firsthand that one of the biggest fears of going to work is losing benefits that help cover the costs often associated with medical care a person with disabilities needs.

“I was so scared to make money . . . afraid I’d lose all my benefits,” he said. “They included my doctors, my medical equipment, plus the mere $700 a month I was getting from Social Security. [But] that was my safety net.”

MOPD is working to expand employment and career opportunities through its NYC: ATWORK program, made possible through the support of the city, State AccessVR, and private foundations, including the Poses Family Foundation, Kessler Foundation, and ICDNYC.

He said the Department of Education is working to set up “transition centers” in each borough to help students and families dispel the myths about transitioning to college and the workplace.

“Once we’re able to get people around the city in a more efficient way, get them through the education system, get them employment, and get them access to the government, then we’ll start to see the beginnings of true equality.”