skip to main content
Return to Fordham University
You are at:Home»Inside Fordham»Bronx Youths Let the Beat Drop in Berlin 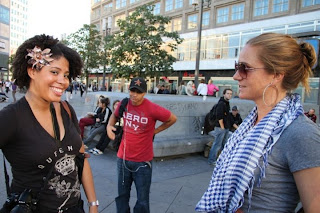 Youths from the Bronx will experience hip-hop culture in Berlin as part of a trip organized by a Fordham professor.

Mark Naison, Ph.D., professor of African and African-American studies, and about 10 students from Bronx-based CUNY Prep are in Germany’s largest city this week for the final leg of Bronx-Berlin Connection—a transatlantic hip-hop project.

Hosted by GangwayBeatzBerlin, a music association in which young people experience hip-hop culture on the streets of Berlin, the Bronx-Berlin Connection engages young people from Bronx and Berlin in a year-round cross-cultural exchange program. They use music—particularly, rap and hip-hop—to explore and express the experiences of urban youths globally, the critical challenges they face and the solutions necessary to enact change in their communities.

The project will culminate in a full-length, multi-lingual, cross-cultural rap album to be released later this year.

An online diary by GangwayBeatzBerlin mentioned, “The crew from the hip-hop capitol of the world arrived today,” referring to Naison, Fordham Graduate School of Arts and Sciences (GSAS) student Kathleen Adams, three CUNY Prep teachers and, of course, the students.

Likewise, Naison is reporting on the experience through the social media. In a Facebook message posted on Saturday, he wrote, “We are having an amazing time in Berlin! We met up with people from GangwayBeatzBerlin, who took us to dinner at a great Turkish restaurant and then took us to a community hip-hop jam in Wedding, an immigrant neighborhood in Berlin, where our kids produced a freestyle cipher. Great chemistry between GangwayBeatz and the CUNY Prep kids.”

A “cipher” occurs when two or more rappers freestyle together in an informal context. But hip-hop is not all Bronx youths have in common with their Berlin counterparts, Naison explained.

“Kids from the Bronx think that their situation is unique. When they get to Berlin, they’ll see lots of kids from immigrant families experiencing similar things—employment struggles, family problems, race issues—and who look at hip-hop as a way to express their feelings about the world they are in,” he said.

Immigrants in Berlin hail from Turkey, the Middle East and various parts of Eastern Europe, said Naison, who previously traveled to Berlin to lecture on the “Multicultural Roots of Bronx Hip-Hop.”

Thanks to GangwayBeatzBerlin, youths from Berlin visited Fordham and the New York City area in November 2008 and again a year later. Many of the young poets and rappers performed at Rose Hill.

“The students for CUNY Prep are going to think they are in the Bronx when they arrive in Berlin. They’ll see ethnic enclaves, graffiti, street food vendors and, of course, hip-hop music,” Naison said before he left.

The trip was subsidized by donations, many which came from Fordham alumni.

“We had an amazing outpouring of support from alumni. Without it, this trip wouldn’t be taking place,” he said.

The CUNY Prep students will perform on Sept. 13 at the United States Embassy in Berlin. They’ll visit and be interviewed at radio stations and a television news crew will be following them as they visit clubs and community centers, Naison said.

GSAS student Kathleen Adams is accompanying the group as a chaperone. A student in the urban studies master’s program, Adams said she hopes to teach youths in Berlin about women in hip-hop, which she researched for her thesis as an urban studies undergraduate at Fordham College at Rose Hill.