skip to main content
Return to Fordham University
You are at:Home»Colleges and Schools»Fordham College at Rose Hill»Bronx History Makers Rewrite the Narrative

First, there was redlining, then there were the fires, and now, inevitably, there’s gentrification. But there was also bebop, bachata, salsa, and hip-hop. And today the borough serves up cuisine from Italy, Albania, the Caribbean, and Ghana. The Bronx has seen it all. Yet too frequently, it’s the fires that outsiders remember and the poverty that grabs headlines, rather than the borough’s rich culture.

On July 23, Bronx high schoolers, mentored by four Fordham undergraduates, presented research that challenged negative stereotypes of the borough. They showed their findings to the community via Zoom as the culmination of the annual Bronx History Makers program, an immersive college-prep experience that began in 2005.

Supported by a grant of $50,000 from the Teagle Foundation, Fordham’s Center for Community Engaged Learning worked in partnership with BronxWorks, a nonprofit community organization, to recruit the high school scholars, the Fordham undergraduate mentors, and faculty for the project, as well as a cross-section of experts on the borough.

This year’s faculty supervisors were Clarence Edward Ball III, lecturer of communications and media management at the Gabelli School of Business, and Gregory Jost, adjunct professor in the Department of Sociology and Anthropology. The program normally runs for six weeks on campus, but because of the pandemic it was reduced to two weeks of preparation for the college mentors and two weeks of research with high school scholars.

This summer, the undergraduate mentors met for two weeks to learn the material that they would be researching with the high school scholars. In the process, they got to know each other well enough to form a tightly organized team. As with the six-week program, the mentors taught the scholars the history of the topics and were charged with supporting the scholars as they navigated research and execute a typical college assignment. The four teams examined issues facing the Bronx, said Ball, including redlining, racial inequities, community policing, and gentrification. The intent was not only to expose the scholars to college coursework, but also to the culture of higher education.

Normally, there would be field trips and the students would stay in student housing on campus with the mentors. But instead, due to the pandemic, the mentors and scholars worked virtually via Zoom. Making a real connection was made possible largely because the four undergraduate mentors were from Bronx families, just like the scholars, said Ball.

“They were able to relate and tell them, ‘College is a real option for you; This is what collegiate behavior looks like; This is how you break down a syllabus,’” he said.

Ball added that the program not only prepares students for college coursework and culture but also introduces them to fields of study that will be available to them, like sociology. This makes the program a great recruiting tool, he said.

Jost’s syllabus for the high schoolers was similar to the ones he prepares for his undergraduate students. In just two weeks, the teens were assigned dozens of articles and academic papers to read in preparation for the presentation deadline. With field trips and dorm room stays eliminated, Bell said the group focused on bringing in an array of weekly guest speakers on Zoom, including Mark Naison, Ph.D., professor of African and African American studies; Maria Aponte, assistant director of diversity and global inclusion in Fordham’s Career Services; columnist David Gonzalez of The New York Times; and Vivian Vázquez Irizarry, producer/director of the acclaimed film Decade of Fire, which focuses on the 1970s South Bronx.

“We were deconstructing tired old racist narratives about the Bronx and young people of color, and using this history and family interviews to reconstruct narratives that center on the experience of our students, their families, and communities,” said Ball. He noted that the scholars collected oral histories from family members and also learned about the borough from documentaries and the Bronx African American History Project.

Jost said that his sociologist’s penchant for collecting data and combing archives to examine the past was complemented by Ball’s business school instinct that the students should also present contemporary solutions to historic problems. It’s was a cross-disciplinary effort that both appreciated and hope to see more of, they said. 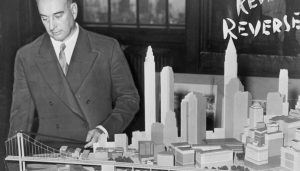 Students examined Bronx History, including the lasting impact that master builder Robert Moses had on the borough. (Image courtesy Library of Congress)

The scholars broke into four teams to conduct their community-based research for the July 23 presentation of their capstone project on Zoom. Viewing the presentation were local members of the community, government representatives, several lecturers from the program, and University faculty and staff.

One of the four presentations, focused on gentrification, was titled “The Replacers.” The scholars used interviews, lectures, news articles, and historic images to conduct their research. The city-wide quarantine limited who the students could reach out to. Scholar Harley Lopez, a rising junior at Manhattan Hunter Science High School, interviewed her grandmother who has been living in New York City for 30 years. Lopez’s interview provided scholars with a first-hand account of an emotional move from Brooklyn to the Bronx caused by increased housing costs. Student presenters said the interview helped them relate to how neighborhood bonds can be severed by rising rents.

For solutions, the team looked to community efforts by tenant associations that address displacement and advocate for residents, students said in their presentation. They referenced a successful 2018 tenants’ class-action lawsuit against New York City Housing Authority for lack of heat and hot water in housing projects during the winter of 2017-2018 as proof that tenant activism works. The scholars did not necessarily turn their backs on newcomers that come with gentrification, but they insisted on “community despite disparity” in their presentation. They suggested that newly built infrastructure, such as condos, include a designated space for cultural expression that could create “unity beyond physical barriers” between newcomers and longtime residents.

Lopez said the research project—and the history she learned—made her understand the importance of local narratives and the disproportionate influence the media can have.

“We live in the Bronx, we grew up here, but we have all of these outside influences that even affect how we see ourselves,” she said. “We deconstructed the phrase ‘black-on-black crime.’ These phrases that are used in the media make us think that we pose more of a danger to ourselves than the system does.”

She said the narrative that the Bronx is a dangerous place has infiltrated Bronxites’ perception of themselves and their borough. She noted that through the History Makers program, she learned about the relative freedom teens had while growing up in the borough in the 1950s and ’60s. Today, many parents, including her mother, perceive the borough to be too dangerous for her to freely go out and have fun with her friends.

“My mom barely lets me go out into my own community … and that really just goes to show how different things are now.”

She said the mentors helped her understand how to take control of the narrative to “debunk myths.”

Learning from the Learners

Jost said he’d like to see more participation from students who did not grow up in the borough.

“At this moment in time, why not?” said Jost. “We need a shift in our world view and to really own the fact that being located in the Bronx is a huge asset to the University.”

Ball said that he was impressed by how quickly the scholars grasped the material, though he added that in some ways it’s not too surprising considering it’s their story. 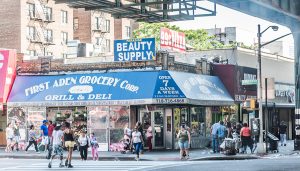 “This is a place you can really depend on,” said high school scholar Maria Torres said of the borough.

“They live the content and the social issues,” Ball said. “I’ve really never seen students this hands-on, but they were really into the granular details because these issues plagued them as well.”

Rising Gabelli School of Business junior Geraldo De La Cruz said he and his fellow mentors became each other’s “guardian angels.” He added that the first two weeks of getting acquainted with each other and the material were crucial.

“Any time that one of us needed an affirmation that they were doing a great job, we would do that for each other,” said De La Cruz.

“Our vulnerability was a big plus,” said Fawziah. “That first week we were sharing our roots, our families, and cultural values. Without that, we would not have had this connection at all.”

In the process, they learned from each other, said Fordham College at Rose Hill rising junior Emily Romero.

“What we learned was teamwork,” said Romero. “If I’m not an expert in one subject, someone else could be, and we just tried to combine all that together and mesh it for the scholars.”

Likewise, they left inspired by the young people they mentored.

“They were so aware of current social issues, activism, and protests,” said Fordham College at Rose Hill rising senior Benita Campos. “They were so passionate to make change.”

“They didn’t let the system define them,” said Fawziah.