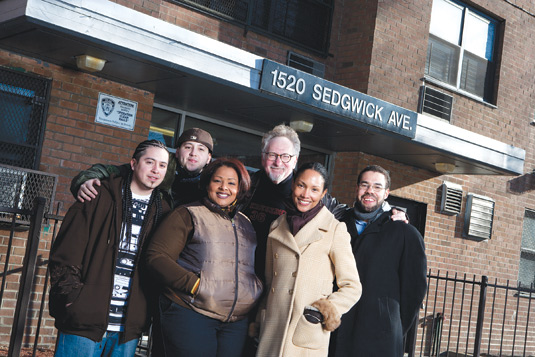 Shhh…. Don’t tell anyone, but there’s going to be a big party on April 6 at the Rose Hill campus.

The Bronx African American History Project’s (BAAHP) 10th Anniversary Conference and Concert ends not with a keynote speech, but with four hours of jazz and hip-hop performances and a dance party that lasts into the night.

“We’re all pumped up about this,” said Mark Naison, Ph.D. professor of African and African American studies, founder, and principal investigator of the BAAHP.

With three panel discussions, two talks, and a keynote address by “hip-hop feminist” Joan Morgan, the conference is fittingly packed, given how large the BAAHP has grown since 2003.

Conference organizer Oneka LaBennett, Ph.D., associate professor of African and African American studies, said the panelists come from two camps: speakers who have worked directly with the BAAHP, and those whose work dovetails with the project’s goals. Some, like Morgan, fit both categories, as LaBennett and Naison interviewed her for her story of growing up in the Bronx.

“We have people who have a direct relationship with the BAAHP, scholars doing research on the Bronx, and activists and organization leaders like Nancy Biberman, who is the founder of WHEDco, the Women’s Housing & Economic Development Corporation,” LaBennett said.

The BAAHP started out 10 years ago as an academic effort to create a database for scholars and people in the community to access the Bronx’s African-American history, and rebut perceptions of the borough as a run-down, drug-infested urban wasteland. In the process, it tapped into an undocumented legacy of the vibrant, grassroots music scene that was born in neighborhoods like Morrisania and spread to the rest of the country.

To date, staff have conducted more than 300 interviews, including stories about the amazing jazz, doo-wop, and hip-hop scenes that flourished in the oft-forgotten borough. The musical aspect of the conference will also feature a world premiere of the “Bronx Suite,” an original composition by trumpet player Jimmy Owens.

None of it would have happened without an army of volunteer collaborators from the community, said Naison. He estimates that half of the interview subjects contacted the BAAHP, requesting to be interviewed.

“I don’t want to say I was this great genius who knew what he was getting into,” said Naison. “But I was lucky enough to be in the right place at the right time, to have time on my hands, and to have a great institution, Fordham, backing me in our quest to give the Bronx people their own voice,” he said.

“The worst of the crack epidemic was over, the crime rate was starting to go down, neighborhoods that had been devastated were now the sites of new housing and shopping centers,” he said. “People were not only ready to tell their stories, but they actually believed there was a chance that people would listen.”

One of those people was Bob Gumbs, a U.S. Army veteran who publishes books on African-American history, who joined the project in 2005. He recruited 15 people to be interviewed, and also contributed his own history of living in Morrisania from 1941 to 1968. On Lyman Place in his neighborhood, it wasn’t unusual to see Thelonius Monk stop by to visit Elmo Hope, an influential bebop pianist.

“I remember hearing people on the block playing trumpets, practicing their drums. That had a lot to do with the identity of Lyman Place, where I grew up,” he said.

It was partly through the project that Gumbs discovered that all of Morrisania was well known for its arts and culture. At one time it had been called the Harlem of the Bronx. He began to realize that his history was a small part of a larger picture of what was happening in the Bronx.

“It’s important for those of us who lived there to show how there was another part of Bronx history that was as good as any other [history]in New York. We might have been poor, but we felt that we were equals.”

The BAAHP has been tied to the Bronx County Historical Society from its inception. Peter Derrick, head archivist for the society before retiring in 2010, said Fordham provided the society with copies of the BAAHP interviews and with student-workers to help him catalogue and summarize them.

“Like most historical societies, we don’t have a lot of money to do our own projects. The BAAHP allowed us to have something we wouldn’t have been able to get—if we hadn’t had Fordham leading the charge,” he said.

Like Gumb, Derrick grew up in the Bronx in the 1950s. But his experience growing up in the area north of Fordham Road was very different, as the population was 99 percent white.
“It was very stable community, and then all of the sudden, in the 1960s, we heard of all this crime and drug use going on. I think a lot of the white people in the Bronx blamed the blacks and the Hispanics for doing something wrong,” he said.

“What I’ve learned from these oral histories is, African Americans moved to the Bronx and worked hard and led normal lives, and up until the mid-50s and early 60s, they experienced the same sort of life as the white folks who moved to the Bronx. This problem of crime and drugs haunted both of our communities.”

Brian Purnell, Ph.D., FCRH ’00, assistant professor of Africana Studies at Bowdoin College and a former member of Fordham’s Department of African and African-American studies faculty, is returning for the April 6 celebration. Working on the BAAHP research team from 2004-2010, he said, proved to be both a professional and personal once-in-a-lifetime experience. It brought him back to both the church where his parents got married and the tenement where his grandmother first resided when she emigrated from Barbados.

“I was a graduate student writing my dissertation and an oral-historian-in-training at the time,” recalled Purnell. “Working on that project was one of the best professional experiences I could have asked for.”

Purnell said the collected oral histories of the BAAHP will be invaluable for researchers looking to understand life in the Bronx.

“This is a unique project insofar as its outcome has been to resuscitate a community that was once thought lost, and to bring variety, diversity, and voices to an experience that was thought to be homogenous and one-dimensional,” he said.

Michael Latham, Ph.D., dean of Fordham College at Rose Hill, said the BAAHP has been a boon for both Fordham and for the Bronx; particularly in the way it has involved Fordham undergraduates in doing original research in the borough.

“The Bronx benefits by having its experiences documented and preserved, and those become part of the cultural memory of that community,” he said.

“Our students benefit by having an engagement with research and exposure to ways of life that really expand their horizons.”

Naison was interviewed by the New York Times on the BAAHP in 2003. In the story, he said, “So much has been written about the falling apart, but not about the community that fell apart, and the excitement of being part of it, the joy.” Today, 10 years later, he says he feels the BAAHP has succeeded in unearthing joy in the South Bronx.

“So many people in the Bronx today have this negative image of the Bronx of yesterday, which is reinforced when they leave the Bronx. People say ‘You’re from the Bronx? That must be scary!’” he said.

“So when we talk about all the people who moved out of Harlem in the ’30s, ’40s, and ’50s to the Bronx for a better life and found these stable, multi-generational, multiethnic communities that produced all these amazing types of music, it gets people excited.”