skip to main content
Return to Fordham University
You are at:Home»Inside Fordham»Books? Bring Them On! 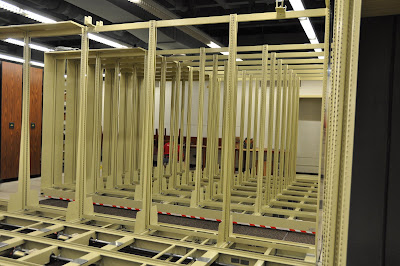 It hasn’t exactly been quiet in the Quinn Library this summer, but the annoyance is about to come to an end.

A major shelving installation project, said Quinn Library Director Linda LoSchiavo, is scheduled to be finished by the beginning of the academic term.

The project, which has been underway all month, will enable the Library to house approximately 290,000 books on electrically operated high density shelving systems replacing stationary shelving. It will boost the library’s total potential capacity to 562,000 volumes.

The new shelving will be used to expand the Quinn collection as well as to hold a portion of the present collection of law library books while the new law school is built. The old law school and its library will undergo a major overhaul to create new space for Quinn Library and Fordham-Lincoln Center’s other professional schools.

LoSchiavo said that Clancy-Cullen Movers have been transporting approximately 10,000 books a day to the new shelves, which are compressed on moveable tracks.

“This type of shelving gets a lot of volume into a lot less space,” she said.

In an effort to conserve, the university had its existing metal shelves taken off and put in the moveable frames, she said.

Once the books are moved, the Quinn Library will get a mini-facelift: new carpeting, new paint, new lighting and a re-configuring of the reading and study areas.

And quiet, of course.