skip to main content
Return to Fordham University
You are at:Home»Colleges and Schools»Fordham College at Lincoln Center»Blending Fordham and the Bronx
Students interviewed local leaders and neighbors in Belmont to reimagine the area next to Fordham’s Bronx campus.
The area just south of Fordham’s Rose Hill campus gates, bound by Fordham Road, East 191st Street, Bathgate Avenue, and Southern Boulevard, is an odd mix of car repair shops, residences, and, of course, Pugsley Pizza. In 2013, the city rezoned the area to tilt the balance away from automotive services and toward more pedestrian-friendly retail and residential uses. 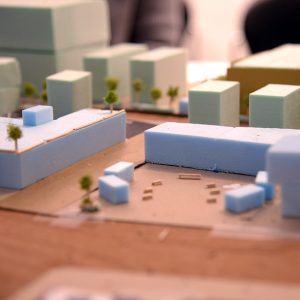 Students proposed a plaza with food trucks to replace a gas station behind Pugsley Pizza.

Cathcart, an associate professor of architecture, charged his students to dream up mixed uses for the neighborhood at the doorstep of Fordham’s Bronx campus. Students were assigned streets, and as part of their research they spent dozens of hours observing the daily life in their areas.

They also interviewed students from the nearby Theodore Roosevelt High School. They talked to John Sanchez and S. W. Mejia, the district manager and the chair of the land use committee for Community Board 6, respectively, as well as officials from the Bronx Office of the NYC Department of City Planning.

What emerged was a variety of views on how to “bring more eyes onto the street” and more mixed use to the area. The ideas were designed to give voice to concerns of nearby residents as well as Fordham students, said those who presented their findings on Dec. 13.

“We all see this area as a transition space between Fordham and the greater Belmont community,” said Gabelli School of Business senior Corrine Logan. “One of the things we thought was important, in addition to housing and cultural transition spaces, was to have academic transition space where Fordham students and local high school students can work together.”

Ultimately, the students saw the potential for a greater role for the University within the surrounding community. Among their suggestions were:

—  creating labs for peer-to-peer educational opportunities that could build on preexisting programs and partnerships, such as the Project True partnership with the Wildlife Conservation Society, and the idea of opening membership to the community in the University’s St. Rose’s CSA food cooperative.

—  increasing intellectual opportunities in off-site University-owned properties in the area for the surrounding Bronx community.

Consistently, the student’s final plans suggested a more open campus along 191st Street. Celina McCall, a junior at Fordham College at Rose Hill, argued that more gate openings near the 191st Street corridor would increase foot traffic from Fordham Road and thus lead to greater safety along the street. She and her design partner Sean Kraemer, a freshman in the School for Professional and Continuing Studies, proposed zoning the street for small businesses and affordable housing with a certain percentage set aside for long-term Bronx residents.

“Even though we live in the same community we don’t interact with each other enough,” said McCall. “We can address that aesthetically as well as practically, by marrying what Fordham looks like inside and the Bronx looks like outside.”

Cathcart plans to present the findings to the community board and planning representatives next semester.

Cathcart examines the model of an imagined Lincoln Center campus. The model was created earlier this semester by students in his Designing the City class.