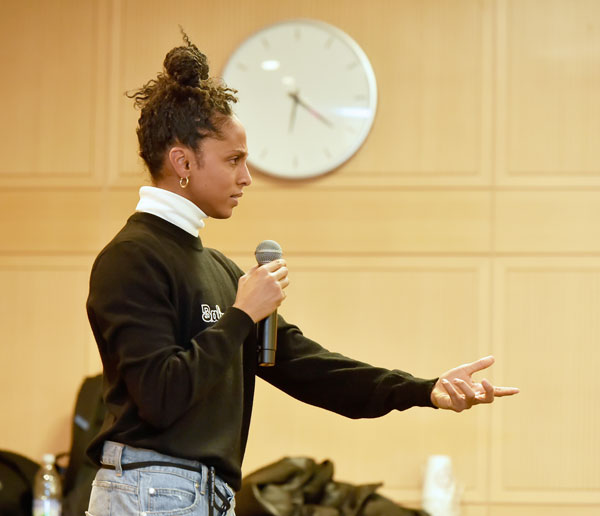 Khan, who goes by the pronouns they, their, and them, began their Jan. 23 talk by telling a travel story that illustrates how embedded racism and bias can impact day-to-day interactions.

“I am late for a connecting flight, and I’m rushing through the airport and I get there and I just happen to be in first [class]this time,” Khan, who is now based in Los Angeles, said to a standing-room-only crowd of students, faculty, and community members in a Fordham Law lecture room. The event was part of Fordham’s week of programming in honor of Dr. Martin Luther King Jr.

“And right above my head the overhead space is full. So I look behind and there’s one, there’s an empty space, and I’m late enough where everyone is settled in. And as I’m about to, in a very practiced way, swing my bag up there, an older man pops up and he goes, ‘Uh, I’m sorry, ’scuse me, do you belong here?'”

Khan said that they paused for a few seconds and stared back at the man who they said didn’t have “a malicious bone” in his body.

“You know it’s funny … I’ve read all the books, I’ve had all the conversations, I’ve been on the frontlines … I have had all the debates that you could possibly imagine, and still there’s never a way to respond to these things,” Khan said. “There’s no set way to know how to unpack this exchange that’s happening between us in 10, 15, 30 seconds, and so I just stare at him.”

Janaya Khan talks to students after her lecture.

Khan said that they saw something happen on the man’s face and he quickly apologized, lifted the carry-on onto the rack, and retrieved it after the plane landed.

“I tell this story because the word ‘belonging’ is something that keeps coming up for me and in this work,” they said.

Khan was the keynote speaker for Dr. Martin Luther King Jr. week, which aimed to honor King’s legacy and explore the impact of his work—and that of the civil rights movement—on today’s civil and human rights agenda.

They said that they told the story from the plane because it embodies their work on pushing for equality and justice for people of color, those who are LGBTQ+, those who some consider “outsiders.”

“It was in that moment that so many other things make sense—a black kid selling lemonade on the corner who gets the police called on them, a black man walking down the street who has the police called on him, a cookout with a group of black people and they have the police called on them,” they said. “We come up with these amazing memes and they’re so funny—BBQ Becky and all that—but ultimately there is a reason why these people feel like they need to regulate space. When you are taught to believe that you have more ownership of a space, of a society, of a country, of an institution, whatever it is, then it becomes your job to keep those who don’t belong out.”

Khan called on those in the audience to actively seek to build bridges to others who are different, as a way to combat supremacy.

“If you don’t seek me out, and I don’t seek you, we have accepted the terms of white supremacy in this country,” they said. “We have accepted its conditions. We have accepted its parameters. When you decide that my life is of lesser value than yours, when we do not take personally the things that are happening to the populations of other people, understanding that if they’re coming for me tonight, they most assuredly will be coming for you tomorrow morning, if we aren’t beginning to take these things personally, we aren’t going to win.”

The office of Rafael Zapata, Fordham’s chief diversity officer, sponsored the lecture and the rest of the week’s Dr. Martin Luther King Jr. events. Zapata said that Khan “embodied this spirit” of King, which included pushing back on “norms” that are wrong and fighting for social justice and equality.

“When the movement went from the Deep South, and the unambiguous repudiation of racist acts and hatred, to systemic racism in the North and segregation, he lost many friends and I think that courage and that evolution is lost,” he said.

Zapata said that activists like Khan have helped to keep the movement alive and the work ongoing. “When I read some of the writings of Janaya Khan, I think of Black Lives Matter in that longer trajectory of slave rebellions, of abolitionist movements, of post-reconstruction communities, of literary movements—W.E.B. DuBois, Ella Baker, Audre Lorde, and so many nameless others—and we’re thankful that they’re here today.” 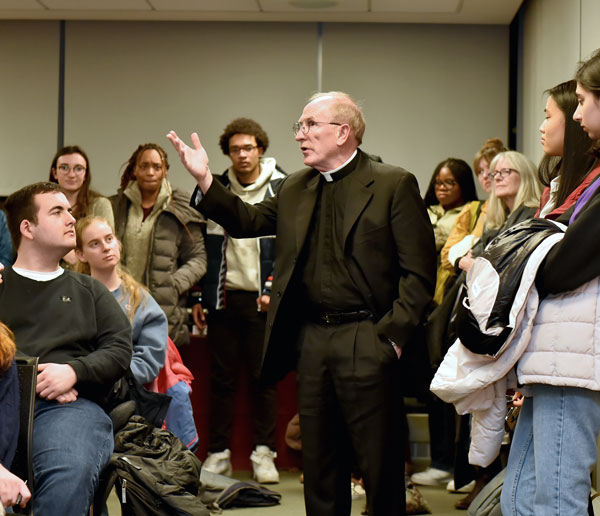 Joseph M. McShane, S.J., president of Fordham, said that Khan’s speech, which also included a call for economic justice, as well as social justice, encouraged those in attendance to examine their own selves and work for change they want to see in the world.

“It’s an invitation rather than a lecture,” Father McShane said. “You took us through one of the difficult conversations, which is a necessary conversation, and it’s necessary because it’s a prophetic conversation and you did it in a masterful way. I can’t tell you how moved I was by what you did.”