Gilmore, the director of the Center for Place, Culture and Politics, and professor of geography at City University of New York’s Graduate Center, honored the 50th anniversary of the Fordham’s Department of African and African American Studies with “Meanwhile: Making Abolition Geography Happen,” 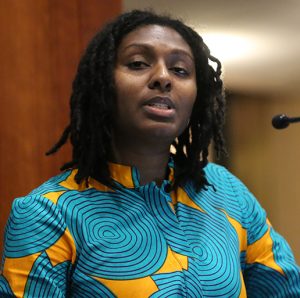 She focused primarily on how the anti-prison movement spans diverse communities, boundaries, and resources, all in the service of shutting down a prison industrial complex that disproportionately affects men of color.

Gilmore recalled the morning of Jan. 17, 1969 at UCLA, when students gathered to discuss what a black studies program should look like. The event was spurred after Chicano and Mexican-American students walked out of classes at UCLA, demanding a curriculum that took their existence into account. After the meeting, two African-American students, Alprentice “Bunchy” Carter and John Huggins, both members of the Black Panther Party, were gunned down in a stairwell outside the meeting room.

“This person was my cousin, my mother is his mother’s sister,” Gilmore said of Huggins. “My life changed the day he died. I was raised in an activist family. He set me on the course that brings me to the front of this room tonight.”

That event stands in stark contrast to the comparatively peaceful takeover of the dean of student affairs’ office at Fordham in 1968 by African-American students and their allies, which The New York Times called “quick and orderly.” Soon after, the administration responded to student demands by creating what would become the African and African American History Department, one of the first in the nation

In contrast, Gilmore described a “slaughter” of students lobbying for black studies at UCLA. While the case has never been definitively resolved and many blame another faction of the Black Panther party, Gilmore said it was “an attack that was set up by the counterintelligence program of the FBI, in association with the Los Angeles Police Department.”

“They were fighting over what the content and the purpose of what was then called a black studies curriculum should be,” she said.

“They brought their collective consciousness of being part of the [Black Panthers] … to what is to be learned, who should teach, who learns what, and to what end.”

She said that two generations later, many of the issues discussed that day, such as the demand for “education not incarceration,” continue to resonate. And even though a place like Fordham never experienced violence on the same level as UCLA, she said students are influenced by the black radical tradition expressed by Carter and Huggins.

In explaining how abolition geography can be used to thwart prison building, Gilmore said that any movement, including education or prison reform, must both continue in that tradition, and also move beyond local coalitions and take a regional approach.

She cited as an example a 1998 proposal for a new prison in Delano, California. The prison, which was proposed by then-Governor Gray Davis, was a none too subtle gift to a local prison guard union that had donated $1 million to Davis’ latest election campaign. In order to defeat the proposal for the “mega prison,” that would house up to 6,000 people, Gilmore said “multigenerational organizers turned their accumulated experience across a wide variety of local, national, and international campaigns to the task getting advice and contacts” to stop the Delano prison.

“They brought strategies and histories from anti-apartheid, black power, agricultural boycotts, university anti-racism, and sexism campaigns, to bear on how they approached people in faith communities, workers’ centers, and hiring halls, social justice, and environmentalist groups, schools and colleges, municipalities, and development agencies, and of course unions,” she said.

Abolitionist geography works, she said, by spanning not only the physical geography and location of a particular cause. It encompasses all the people who inhabit that space, be they black or white, farmers or farm workers, factory owners, and unions.