skip to main content
Return to Fordham University
You are at:Home»Colleges and Schools»Fordham College at Lincoln Center»Bird Migration Study Gets Midtown Perch

A Canada goose keeps the nest warm as another stands guard. (Photos by Tom Stoelker)

At 292,000 square feet, the Jacob Javits Center’s green roof is the second largest in the nation. The center is also bird-friendly; tiny ceramic dots cover the windows, to make them visible to the birds and prevent collisions. From above, the building is an island of green where there once was no green space at all.

On the roof one can immediately see how the birds have taken to the space, as dozens of seagulls hover. A few of the gulls have begun to lay eggs in the roof’s sedum succulents, as have Canada geese and even small falcons have begun using the roof for hunting. Surveying the scene, J. Alan Clark, PhD, associate professor of biology and coordinator of Fordham’s conservation biology program, gestured to the city’s skyline. 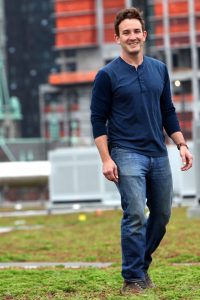 “Most birds migrate at night and are negatively impacted by the light and noise. You can’t do too much about noise in cities but if we can do something about lighting, that might be a way to make the skies much safer for migrating birds.”

As the New York City Council contemplates an energy-saving bill to reduce lighting used in buildings around town, Clark wants to research how those lights affect bird migration patterns.

Clark began studying the patterns more than seven years ago in locations that ranged from Central Park to the Bronx Zoo to a nature reserve in Westchester. Through radar and acoustical recording, Clark’s study tracked how birds navigate through urban landscapes vs. green spaces.

Clark is one of several New York City area researchers that are using the roof for research. Completed two years ago, the green roof is relatively new. Yet birds and their food source, arthropods, are already settling in, he said, and are using the space as an oasis in the densely populated region.

When Clark first came to Fordham in 2007, there was very little data on how birds navigate through urban landscapes. Clark began researching their movements in 2009, using recording devices to listen to the birds—which make very species-specific calls during migration to maintain group cohesion. He noticed that birdcalls were three to twelve times higher over urban areas than over nearby green spaces.

Clark said that migrating birds are attracted to artificial light. Communication towers and lighthouses have always been well-known “death spots.”

“During migration birds are attracted to lit structures where they’ll hit the wires, hit the buildings, hit each other, or fly in circles and drop from exhaustion,” said Clark.

This will be the fifth time Clark has studied the effects of light on migration. In 2012, Clark worked with light sculptor Rafael Lozano-Hemmer at a light installation in Philadelphia where the artist regulated color, brightness, and direction of the lights while Clark monitored bird behavior. This time, the migration study would be taking take place over one of the densest urban environments in the world. 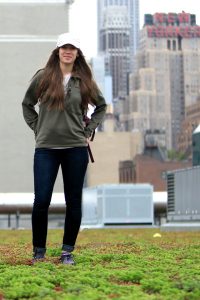 Earlier studies led Clark to speculate that brighter urban areas are more stressful for migrating birds. Using a DeTect avian radar tracking system synched with acoustical recordings, his team determined that the same density of birds were migrating over both urban and green areas “but they were calling more and flying higher over urban areas,” he said.

The Philadelphia research further revealed that the color of the light also made a difference. Red light proved the most attractive to the birds, while blue and green were less so. But when the light was intense and white 75 percent flew in circles or in the wrong direction.

“They were supposed to migrate south, but the white light made them go north or circle in the light,” he said. “The reverse was true in blue and green light.”

Clark’s next step is finding funding to move from pilot level studies to a much larger scale experiment built on the earlier research. DeTect is working on a radar design, the parts of which can fit into the center’s elevators and then be assembled on the roof. Clark said that the Javits management has been an exemplary and willing partner, opening the rooftop to biologists from Fordham and New York City Audubon to study birds, as well as bats and bugs.