skip to main content
Return to Fordham University
You are at:Home»University News»At Memorial Mass, Recollections of Former Fordham President Joseph A. O’Hare, S.J.
Photos by Dana Maxson
Called together by the blare of bagpipes on a sun-soaked Saturday morning, more than 150 people congregated at the University Church on Sept. 25 for a memorial Mass in honor of Joseph A. O’Hare, S.J., the influential former Fordham president who died last March at the age of 89.

Long postponed due to the COVID-19 pandemic, the Mass was concelebrated by 15 Jesuit priests, including current Fordham president Joseph M. McShane, S.J., and Joseph M. O’Keefe, S.J., provincial of the Jesuits’ USA East Province. It marked the first public remembrance of the University’s longtime leader, whose multitudinous achievements included the construction of the William D. Walsh Family Library and the building of the first student residence hall at the Lincoln Center campus. 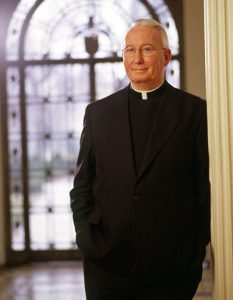 “Joseph Aloysius O’Hare was a leader not only at Fordham University for 19 years, but also for other Catholic and Jesuit universities as well as for his native place, the City of New York,” said homilist Patrick J. Ryan, S.J., the Laurence J. McGinley Professor of Religion and Society.

Tracing the life and august academic career of Father O’Hare from his time as a student at Regis High School in Manhattan through his nearly two-decade-long administration of the Northeast’s oldest Catholic university, Father Ryan, who first met Father O’Hare in 1962 at a now-closed seminary in Shrub Oak, New York, provided personal recollections of a visionary pastor with patrician sensibilities and a wry, irreverent wit.

“He was never a ‘king of the Gypsies,’ but he could dance very well without stepping on women’s feet, a virtuoso technique I never mastered,” said Father Ryan. “Joe danced so well that he took a future Rockette to his Regis senior prom.”

From 1975 until 1984, when he assumed the presidency at Fordham, Father O’Hare served as editor-in-chief and frequent columnist at America magazine, a New York-based Jesuit publication focused on politics, faith, and culture. As president of Fordham, he led multiple building projects, including the creation of four new residence halls; helped to triple the number of undergraduate applicants; helped grow the University endowment from $36.5 million to $271.6 million, and launched a successful $150 million fundraising campaign.

“Though he was undeniably proud of the many ways Fordham flourished publicly during those years, he was also privately gratified by his work with faculty, staff, and students to live out the principles of peace, justice, and respect for all people,” said Gregory Scesney, a nephew of Father O’Hare, during the eulogy.

Father Ryan called Father O’Hare the “University’s consoler-in-chief” during times of crisis. As Fordham’s president, he shepherded its community through difficult periods of shock and mourning, including the sudden death of undergraduate football player Bill Tierney in 1996 and the terrorist attacks of September 11, 2001.

“The presidency of Fordham is not just a type of corporate leadership. The president of Fordham holds the shepherd’s crook to guide the flock into green pastures beside restful waters,” he said.

Father O’Hare’s influence extended beyond the verdant fields of Fordham and into New York political life during his tenure as founding chairman of the city’s Campaign Finance Reform Board, which he led for 15 years under mayors Edward I. Koch and Rudolph W. Giuliani. A member of numerous civic organizations, he facilitated the board’s first public funds payment in 1989 and caught the ire of Mayor David N. Dinkins when the board fined his campaign $320,000 for illegal overspending.

“Joe O’Hare was simply the most famous Jesuit in the capital of the world, a man who could tame wild beasts and mayors with the flick of a pen,” said Father Ryan in his homily, noting that New York politics maintained “a reputation for financial skulduggery, especially in mayoralty campaigns.”

For his moral leadership, Father O’Hare won the friendship and lasting respect of his colleagues at the Campaign Finance Board, including current Associate Justice of the Supreme Court Sonia Sotomayor, who called him “one of my heroes” at the time of his death. Several of those colleagues were in attendance.

Scesney said the family “learned early on that Uncle Joe was a man who listened to all sides and spoke from an educated position.”

Born into an Irish American family in the Bronx during the early years of the Great Depression, Father O’Hare entered the Society of Jesus in 1948 and was ordained at the Fordham University Church in 1961. The son of a New York City mounted police officer and a public school teacher, O’Hare spent time as a Jesuit scholastic in the Philippines, where he later taught at the Jesuit-established Ateneo de Manila University and met influential political figures ranging from Benigno S. Aquino Jr. to Imelda Marcos. (As head of Fordham, he awarded Philippine President Corazon Aquino an honorary doctorate in 1986.)

At the conclusion of the Mass, Father McShane encouraged congregants to honor the memory of Father O’Hare in a way he would approve: Not with mourning and tears, but with stories and laughter.