skip to main content
Return to Fordham University
You are at:Home»University News»At Arts and Sciences Faculty Day, A Celebration of Scholarship

In 16 years at Fordham, James T. Fisher, Ph.D., mined the sands of time to tell countless stories of American Catholics, in publications such as On the Irish Waterfront: The Crusader, the Movie, and the Soul of the Port of New York (Cornell University Press, 2009).

On Feb. 2, Fisher, a professor of theology, used his final address to his colleagues to tell his own families’ story.

“I was determined not to do one of those ‘My family is crazier than your family’ kind of histories, because I wouldn’t know how crazy anybody else’s family is,” said Fisher, who is retiring in May to spend more time in California with his son Charlie, who is autistic.

“But the complementarity of [mine and Charlie’s]cognitive systems is such a positive thing, I started to get much more positive feelings about my own family’s history. I wondered about people who may help me understand who we are.” 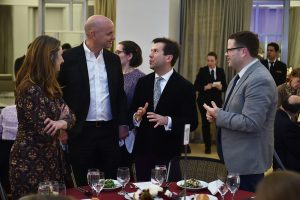 He discovered, among other things, that his great grandfather moved from Brooklyn to Panama in 1906 to work as a plumber on the Panama Canal. There, he became Chief and Senior Sagamore of the fraternal organization the Improved Order of Redmen.

“They wanted to transplant all the putative virtues of white American Christian Republicanism to this utopian community on the Isthmus of Panama. The Improved Order of Redmen was one of these kinds of organizations,” Fisher said, noting dryly that membership was not, in fact, open to Native Americans.

“I had to readjust the longevity of my father’s side of the families’ devotion to the Roman Catholic Church. I’d been off by 12 to 15 centuries. My great grandfather was nobody’s idea of a Roman Catholic. He was in fact, a pagan.”

He died under mysterious circumstances, and Fisher’s great grandmother moved back to Brooklyn, where Fisher discovered she lived in Vinegar Hill, next door to William Sutton, the infamous bank robber who was credited with saying he did it, “Because that’s where the money is.” 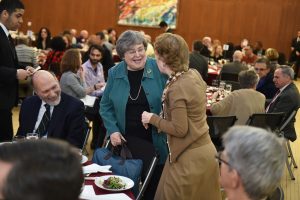 “My father’s family presented itself as the ultimate exemplar of just that model, but empirically it was not true. They lived where the work was; they lived on the waterfront in Brooklyn, Manhattan and North Jersey,” he said.

And although his grandparents experienced the terror of a resurgent of the Ku Klux Klan in the 1920’s, they did just fine in the end.

“They were homeless in the 1930’s. By 1946, because of the war, my grandfather worked up in his job, and sent their sons to the University of Notre Dame—the eighth wonder of the world for American Catholics,” he said.

Fisher’s talk was part of Arts and Sciences Faculty Day. This year, honorees included
Christopher Aubin, Ph.D., associate professor of physics, who was honored for excellence in teaching in science and math;

Jim Fisher, Ph.D.,professor of theology, who was honored for or excellence in teaching in arts and humanities

Maryann Kowaleski, P.h.D., Joseph Fitzpatrick SJ Distinguished Professor of History and Medieval Studies, who was honored for excellence in teaching in graduate studies.

The evening also celebrates 12 members of the arts and science faculty who have been chosen to work together to discuss innovative teaching techniques. The group, which includes graduate students and cuts across campuses and disciplines, meets five times a semester for two semesters to share recent scholarship in the field of teaching stories, and techniques. This year’s cohort includes: 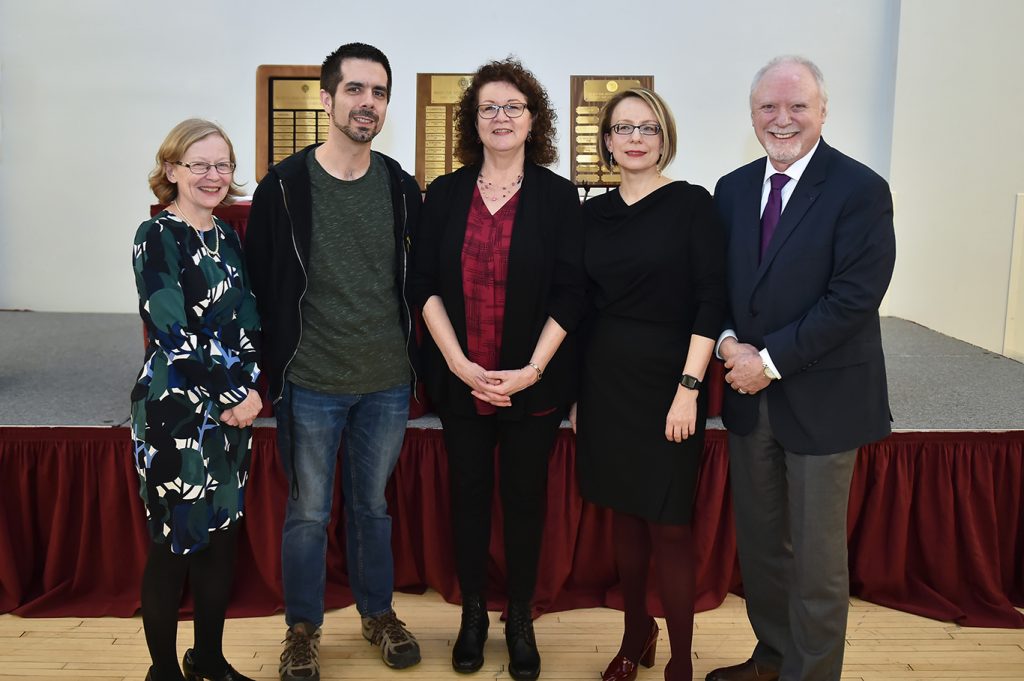