skip to main content
Return to Fordham University
You are at:Home»Arts and Culture»Arts and Sciences Faculty Day: Wrestling with an Unknown Icon
Lecture photos by Tom Stoelker, Event photos by Dana Maxson
In celebration of Arts and Sciences Faculty Day 2020, Amy Aronson, Ph.D., associate professor of communication and media studies, kicked off an evening of cocktails, conversation, and commemoration with her talk, “In Search of Crystal Eastman,” a culmination of several years of research for her recently published book, Crystal Eastman: A Revolutionary Life (Oxford University Press, 2019). 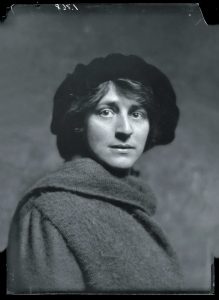 Eastman was a central figure committed to a wide variety of causes, which proved problematic for forging a clean heroic narrative, said Aronson. Eastman co-founded the National Woman’s Party and the Women’s Peace Party, an antiwar group, and in 1917 she engineered the founding of the National Civil Liberties Bureau, which eventually became the American Civil Liberties Union (ACLU). She co-published the socialist magazine The Liberator with her brother Max Eastman and is credited with co-authoring the Equal Rights Amendment (ERA). Yet, her story was largely lost to history because her interests and causes remained so diverse.

“I think her problem involves more than sexism, although that’s certainly part of it. I believe it was Eastman’s intersectionality—her multiple movement identifications—that destabilized her image and her status,” said Aronson. “It complicated her connection to what scholars identify as the mainstays on which historical recognition and remembrance are built.”

Aronson said that Eastman envisioned herself as “one of those circus chariot ladies” with one hand “driving a tandem of the arts and the law,” and “the other hand holding aloft two streaming banners—love and liberty.”

“Although some of her politics were compatible with other progressive activists at the time, most activists eventually evolved and prioritized and chose one major organization to be affiliated with. Eastman never did,” said Aronson.

“The challenge with a complicated narrative is to try to find a way to create some coherence out of it. As scholars, we have to become more conscious of that rather than take the easy ‘role model’ narrative, leaving out the challenging voice, rather than embracing it.”

But Eastman’s forward-thinking philosophy proved hard for Aronson to resist. For example, Eastman refused alimony after divorcing her first husband for infidelity in 1916, saying “no self-respecting feminist would accept alimony—it is a relic of the past.” By her second marriage, she had taken on feminist dilemmas in family life.

In an unpublished manuscript written sometime after 1917, she proposed a newspaper column about the silenced longing of married mothers for substantive work outside the home, a yearning that anticipates Betty Friedan’s “problem that has no name”—nearly half a century before the breakthrough of The Feminine Mystique in 1963.

“And I want to emphasize that this was a woman born before the invention of the fly swatter, the zipper, the ice cream scoop,” Aronson said.

Musicians at the reception

As faculty day kicked off, Aronson and her husband Michael Kimmel, Ph.D., mingled with fellow faculty. She spoke of her book launch held last month in a Tribeca loft. There, more than 20 members of Eastman’s family showed up, many of whom Aronson interviewed for the book. Several of them had never met and others hadn’t seen each other in years. After the event, family members continued to socialize and celebrate their ancestor at another locale.

The anecdote provided a glimpse into Aronson’s research methods that include a penchant for interviewing primary sources. It’s a method fostered by her journalist background, yet steeped in academic rigor. More than a quarter of the book is filled with footnotes, which she described as “fragments and whispers of her from disparate sources.”

“My hope is for someone else to take up the research and get Eastman back into the conversations,” she said. “I want to see someone pick it up where I left off and make it better. This is a foundation to enter the story.”