skip to main content
Return to Fordham University
You are at:Home»Colleges and Schools»Fordham College at Lincoln Center»Ars Nova: Shifting Perspectives Through Research
Above: Mary Cleary’s graphic novel imagines a world without weapons. Photos by Tom Stoelker
This year’s Ars Nova showcase, which highlighted undergraduate research from Fordham College at Lincoln Center on April 12, featured work from a variety of disciplines. Many students examined themes familiar to them and to their audience, yet pivoted the perspective to present the subjects in a new light.

A Graphic Novel Delves into A World Without Weapons

In senior Mary Cleary’s first year at Fordham, children of Sandy Hook Elementary School were shot and killed. In her senior year, high schoolers in Parkland, Florida, were gunned down. In the years in between, she said, she began to contemplate what a world without weapons would look like. As a new media and digital design major, she began to think about expressing her thoughts in a graphic novel titled Nath for its lead character.

In Cleary’s imagined world with no weapons, Nath is a college athlete in a street gang. But the author pointed out that just because there are no knives or guns, that doesn’t necessarily mean it was a world without violence.

“I was curious how people may adapt to something like that, so I settled on hand-to-hand combat,” she said. “In Nath’s world there’s a lot of emphasis on honor in fighting, and I thought about how in martial arts they focus on protection and not on harming others.”

Set in an urban landscape that combines the density of 20th-century New York with the sprawl of modern Tokyo, Cleary’s novel wrestles with many contemporary issues, such as the need for weapons in the first place. Nath’s cousin tells her that hand-to-hand combat isn’t always fair, that sometimes a stronger person will attack a weaker person.

“So, he proposes weapons do have a purpose and they can be used with an honorable purpose, which is protecting your own life,” she said. It’s a concept that Nash, however, resists.

Her novel, which she hopes to “shop around” after graduation, is part of an ongoing series with Nath continuing to wrestle with issues that are far more American than Japanese.

A Humanist Interpretation of the Conquest of Mexico 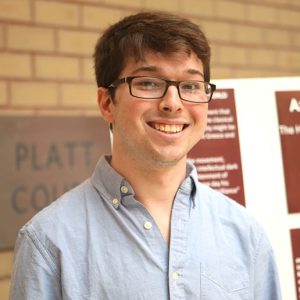 Junior Joshua Anthony examined the humanist interpretation of the Spanish conquest of Mexico. He noted that 16th-century scholars from Europe viewed the experiences of the Aztecs through the lens of ancient Greece and Rome.

“They used [their]Renaissance ideas about clashes and conflicts with different cultures as a way to read history,” he said.

He said today there are a variety of methods to examine a particular culture.

“I like to look at narratives and how people think of things,” he said. “My favorite historians of this period can read the Aztec language, look at their writings, and contextualize those.”

He noted that Aztecs were far from a homogeneous culture, but instead represented a variety of cultures and languages, not unlike Europeans.

“Studying the Aztecs showed me how many different sides of the story there are,” he said. “That’s crucial to understanding history and not getting bogged down by your preconceived beliefs.”

The Compatibility of Islam with French Values 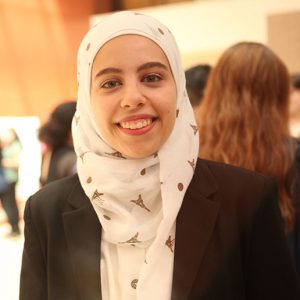 As a native of Egypt, senior Mariam Moustafa brought an outsider’s perspective to the issue of Muslims living in France. Her research examined the compatibility of Islam with the values of the French Republic. She began by looking at Muslim-French relations starting with the seventh century and the establishment of the French state and continued on to 1962 and the Algerian War of Independence.

She noted that 18th-century agreements between the church and the French Republic led to modern-day values that separated the church from the state. She said that sometimes the ideals associated with secularization can be radicalized in much the same way the ideals of Islam can be.

“The state should be neutral and not represent any religion, but it gives the right to practice religion,” she said. “But some say, ‘No you can’t practice religion outside the house and once you go out onto the street, take off your [hijab]scarf.’”

Moustafa hopes to move to Paris after graduation and work as an interpreter of language and of culture.

“If we can get the French to understand that different cultures can become compatible, then I want to be a part of that,” she said.

Reimagining Shakespeare and the Dark Lady 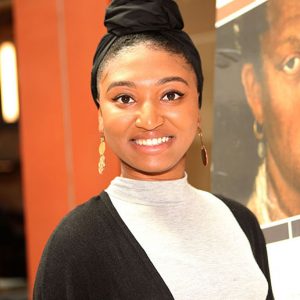 Junior Rachel Jarvis wrote a screenplay that turns notions of Shakespeare’s plays on their head. Riffing on a Virginia Woolf’s essay, “A Room of One’s Own,” which imagined that Shakespeare’s sister had his talent but not his male privilege, Jarvis imagines that Shakespeare’s “Dark Lady” wrote his plays instead.

The identity of Shakespeare’s Dark Lady has been a mystery for centuries. The subject of several Shakespeare sonnets, some say she ran a brothel in the Clerkenwell section of London, where Fordham’s new London Centre is undergoing renovations. She has alternately been referred to as Black Luce or Lucy Negro. Jarvis’s screenplay is called “Lady Lucy.”

Toxicity of Weed Killer on the Horseshoe Crabs in Jamaica Bay 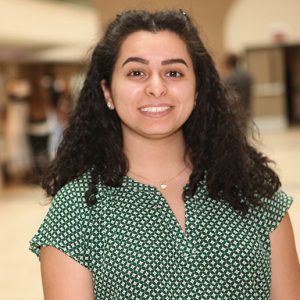 Senior Karin Khoder grew up in Brooklyn near Jamaica Bay, an area that she drove by without paying much attention. But her research, which examines the toxicity of a weed killer on the area’s horseshoe crabs, has made her see her neighborhood in a different light.

Monsanto, the agriculture giant, manufactures the weedkiller Roundup. Khoder said the company touts the weed killer’s non-toxic qualities. Indeed, she tested reactions of horseshoe crab larva when in contact with Roundup’s active ingredient, glyphosate, and found it to be relatively harmless. But the inactive ingredient, a detergent called decylamine, caused the larva to become an opaque white color, rather than the greenish-brown they should be. Unfortunately, Monsanto doesn’t make the exact formula available to public, so Khoder does not know the amount of decylamine used.

“I think that corporations should be more transparent in what they’re doing because the only way we can make things safe is to be able to do scientific research,” said. Khoder.

As a Brooklynite, her view of the area has been transformed through her work.

“I never had the opportunity to go to the beach and explore all the wildlife,” she said.

She said the there used to be a landfill nearby and the water came right up to the highway. After the beach was restored, nature returned. “Now, we see all these different horseshoe crabs, snails, and fish.”

Dancing to Your Own Tune

Junior Isabel Mallon’s video series “Talking Bodies” allows dancers to improvise. “As dancers, sometimes we get less of a say,” she said. “When you’re in the room with a choreographer, they have the power.”  Rather than direct their movements, Mallon allows her subjects the freedom express themselves. In voiceovers, the subjects discuss body image, self image, and “how they feel about themselves.”