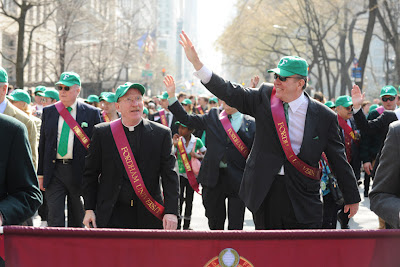 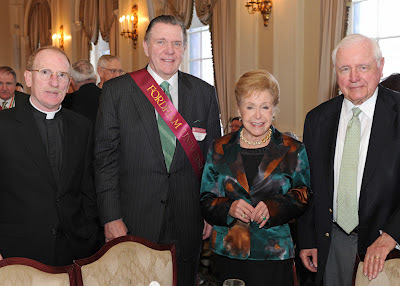 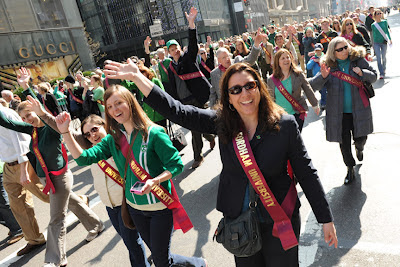 Fordham Alumni, students and friends, 1100 strong, filled two city blocks during Saturday’s St. Patrick’s Day parade on Fifth Avenue. It was the largest Fordham contingent that ever turned out to march, and the day was accommodating, with temperatures in the sixties and clear, sunny skies. 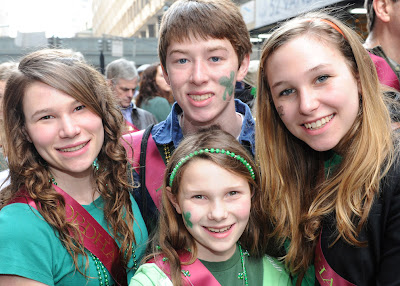 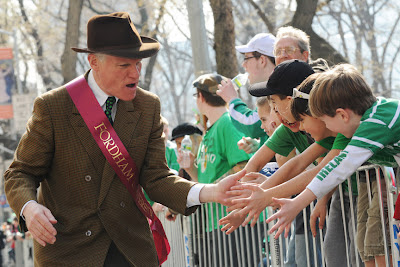 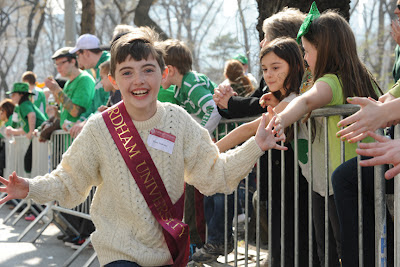 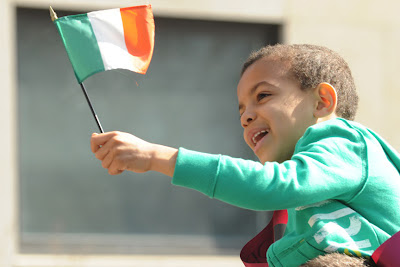 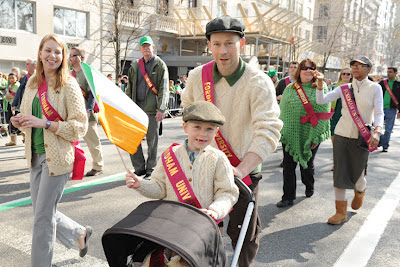 Revelers packed the streets on the morning of St. Patrick’s Day, their green-clad bodies rushing down 42nd Street like a raging emerald sea. It was quite a different scene on the 20th floor of the Yale Club, where Fordham hosted a more intimate pre-parade celebration.

But what the annual St. Patrick’s Day brunch lacked in noise and crowds, it made up for in spirit.

“Fordham has such a great Irish tradition and heritage. I’m so proud to be a part of it on St. Patrick’s Day,” said Sheila Fitzpatrick, LAW ’05, who was president of the Irish Students Association at Fordham Law. She brought her parents from Bay Ridge, and her husband, decked out in a fisherman’s sweater.

The Fitzpatricks and roughly 300 other guests joined speakers Gen. John (Jack) Keane, GSB ’66, former vice chief of staff of the U.S. Army, and bestselling suspense novelist Mary Higgins Clark, FCLC ’79, for the festivities before the parade, which was marched this year in honor of veterans of all wars.

Keane’s first order of business: To welcome the 30 or so Fordham student veterans in attendance, whose $50 brunch tickets were covered by alumni veterans of the University. The retired four-star general shared with guests what he came to learn about veterans in his 37-year military career.

“They are not about war; they are about selfless service,” he said.

“In my judgment, they do it for a simple yet profound sense of duty and they do it for one another,” he said. “We can never take that for granted and we at Fordham never will.”

Higgins Clark told the crowd that she used to gaze at the Rose Hill campus from her childhood home on Pelham Parkway. Wanting to set a good example for her five children after their father died, she took night classes at Fordham for “five great years.”

“My DNA is consistent with shamrocks,” said the wildly popular author. Of the three leaves, she said: “One is for Ireland; one is for Fordham University, and the third one will lead to God.”

Reflecting on the Yale Club setting, Joseph M. McShane, S.J., recalled a series of posters Fordham recreated in 2007 to celebrate 125 years of Fordham football. One depicted the 1949 Yale-Fordham game, which he recently found out was never played due to an outbreak of polio at Yale.

Fordham football players collected money to help the afflicted Yale students cover their medical expenses, delivering it to Yale’s president on what would have been game day.

Father McShane spoke of his deep “admiration for our students,” who, at that time, often came from the working-class apartment houses of the boroughs and yet, “collected money for the well-heeled students at Yale.”

After jumping to their feet to sing Fordham’s fight song, “The Ram,” guests joined hundreds of other Fordham parade marchers under big maroon and white balloons on 45th Street.

Michael Graham, GSB ’92, proudly showed off his niece and nephew, toddlers Madeline and Ryan, their faces adorned with shamrock stickers. He and his brother-in-law, Brendan Reynolds, GSB ’95, marched with their alma mater “because of the great Catholic education at Fordham,” he said.

Retired Col. Edward Winkler, FCRH ’67 and LAW ’72, served as one of Fordham’s banner bearers. “I’ve been very proud of Fordham all through my career,” he said. “It’s a great school, great people, and a great legacy.”

The event was coordinated by the Office of Alumni Relations. Click here to view more photos from the parade and brunch.