skip to main content
Return to Fordham University
You are at:Home»University News»Homecoming Brings Out Fordham Faithful
Slideshow photos by Chris Taggart. Video by Tom Stoelker and Dianna Ekins
The temperature flirted with freezing, but nothing could extinguish the warm and joyous spirit at the Rose Hill campus on Saturday, Nov. 16, as Fordham hosted its annual Homecoming celebration.

The day began with 75 hardy souls taking part in the annual Ram Run, which sent runners on a 5K loop around the campus.

While they passed beneath the boughs of stately elm trees lining the campus, other revelers passed beneath the arches of Rose Hill’s Southern Boulevard entrance, heading to the parking lot where they set up for tailgate parties. The lot drew fans of both Fordham and the College of the Holy Cross, whose Crusaders ultimately won the Homecoming matchup 49 to 27.

Joe Jordan, GABELLI ’74, a Fordham Football Hall of Fame inductee who received the 2019 Mara Family Award, joined former teammate John Lumelleau, FCRH ’74 at the lot. Jordan was a freshman when football was reinstated as a Division I varsity program in 1970, after it was stopped in 1954 and revived as a club in the 1960s and then a Division III team in the NCAA.

“They brought back varsity on a shoestring, really,” said Lumelleau, who is also a member of the Fordham University Board of Trustees. Still, there was excitement on campus for the program, particularly a game their freshman year against Georgetown, soon after legendary coach Vince Lombardi, FCRH ’37, passed away.

“At halftime, they had the six surviving Seven Blocks of Granite,” Jordan recalled, citing the nickname given to Fordham’s fearsome linemen, including Lombardi. Wellington Mara “[current co-owner of the New York Giants]. was there, Marie Lombardi was there. There was no Lombardi Center—that’s when they dedicated it.”

The pair and many of their teammates still get together every year as a part of the “Rams of the ’70s” group that Lumelleau, a 2015 Walsh Family Award winner, helped start. 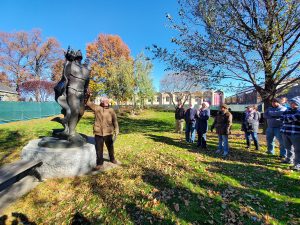 Reuniting Under the Big Tent

In the center of campus, beside the field where the Holy Cross Crusaders would face off with the Fordham Rams for the 57th time, several thousand alumni, students, families, and friends flocked to massive tents on Edwards Parade for burgers, pulled chicken, and libations. Several tables offered information about various alumni affinity groups, while the Fordham University Alumni Association (FUAA) collected four boxes of goods that attendees donated for POTS, a nonprofit that helps individuals facing poverty in the Bronx.

Outside the tent, Giant Jenga games lured guests on the west side of the parade, while face painting, a bouncy castle, wall climbing, and corn hole enticed families by the steps of Keating Hall.

Elsewhere on campus, members of the Mimes and Mummers Alumni Association celebrated their annual “Collins-coming” at Collins Auditorium, and former Fordham Law School Assistant Dean Robert J. Reilly, FCRH ’72, LAW ’75, guided a group of 30 on a walking tour of the campus titled Hidden in Plain Sight: Discover the Jesuit Presence at Rose Hill. Among the tidbits he shared was the fact that the statue of St. Ignatius of Loyola next to Hughes Hall was commissioned by Joseph M. McShane, S.J., president of Fordham, who requested that the founder of the Jesuits be depicted facing directly up at the heavens.

“If you Google St. Ignatius of Loyola, you will not find that except for one place. This is a very, very unusual statue,” he said. 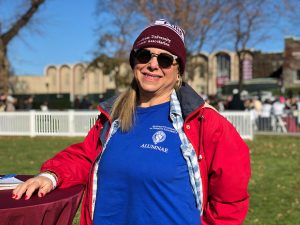 Seated at one of the blue tables in the tent reserved for Marymount College alumnae was Teresita Abay-Krueger, MC ’80, who studied biology and chemistry and went on to work at IBM. For several years, she served on the Marymount alumnae board.

“Fordham has been a very welcoming community to the Marymount alumnae … You’ve really been cheerleaders for [our]  legacy in many respects. And we not only appreciate it, but we respect that,” she said.

“It’s just been a natural melding of the two communities. And what better place to have it than Homecoming, where we get to celebrate a nice football game on a beautiful campus with plenty to eat and drink?”

A Bond Among Jesuit Schools

The event also drew families for whom loyalties between the Rams and the Crusaders were split. Bob and Rose Shea, natives of West Hartford, Connecticut, who graduated from the College of Holy Cross in 1985 and 1986, respectively, were sporting dark purple garb, while their daughter Fiona Shea, FCRH ’19, wore a hat that said simply, “Bronx.” Rose said they love the camaraderie between alumni of Jesuit schools. She’s also confessed to being obsessed with New York Botanical Garden, and noted that they became members during Fiona’s freshman year. Arthur Avenue is a must-stop for them every time they visit.

“Being from Connecticut, we’re more familiar with Boston, and of course we’re familiar with New York, but having Fiona here, it opened a whole new world to us,” she said. 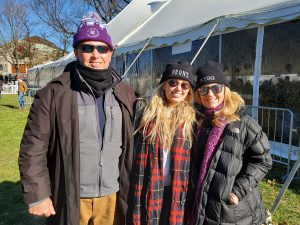 A Time for Families

Multiple generations of Rams took part in the day’s festivities. Lynn and Ryan Flaherty, both FCRH ’00, watched their children Nolan, 9, Reagan, 7, and Ainsley, 5, take their turns on the bouncy castles; they said there was never a question that they’d make the drive from Amityville, New York, for the day.

“We love bringing the kids here, and showing them where mom and dad went to school,” said Lynn. “They really do try to do something for the kids. Ryan’s parents join us, so we make it a big family thing.”

Jerry Breslin, FCRH ’59, likewise said he treasured the memories of his time on campus. He started returning after his son, John, graduated from Fordham College at Rose Hill in 1991. When he was an undergraduate, he said, he befriended the priest who was then the dean of men, and the priest officiated at Breslin’s wedding. Most of his former classmates had good friends who were Jesuits, he said. 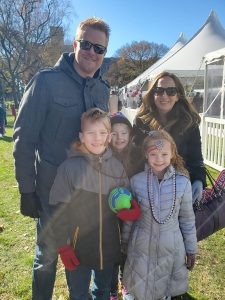 Lynn and Ryan Flaherty, both FCRH ’00, and their children, Nolan, Reagan, and Ainsley. Photo by Patrick Verel

“In the springtime, after dinner we’d come out and play softball. There’d be a hundred Jesuits standing around, watching the game. You’d make an error or something, and they’d yell, ‘Breslin, you’re just as bad at softball as you are in the classroom,’” he said, laughing.

Chris Healy, on the other hand, never graduated from Fordham, but nonetheless feels at home at Rose Hill. He’s been coming here since he was seven, when his father, Richard Healy, FCRH ’50 and uncle, Stan Bloomer, FCRH, ’50, brought him to his first homecoming.

“My family has such a history here,” said Healy, wearing a Fordham jacket more than three decades old. “To me, it’s tradition and history that embellishes this University.”

His daughter, Brittany Healy, GABELLI ’17, was celebrating in the main tent, too. Growing up, she and her two older brothers frequently watched football games at the Rose Hill campus. Years later, she majored in business administration and marketing at Fordham—just like her grandfather. 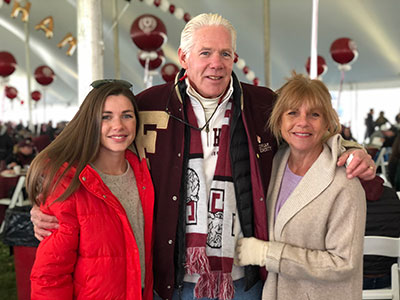 “My friends and I always talk about how Fordham is really like no other place on the planet,” said Healy, who is now an account executive at a public relations agency. “The community feel and the love that we have at this college is just different than anywhere else.”

“I love coming to homecoming. Whenever I get the chance to come back, I really enjoy it. And now that he’s in the program, it’s even more of a reason,” she said, motioning to her boyfriend, Matthew Glaser, a Ph.D. student in philosophy at Fordham.

“I haven’t even been to my undergraduate homecoming before, so this is a new experience for me,” said Glaser, who lives near Arthur Avenue.

Wimmer said she loves running into people she knew at Fordham, even if they were just acquaintances at the time.

“When you see them, it’s so exciting to relive those memories. It’s like you all have something to come back to,” said Wimmer, who majored in psychology at Fordham and now works in public health outreach at Hospital for Special Surgery in Manhattan.

“When we were graduating and Father McShane said, ‘This is your home, stay long and visit often’—you just connect with that, because when you walk on campus, it feels like home, like a breath of fresh air.”