skip to main content
Return to Fordham University
You are at:Home»University News»Andrew Solomon on Medical Problems and Social Solutions

At a Lincoln Center campus conference titled “Treat the Patient, Heal the Person,” keynote speaker Andrew Solomon, PhD, author and professor of psychology at Columbia University, made the distinction between a medical problem and a social problem by citing examples from his own research.

Solomon described one of his research subjects, Clinton, who was diagnosed at birth with diastrophic dwarfism, a condition that led to more than 30 operations during his lifetime. Such operations can address the medical aspect of the dwarfism, he said. But Clinton’s inability to reach items off a store shelf is an example of a social problem, particularly if the store doesn’t provide staff to assist persons with disabilities. 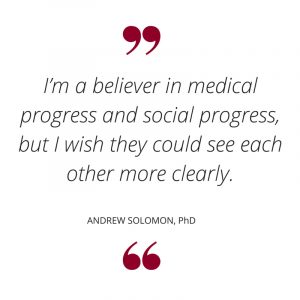 When Clinton was born, doctors told his parents to leave him to die at the hospital, said Solomon. His mother didn’t see him for three days, at which time she decided to take him home and find a good specialist. Most doctors foretold only medical problems, but eventually she found one of the best specialists in the country. Solomon said that the doctor lifted the boy up and announced “He will make a handsome young man one day.”

“This [story]is an example of how much language or belief can alter medical reality,” said Solomon, author of Far from the Tree: Parents, Children, and the Search for Identity (Scribner, 2012).

The conference, sponsored by Fordham’s Global Healthcare Innovation Management Center and the Center on Religion and Culture, focused on spiritual and cultural diversity in healthcare. Solomon said that identity has played a large role in a person’s health in many of the cases he has studied.

A disabled person’s identity, he said, is defined in terms of “horizontal and vertical” influences. The vertical identity is one formed in the home and related to language, religion, ethnicity, and class. A horizontal identity is one discovered outside the home, where the identity is learned from a peer group.

For example, Solomon spoke of befriending a deaf person who introduced him to deaf culture. He went to deaf theater performances and deaf gatherings. He discovered a “beautiful society” of hearing-impaired people—something that a deaf child would likely not discover until he or she left the family and went out into the “real world.”

The horizontal culture of disabled people is very similar to the gay experience, said Solomon. There, too, the horizontal identity is often discovered in adolescence.

Solomon said he was a believer in medical progress and social progress, but that “I wish they could see each other more clearly.”

He reminded the audience that it was not long ago that homosexuality was diagnosed as a medical disorder: he read from a 1966 Time magazine article that described homosexuality as a “pernicious sickness.”

Regarding Down syndrome, he said, the Atlantic Monthly published a 1968 article that stated, “There is no reason to feel guilty about putting a Down syndrome child away, whether it is put away in a traditional sense of hidden in a sanitarium, or in a more responsible lethal sense.”

Today our understanding of diversity has so shifted that there are even Hollywood stars with Down syndrome, he said.

Yet even today, parents of children with Down syndrome could choose to have cosmetic surgery for their child that would reduce the size of the tongue and lift drooping eyes so that they’d appear “normal,” he said.

“That is a medical solution to a social problem, and it’s very deeply troubling,” he said. “It’s a kind of a tyranny of mainstream values.”

He then cited several medical breakthroughs that may also eliminate some of the identity cultures he celebrates in his book. A cochlear implant could be placed in a child’s ear so that he or she could grow up and function in the speaking world; and a substance, BMN 111, could soon block the gene that causes dwarfism.

“There is the question of what should be treated, what should be cured, and what should be left alone,” said Solomon. While Clinton needed surgeries to be able to walk, does a child with Down syndrome need plastic surgery?

“There are people who have been subjected to treatment who didn’t want to ‘get better’ or change in the way that was put forward,” he said. “What they wanted was to go on to live their lives as themselves.”