skip to main content
Return to Fordham University
You are at:Home»Inside Fordham»An Ancient Church in the New World 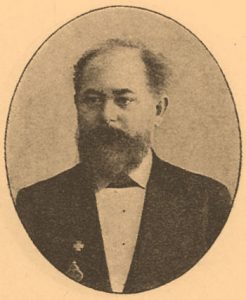 The eyes in question belonged to Alexander Pavlovich Lopukhin, a graduate of St. Petersburg Theological Academy, a future professor of ancient history, biblical scholar, publicist, translator, and writer of a travelogue that was meant to introduce America to Russian readers back home.

In 1879, Lopukhin came to New York City from St. Petersburg as a 27-year-old cantor for a small yet diverse Orthodox parish community, years before the arrival of large numbers of Slavic and Greek immigrants. His three-year stay resulted in the travelogue, numerous essays in Russian on America’s religious life, and a dissertation on Roman Catholicism in the United States.

Shevzov, a professor of religion at Smith College and director of Smith’s Program in Russian, East European and Eurasian Studies, said she approached Lopukhin’s texts not necessarily to understand how Russians perceived the United States, but as a way to further understand Orthodox thinking regarding “the West” during the time period.

She jokingly referred to the young man’s trip as a “gap-year experience,” taken as much “for the adventure as for the mission.” As a traveler, he was in good company, she said. The era was considered a Golden Age for European travel in America, and attracted the likes of playwright Oscar Wilde and stage actress Sarah Bernhardt.

Once in the U.S., Lopukhin wrote of the hectic pace of daily life, the impact of immigration, and the spectacular growth of the Catholic Church, a phenomenon he believed might offer Orthodox Christians some helpful insights regarding the future of Orthodox Christianity in this country.

Lopukhin occasionally wrote for Oriental Church Magazine, a magazine on religion, literature, and art A project initiated and edited by parish priest in the Orthodox community at the time, Lopukhin saw the magazine as an opportunity to break down stereotypes of Orthodoxy and Russians

But his travelogue mainly addressed his secular audience at home that assumed that in America, as a modern, progressive nation, religion was relegated to “dark corners of society.”

But Lopukhin found that such a viewpoint lacked nuance, said Shevzov. In the United States, he found religion to be a “ubiquitous presence” in the city.

She shared a story of when Lopukhin first arrived and stayed at a hotel. He found a bible in his room and sought out the management to return it to its rightful owner, at which time he was informed that the American Bible Society placed them in all the hotel rooms. He also noted that Sunday sermons were announced in the newspapers, providing a sense of competition among preachers, and was perhaps most captivated by the culture of preaching he encountered.

But it was the phenomenal growth of the Catholic Church that struck him most. From his small chapel window at the 951 Second Avenue (now an Irish pub), Lopukhin could see St. Patrick’s Cathedral. He was well aware that the city had no Catholic churches a mere century before, so he found this “exotic plant” to be one of the “most striking historical phenomena in modern times”—a phenomenon that testified to the historically transformative influence of immigration in shaping America and the American character.

The 2016 Orthodoxy in America Lecture was supported in part by The Nicholas J. & Anna K. Bouras Foundation, Inc.