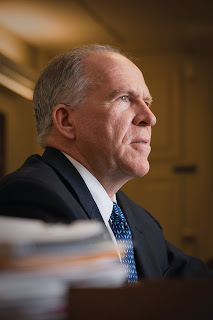 As President Obama’s deputy national security adviser for counterterrorism and homeland security, Brennan was part of the government-wide intelligence team that helped track down the leader of Al Qaeda and the man responsible for the attacks of September 11, 2001.

The following morning, as news of bin Laden’s death continued to spread around the world, Brennan appeared on several television programs. He later answered questions at the White House’s news briefing about the raid, its planning and the U.S. government’s years-long search for bin Laden, as well as the administration’s decision to kill, rather than capture, the world’s most wanted terrorist.

“If we had the opportunity to take bin Laden alive,” he said, “if he didn’t present any threat, the individuals involved were able and prepared to do that.”

Before joining the Obama administration, Brennan served in the Central Intelligence Agency for 25 years, including four as Middle East station chief in Saudi Arabia. In 2004, he was named director of the federal government’s National Counterterrorism Center, established that year to coordinate intelligence from the myriad agencies collecting data around the world. Later, he served as an adviser to Obama’s presidential campaign.

As a student at Rose Hill, Brennan traveled to Indonesia in between his freshman and sophomore years to work at the U.S. Embassy there and to research the politics of oil. During his junior year, at the suggestion of John Entelis, Ph.D., professor of political science at Fordham and director of the University’s Middle East Studies program, Brennan studied abroad his junior year at the American University in Cairo, Egypt.

Last fall, FORDHAM magazine published a profile of Brennan. “Terrorism,” he said, “unfortunately, is found in the Middle East, so it’s been a driving force in my career and in my life.”