skip to main content
Return to Fordham University
You are at:Home»University News»Alumni Welcome President Tetlow to Her First International Reception
President Tetlow with students, faculty, and staff. Feature photo by Ainsley Woakes; slideshow and embedded photos by Taylor Ha
At her first international alumni reception, Fordham President Tania Tetlow celebrated her many connections to the United Kingdom and learned from students about why their time in London has been so special.

“I have such deep roots here, and I’m thrilled that we have a London campus,” said Tetlow, who has familial and professional connections in the U.K. “I’m so excited to dream even bigger about what we can do.” 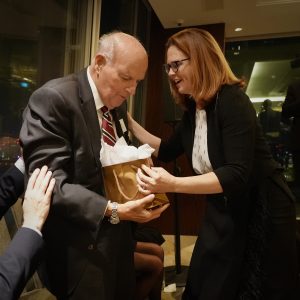 The Oct. 26 event was part of a series of presidential welcome receptions scheduled for this academic year. Over the past few months, Tetlow has connected with members of the Fordham family in New Jersey and Washington, D.C. She is planning on visiting at least 10 more cities, including New Orleans, Los Angeles, and Miami.

The reception was held at the Shard, the tallest building in Western Europe. It was attended by about 120 guests who traveled from the United Kingdom and other countries to attend. In total, about 10,000 Fordham alumni live abroad.

From the Shard’s 34th-floor Sky Lounge, guests wined and dined while taking in panoramic views of the River Thames and iconic London landmarks such as Tower Bridge and St. Paul’s Cathedral.

The reception began with a moment of silence for the late Scott Simpson, LAW ’82, a member of the Fordham London Advisory Board and the father of two Fordham graduates, who died last spring. Ginger F. Zaimis, a current board member, recited her translated excerpt from Meditations, a famous text by Roman emperor and philosopher Marcus Aurelius. Later, Tetlow presented a token of appreciation to the evening’s host, William Loschert, GABELLI ’61, a trustee fellow who played a significant role in bringing Fordham London to life. (In 2021, he was also knighted by the Vatican.) 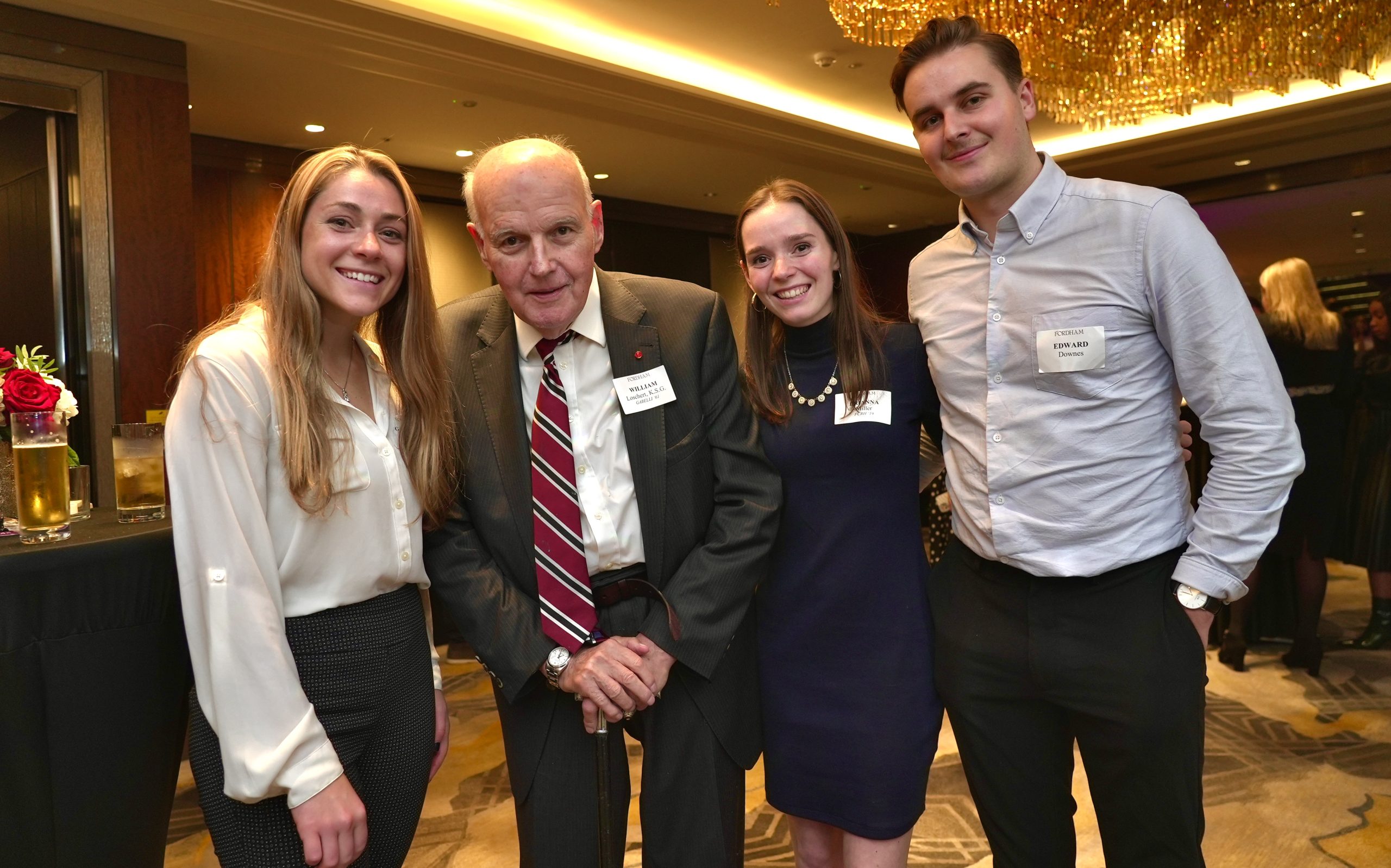 Life Abroad in the ‘Greatest City in the World’

Before Tetlow formally addressed the guests, three current students offered her a warm welcome and reflected on their time at Fordham London. 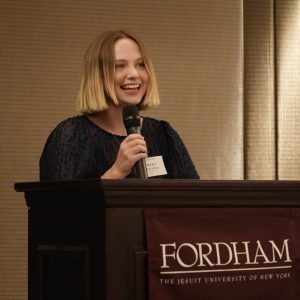 Kyla McCallum, a senior at Fordham College at Lincoln Center, introduced herself as a transfer student from the University of Michigan. She said that when she decided to enroll at Fordham, she heard stories from students at other universities who had experienced tough transfers. For her, it was the opposite. Upon her acceptance, she learned that she would need to complete the rest of her education on Fordham’s campus—and luckily, the University has one in the heart of  London.

“In addition to receiving a Jesuit liberal arts education, I also get a global experience—something I barely dared to hope for after transferring amid the COVID pandemic,” said McCallum, who studies new media and digital design.

At Fordham London, she is learning about the business of fashion, Christianity, and Shakespeare. The latter course offers trips such as an outing to Shakespeare’s Globe, where McCallum and her classmates saw The Tempest and another Shakespeare play that features a 21st-century twist.

“What I didn’t anticipate from my Shakespeare class was for our professor to take us to a queer retelling of A Midsummer’s Night Dream,” she said. “Fordham professors are remarkably dedicated to inclusion of diverse identities in their curriculum.”

In London, she said, she has found a new culture and a future abroad. In fact, she’s planning to apply to master’s programs at schools in the United Kingdom after she graduates.

A Gabelli Education in London: One of the ‘Financial Capitals of the World’

Matthew O’Sullivan, a junior at the Gabelli School of Business, has lived in London for only about two months, but said the city now feels like home. He’s even gotten used to vehicles driving on the left side of the road.

“I’ve gotten very comfortable with being here, even down to simply crossing the street—looking right, and then left,” said O’Sullivan, a business administration student from Garden City, New York.

O’Sullivan said that being able to study in both New York and London is especially helpful for him, since the two cities are among the world’s financial capitals. Sometimes, though, the best education comes from experiencing life in London—from trying beans on toast to successfully traversing the city in the Tube, he said.

“During my time here, I’ve witnessed two monarchs, almost three prime ministers, so who knows—I could be prime minister by the end of the semester,” O’Sullivan joked. “But studying abroad here in London has … certainly has opened up a new chapter in my life, just as we’re opening a new chapter in the history of Fordham by welcoming President Tetlow to our amazing community.”

The final student speaker, Bradley Moyer, a senior at Fordham College at Rose Hill, delivered a poignant speech about the role that the University has played in his life. Moyer said that he started college during a difficult time in his personal life, and the pandemic worsened his situation. The Fordham community offered him the support that he needed, he said.

“Fordham offered me support with excellent professors and new people that I could rely on,” said Moyer, a New Jersey native who is majoring in communication and culture. “The staff at Fordham … helped me in the summer to get through missed work and had faith in me when I felt like I had none.”

Moyer—who participated in Fordham’s second drag show—said Fordham’s New York and London programs both offer “judgment-free zones that allow everyone to be who they are.” 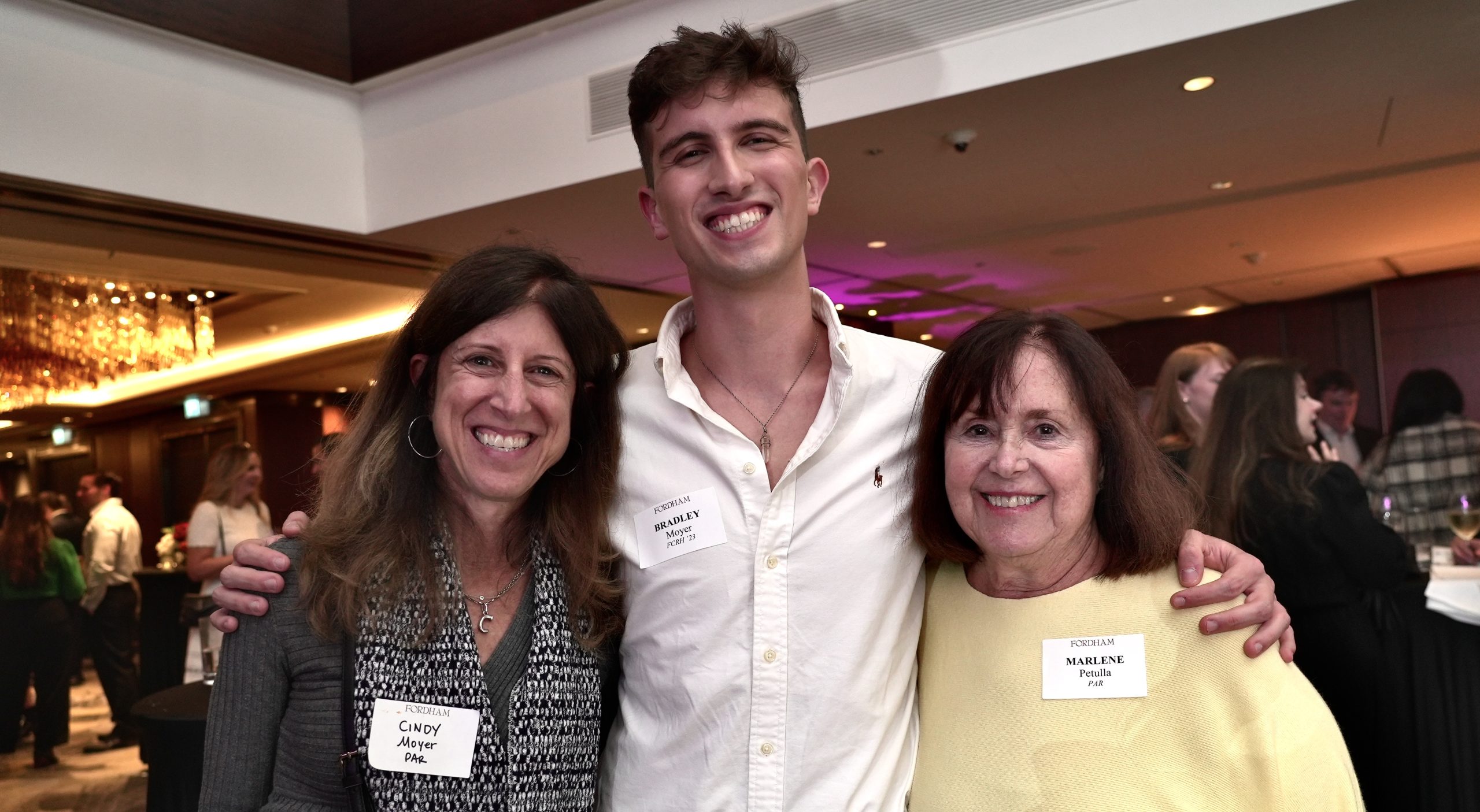 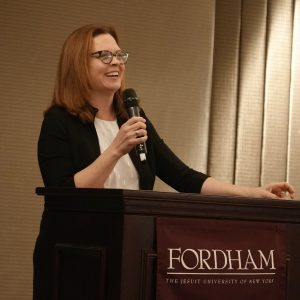 Tetlow concluded the evening with some reflections on her own connections to the United Kingdom.

In her late 20s, she joined the British-American Project, an organization that promotes cross-cultural understanding among young leaders. Through the group, she made many friends in London and met her future husband, Gordon Stewart, who was living in Glasgow at the time. Today, she has a daughter, Lucy, who has American/British dual citizenship; a stepson, Noah, who lives in Scotland; and a home in Fife, Scotland, with their family.

“I am proudly bilingual. I drink a cuppa. I take out the rubbish. I feel chuffed from all this praise,” she said, to laughter. “And I can, if I’ve had a couple of pints, even understand Geordie. That’s how local I feel.”

Tetlow asked the guests to help her to build on the strengths that already exist at Fordham’s London campus by sharing potential student internships, guest speakers, and resources with Vanessa Beever, senior director of Fordham London.

“Thank you for demonstrating what Fordham means, what our students become, to the parents who’ve entrusted us with your children, to the friends who’ve helped us in so many ways,” Tetlow said. “We love you all—and I’m so glad to be among you.”