skip to main content
Return to Fordham University
You are at:Home»Inside Fordham»Alumni Spotlight: Recent Alumnus Quick to Give Back

It didn’t take long for Sihien Goh to show his gratitude for his Fordham education.

“I’m really excited for the beginning of my career,” Goh wrote in a letter accompanying his gift. He wrote that his gift was a “small gesture to the school for the most wonderful four years of my life and for the life-long education that I received from the Jesuits.” 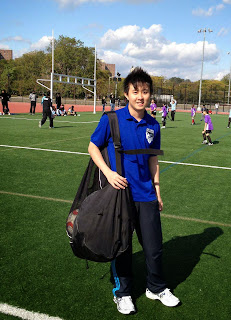 Goh came to Fordham at the age of 20 after completing two years of mandatory military service in his native Singapore.

Some 60 years earlier, his grandparents had immigrated to Singapore from southern China in search of a better life. They worked as laborers on the docks during the British colonial era, dying young.

Goh’s father, orphaned at a young age, worked as a child in rubber plantations and started his own business growing tropical fish when he was 17.

Their hard work to build a better life for their children paid off. Goh’s two older brothers attended university in England. By 2008, when it was time for Goh to choose where to study, the U.S. banking collapse was making global headlines. He closely followed newspaper reports detailing the crisis, and developed an interest in finance and a desire to study in New York City.

His desire for an immersive American experience led him to Fordham, where he found the feeling of a local community and the opportunity to travel with friends around the United States.

“I went to my friend’s wedding in Cleveland, spent Thanksgiving with a friend in Allentown [Pa.],” says Goh. “I had a good time.”

While majoring in finance at the Gabelli School of Business, Goh interned at UBS Financial Services in Manhattan and at the Singapore offices of Credit Suisse and Lazard during the summers. He also co-founded, with Anthony Walters, FCRH ’13, Fordham’s Alternative Investments Club.

Goh, who specialized in value investing, greatly admires two of its most prominent and successful proponents, Warren Buffett and Mario Gabelli, GSB ’65, the school’s namesake.

Goh is grateful to Joseph M. McShane, S.J., president of Fordham, for introducing him to Mario Gabelli, and for his leadership for the University and his commitment to liberal arts education.

“I will never forget our liberal arts core curriculum, in particular the philosophy and theology classes, that opened my eyes to new perspectives in life. It got me thinking about other things besides numbers and finances, to think about my life, relationships, friends, and family.”

At home in Singapore, his parents often recited a common Chinese proverb: “to always remember the source of the water that you are drinking from.”

Goh says he will always remember “anyone who helped me get to where I am.”