Thousands of Fordham graduates live outside the United States, but distance doesn’t keep them from staying connected to their alma mater. As Fordham continues to become a more global institution, alumni networks—both formal and informal—are quickly forming around the world.

Holly Donahue, FCRH ’03, senior manager of brand communications for The Economist, is leading the Fordham Alumni Chapter of the United Kingdom, based in London. “It’s an international city, like New York. People come and go, but we have a core group of alumni who come to the events regularly,” she says. “And we are growing it.” 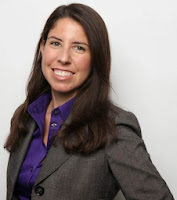 Holly Donahue, FCRH ’03, is president of the London alumni chapter.

The chapter hosts an annual reception with Joseph M. McShane, S.J., president of Fordham; networking events; trivia pub nights; and bowling parties. And this past July alumni and family came together at the Fordham London Centre to celebrate the U.S. Independence Day with a barbecue and, in keeping with their British surroundings, some croquet matches.

Housed on the campus of Heythrop College, theFordham London Centre is home to a variety of Fordham’s study abroad programs, including programs in liberal arts, business, and British classical theater.

“Having students here makes [the chapter]well-rounded,” Donahue says. Alumni, already familiar with the city, offer students some guidance—from navigating the Tube to charting a career path. “Students really like talking with the alumni. They have been reaching out to me to find out more about my job and what it’s like to work abroad.”

Donahue, who has lived in London for nearly three years, first stepped foot on English soil when she studied at the London School of Economics as a Fordham undergraduate. The political science major (and economics minor) found the school to be a good fit for her. “I wanted to be at a challenging university [for my junior year abroad]. It was a great experience. And I loved the international feel of the city, all the different nationalities,” she says.

“I’ve always been obsessed with British culture. I fell in love with the city and wanted to come back.”

She found the opportunity to do so when she landed a position with the Economist Group, the company that owns one of her favorite publications, The Economist. “It’s a British newspaper, so the chances of me getting to London were greater,” she says.

Donahue started in the company’s New York office, doing business-to-business marketing in the Economist Intelligence Unit for a few years before moving to the group’s headquarters in London, where she helps to manage advertising, PR, and branding for The Economist.

After her study abroad experience, the Smithfield, R.I., native participated in one of Fordham’s Global Outreach service trips. Just after graduating, Donahue spent a month in and around Bucharest, Romania, working in orphanages that housed physically and mentally challenged children.

“The kids really enjoyed our company; we helped keep their spirits up,” she says. “It’s a very poor country that has a long way to go for finding homes for their children. We were put in some challenging situations, but it was a phenomenal experience.”

For Donahue, who went to a Christian Brothers high school, an interest in service and social justice is deep-rooted—and part of her decision to attend Fordham.

“I always felt there was a sense of community involvement in a Catholic school. That Jesuit tradition appealed to me too,” she says. “And I wanted to go to a school that had great access to a city for internships and entertainment. I wanted the best of both worlds, and Fordham had that.”

Through the alumni chapter in London, Donahue is keeping that sense of community. With nearly 300 alumni living in the United Kingdom and students coming and going each semester through the London Centre, she’s rarely far from a Fordham presence.

Donahue says she’s grateful to “be a part of Fordham” even when she’s not in New York City. “I’m glad to spread the news about Fordham any way I can and say what a great university it is.”