skip to main content
Return to Fordham University
You are at:Home»University News»Alumni of Color Meet and Greet in Harlem

Kassandra Reyes-Vizcaino, FCRH ’00, and Omar Cruz, PCS ’00, hadn’t seen each other in 16 years, but they recognized each other immediately on Oct. 10. They were two of among more than 60 who turned out for the first Fordham Alumni of Color event to be held in several years.

Co-sponsored by the Office of Alumni Relations and the Office of Multicultural Affairs, the evening was an initial effort to help build a strong, cohesive chapter of minority alumni who are interested in connecting with each other regularly and getting involved with campus life. 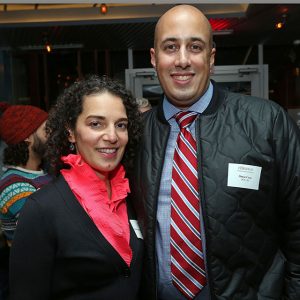 For Reyes-Vizcaino and Cruz, the event served as something of a reunion. But despite shared memories, neither knew that the other had been a first generation college student.

“It’s funny because we never talked about this. Hearing Omar talk about it now made me realize we had very similar experiences,” said Reyes-Vizcaino. Back then, she said, college “was a whole different world that we completely didn’t know how to navigate.”

Cruz, who is of Dominican descent, said he enrolled at Fordham’s Rose Hill campus through HEOP and later joined CSTEP. It took him two years to adjust to the culture shock, but he eventually found his footing. He said that at the time, it would have been great to meet an alumnus who was also adjusting to the experience.

“There’s a lot more that we as an alumni group can do to give back to students,” said Cruz. “There were experiences that I struggled with how to handle, and it would’ve been great if someone were to have reached out to me and said ‘I went through that.’”

Cruz has already returned to Fordham several times to mentor CSTEP students, but he said he’d like to do more. Reyes-Vizcaino said she would, too.

“I work as a counselor in education and I would love to mentor a Fordham student, especially first-generation,” she said.

The chapter launch was held at Angel of Harlem restaurant, which is co-owned by Kathleen Adams FCRH ’10, GSAS ’12. She said looks forward to building a cohesive alumni community.

“I’m happy that the University is taking the steps necessary to address and remedy what’s been lacking in the recent past,” she said.

Felicia Gomes-Gregory, FCLC ’88, GSAS ’98 and Marion Bell, FCLC ’92, were members an earlier iteration of a Black and Latino alumni group. Like Reyes-Vizcaino and Cruz, both alumni said they hope the group will be able to work with students. Gomes-Gregory said the old club was a “go-between for Fordham administration, staff, the students, and the alumni when they needed support.”

“We tried to be there, whether through scholarships, mentoring from a career standpoint, or just everyday issues that occur on campus with other students,” said Gomes-Gregory. “Because the same issues students have today are the same issues I had when I went to school here.”

“The best thing that can happen out of this group is that we can be supportive of future alumni. We can find ways to socialize among ourselves and bridge the gap between graduating and becoming a contributing member of society.”