skip to main content
Return to Fordham University
You are at:Home»Inside Fordham»Lectures and Events»Mentors Advise Students to Challenge Preconceived Notions

With the bright lights of Times Square just beyond the windows, commuter students and students in Fordham’s CSTEP and HEOP programs visited the global headquarters of Thomson Reuters Corporation for a mentoring night with the President’s Council.

Though the March 6 event’s setting was decidedly big business, the student and alumni participants hailed from a variety of disciplines. 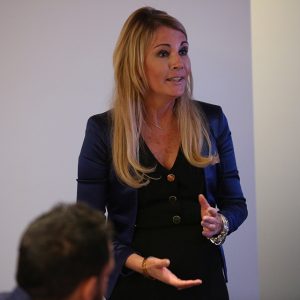 Fordham College at Rose Hill junior Sherika Christopher said she had researched the mentors before coming. The CSTEP student, who is following a premed concentration, was looking forward to meeting up with Gene Caiafa Jr., D.D.S. FCRH ’91, who has an established family dental practice in Queens.

“I’d like to talk to Dr. Caiafa about how he got to where he is,” she said.

Josephine Fernandez, a HEOP and CSTEP junior at Fordham College at Lincoln Center, is studying social work. She said that networking among a variety of professionals is as key to becoming successful as a social worker as it is to other professions.

“Whether it’s opening your own private practice or just getting a message out, networking is always important,” she said. “Advocacy is also a big part of social work [and]a lot of folks who come to events like this support a lot of charities.”

Patsy Doerr, GSE ’96, Thomson Reuters’ global head of corporate responsibility and inclusion, welcomed the students and told them to be strategic and “network with a purpose.”

“Get out there—but not in a mercenary way,” she said. “When you go to an event, make sure you get two or three business cards . . . and that’s enough. If you get 15, you’re not going to be able to follow up with all those people.” 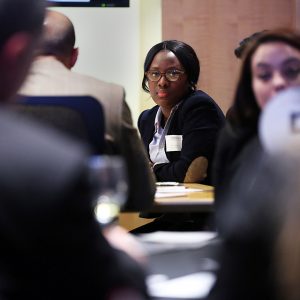 Grace Obeng takes in the advice

Doerr also advised students to be honest with themselves about what they do well and what their shortcomings are.

“Know what you’re good at and have a really quick narrative of what those two or three things are,” she said.

Lastly, Doerr told the students, especially the women in the room, to take risks.

“There’s a lot of data out there that [says]women take less risks than men,” she said. “I’m not suggesting that every woman in this room falls into that category, but make sure you take as many risks as you’re comfortable with.”

She said that she understood that many well-intentioned bosses often make assumptions about their employees. She told students that if they find they are being misjudged to respectfully set the record straight.

“I was getting a performance review and I said to my supervisor, ‘Please don’t rule me out for an international assignment just because I have two young babies,’” she said.  “He later called me and said, ‘How would you like to go to Hong Kong?’”

Several alumni agreed that preconceived notions are something that everyone in the room had to battle against at one point or another.