skip to main content
Return to Fordham University
You are at:Home»Colleges and Schools»Graduate School of Arts and Sciences»Alumna Gift to Support New Chair in African and African American Studies

When Margaret (Peg) Peil, Ph.D. GSAS ’61, died in March at age 90, she left behind a rich collection of research about Africa that she’d conducted as professor of sociology of West Africa at Birmingham University’s Department of African Studies.

Among the books that she penned before retiring in 1986 were The Ghanaian Factory Worker: Industrial Man in Africa (Cambridge University Press, 1972) and Cities and Suburbs: Urban Life in West Africa (Africana Publishing, 1981). 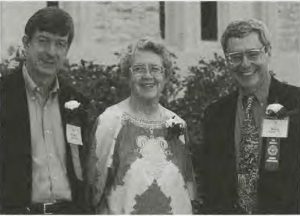 Her legacy also includes a bequest for her alma mater that will be used to establish a new distinguished chair in African and African American Studies.

The Margaret Peil Distinguished Chair will be open to scholars of any field—such as political science, history, cultural studies, literature, or sociology—who are devoted to the area of African and African American Studies, said Eva Badowska, Ph.D., dean of the faculty of arts and sciences and associate vice president for arts and sciences. Peil’s generosity will help the University strengthen its commitment to the work of anti-racism, she said.

“It’s about making visible the University’s commitment to developing leaders in social justice, of which racial justice is an extremely prominent part. It’s very urgent and timely,” she said.

The chair is unique both because of the source of its funding and what the University hopes its holder will achieve. Peil was a native of Racine, Wisconsin, who was described in her obituary as a devout Catholic who attended Mass every day. In her lifetime, she visited well over 100 countries, from Bhutan to New Zealand, and she was so enamored with Africa that she tended a lush garden shaped like the continent that she opened up to the public for 20 years.

“I expect the person who will be hired will not only produce his or her own research and create research initiatives in the University, but also play a leadership role as well,” he said.

“We are living in a transformative movement, and we need transformative actions. I think it’s a good step in the right direction,” he said, noting that he looks forward to beginning “the hard work of translating the endowed chair into reality to fulfill our mission and the mission of the University.”

Badowska echoed the sentiment. Rather than focus on the specific trajectory of intellectual academic inquiry in a narrow field, she said she hopes the recipient would aim to have a grander, institutional impact.

“This is an opportunity to build on Dr. Peil’s vision in support of the University’s mission to form future citizens while emphasizing the anti-racism and social justice commitments that are at the heart of the institution’s formation of its students,” she said.