skip to main content
Return to Fordham University
You are at:Home»University News»Addressing the Opioid Crisis from the Pews
Photo by Tom Stoelker
Nina Marie Corona ran a very successful dessert business with distribution in more than 200 stores in five states. But she was grappling questions about God and spirituality that were far more complex than life as a capable businesswoman could address.

“Everybody thought it was so wonderful, but I knew I didn’t want my life to be about rice pudding,” said the Fordham graduate student. “I felt a calling, but I wasn’t sure where the call was leading me. So I figured I should study theology.”

So Corona sold off the kitchen equipment and started taking courses toward a bachelor’s in theology. It set her on an introspective journey that was, on reflection, a path toward becoming holy.

And then her youngest daughter became addicted to heroin.

“I couldn’t think to study anymore,” she said. “But I didn’t want to drop out.”

Her daughter’s addiction changed the way Corona viewed spirituality and her role in the church. She transferred to get a bachelor’s in studio art as a part of a spiritual journey that helped her cope with her daughter’s illness. “It helped me stay in school, and graduate,” she said.

After obtaining a master’s in spirituality online from Loyola University Chicago and an education certification in alcohol and drug counseling, she enrolled in Fordham’s Graduate School of Religion and Religious Education to pursue a doctorate in ministry. She said that her daughter’s addiction shook her out of an “inwardly focused” spirituality and brought her into the congregation to help others facing down the opioid crisis.

Today, Corona is a certified recovery specialist helping communities to take action, often through reaching out to church laity. She said she doesn’t necessarily blame the institutional church for not addressing the crisis. Indeed, she noted that the Vatican held a conference on the problem of addiction in November 2016. She also hailed the recovery work of many priests and nuns on the issue.

But her focus has been on her fellow parishioners. 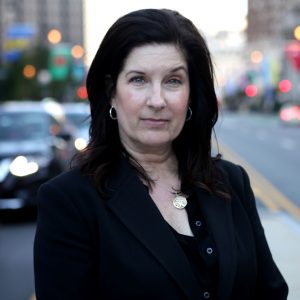 “When we’re in the midst of a deadly epidemic and people with addictions are suffering tremendously, and they can’t even turn to the person next to them in the pew because they’re ashamed, then there’s something really wrong with our Christian identity,” she said.

In part, Corona feels that the reluctance of many parishioners to feel available to those in need is due to an inherent deference to the clergy—even when they may have a lay expert in their midst. But first and foremost, she’s set out to battle the stigma of addiction.

She also said that the stigma of addiction often prevents parishes from incorporating programs that relate recovery to church spirituality. In response, she began to offer a four week series that examines addiction through a “bio-psycho-social-spiritual model.” At several Philadelphia-area parishes and retreat centers, once a week, she focuses on a specific aspect of addiction—from biology to psychology to sociology to spirituality. She said that she also developed a community action follow-up workshop this past summer at Fordham in an ecclesiology class.

“I want people to understand that we need to become afire with the spirit,” she said. “Because of my experience with my daughter, I know what people using drugs need. And it’s things that ordinary people can do: Just be there, drive someone, cook a meal, or make some phone calls.”

She hopes that the community action workshop will empower small communities of volunteers in each parish to think about what they can to do address what is a national crisis. And in the process, they can begin to reposition the role of the layperson.

While the opioid crisis has brought Corona to focus on the role of congregants, she said her ideas have theological underpinnings that go back to Vatican II. She cited the Apostalicam Actuositatem (Decree on the Apostolate of the Laity) as paving the way for lay people like herself to “act directly and in a definitive way in the temporal sphere.”

“There are some wonderful priests and sisters who have called me in to talk about the crisis and what we can do as a community, [and]I always say if I had a priest on the ticket I’d be a lot more popular,” she said.

Despite several priests and professors saying she had a knack for theology, Corona veered toward studying ministry largely because of her activist leanings.

“Theology is just a little too much talk and I’m more about action, so of course I’m drawn to ministry and the Jesuits,” she said.

At first, she was also dubious about online education. But after getting her online Loyola master’s, she said she was hooked.

“I’m very serious about education and I always thought you have to be there and interact, but if you have a school that’s putting out good material with good professors giving you good readings, then that’s what it’s all about.”

She refers to addiction as a “family disease” that affects everyone close to the addicted person—“even those not ingesting substances.” It was in such moments that she said she recognized the role of spirituality and the potential of her fellow parishioners.

“Sometimes I stand in church and I want to say ‘I need you people,’” she said. “I need you to be there, and we need this to be the community we’re supposed to be.”