“It has been, as we New Yorkers would say, ‘a hell of a year.’ And yet, we, Fordham, did not surrender,” said Joseph M. McShane, S.J., president of Fordham, raising a glass from his office at the Rose Hill campus to his computer screen during the virtual event. “Against all odds, and thanks in no small measure to your great generosity, we were once again able to lean into the moment and to move forward with a sense of purpose and with defiant hope … On behalf of everyone at Fordham, especially our students, I thank you for your ongoing support—support that enabled us to prevail and to dream of a future filled with hope.”

The event offered an immediate way to celebrate the scholars, donors, and honorees this spring, when the Founder’s Dinner would normally take place. The in-person dinner has been rescheduled for Nov. 8, with plans for the usual Founder’s fanfare at a new Manhattan venue—the Glasshouse—pending guidance from city and state authorities.

“Although we’re not together in person, we are thrilled to be together virtually to celebrate,” said Darlene Luccio Jordan, FCRH ’89, Fordham trustee and Founder’s Dinner co-chair. “We have, this evening, our Founder’s honorees, past and present, and all of you: our generous donors and our Fordham Founder’s scholars, representatives of the University’s most diverse scholarship fund.”

This past year, the University raised $2,658,795 for the Fordham Founder’s Undergraduate Scholarship Fund—the largest amount raised since the first Fordham Founder’s Dinner in 2002—and celebrated the close of Faith and Hope | The Campaign for Financial Aid. The newest fundraising campaign, which will focus on the student experience, will be launched at the rescheduled 2021 Founder’s Dinner, said Luccio, co-chair of the new campaign.

Then and Now: A Video Update from 17 Former Founder’s Scholars

The virtual reception began with the screening of a pre-recorded video featuring former Founder’s Scholars who provided updates on their careers and growing families, from as near as the South Bronx and as far away as Belgium. Among them was an aspiring family medicine physician at University of Virginia’s School of Medicine, a director of strategy at The New York Times, a communications strategist who works with the European Commission, and a Harvard Law School graduate and current director on Barclays’ litigation team in New York, where she lives with her husband, a fellow Fordham alumnus, and their two-year-old daughter.

“As you can see and hear, not only are they all over the United States and the world, but they are having incredible experiences in making impacts on our society,” said Luccio, a Founder’s 2012 honoree, directly addressing the donors on the Zoom call. “And I know all of you are just as proud as I am to be a part of this incredible group in supporting these absolutely amazing young men and women.”

An Aspiring Cosmologist, A Woman Leader in Global Business, and A Future Ambassador

Three of the current 48 Founder’s scholars shared their stories and gratitude in real time. They reflected on how their Fordham scholarships helped them pursue their career goals amid the pandemic and beyond.

Benjamin Coco, FCRH ’23, said he is able to attend Fordham for a fifth year to finish his double degree in physics and English and double minor in math and philosophy, thanks to the Founder’s Scholarship.

“I was inspired by former Founder’s Award recipient, Alex Trebek, to pursue as much knowledge as I can,” said Coco, who plans on pursuing a doctorate in astrophysics. “This universe is filled with countless mysteries, and I hope to discover many of them. I want to express my most sincere gratitude to all of you for making this happen for me.”

For Kristen Harb, a senior at the Gabelli School of Business and a California native, the pandemic posed a series of challenges. Despite the distance and three-hour time zone difference, Harb worked with her classmates to create the first club at the Lincoln Center campus focused on empowering women in finance and economics, where she helped to mentor more than 120 students.

“In May, I will receive much more than a degree in global business,” said Harb. “In the past year, I have learned so much about what I am capable of in times of hardship and how my Jesuit education has prepared me to thrive in the face of adversity—and for that, I am eternally grateful.”

The third and final student speaker, Tauland Kaca, FCLC ’21, shared a personal anecdote. When he was 8 years old, his family immigrated to the U.S. from Albania, a former communist regime that limited his parents’ career paths. Kaca said his parents sacrificed their livelihoods and family ties at home to give him and his older brother access to greater opportunities abroad. But a lack of resources began to jeopardize their hopes for their two sons.

“Since my parents endured many financial burdens to support my brother, who also went to Fordham and then to Columbia for his master’s, I decided to commute from Brooklyn to the Lincoln Center campus. Regardless, it didn’t take long for me to realize the financial strain my Fordham education was placing on my family … When I received the Fordham Founder’s scholarship last year, those worries faded away. This is especially true amid the pandemic, since my parents have been laid off for the foreseeable future. Nevertheless, my dreams have yet to be derailed,” said Kaca, who is considering becoming a judge or a foreign ambassador. “I want to thank you for your support, but most importantly, I want to thank you for your willingness to help students like myself work towards their dreams, free of financial worry.”

‘This Evening is Our Gift to You’ 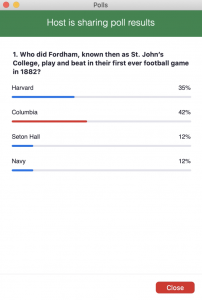 One of four trivia questions. The correct answer to this question is “Seton Hall University.”

“This evening is our gift to you. The 48 Founder’s scholars are so grateful that we are still learning, thriving, and dreaming at Fordham with your generous support,” said the evening’s emcee, Founder’s scholar Stevie Rosignol-Cortez, FCLC ’21, a political science student from Texas and an aspiring foreign correspondent.

At the end of the night, Father McShane and Bob Daleo, GABELLI ’72, chair of Fordham’s Board of Trustees and co-chair of the Founder’s Dinner, offered several toasts to the three Founder’s 2021 honorees; the previous Founder’s award recipients, many of whom joined the virtual reception; and Bill Baker, president emeritus of Thirteen-WNET and Fordham’s journalist-in-residence, who retired this year from his 12-year-long role as the Founder’s Dinner emcee.

“My friends, let me end with a final toast to the evening,” said Father McShane. “To Fordham: may she always be what she was founded to be—a daring and dangerous school where character has been formed, talent has been nurtured, and hope has been borne for 180 years.” 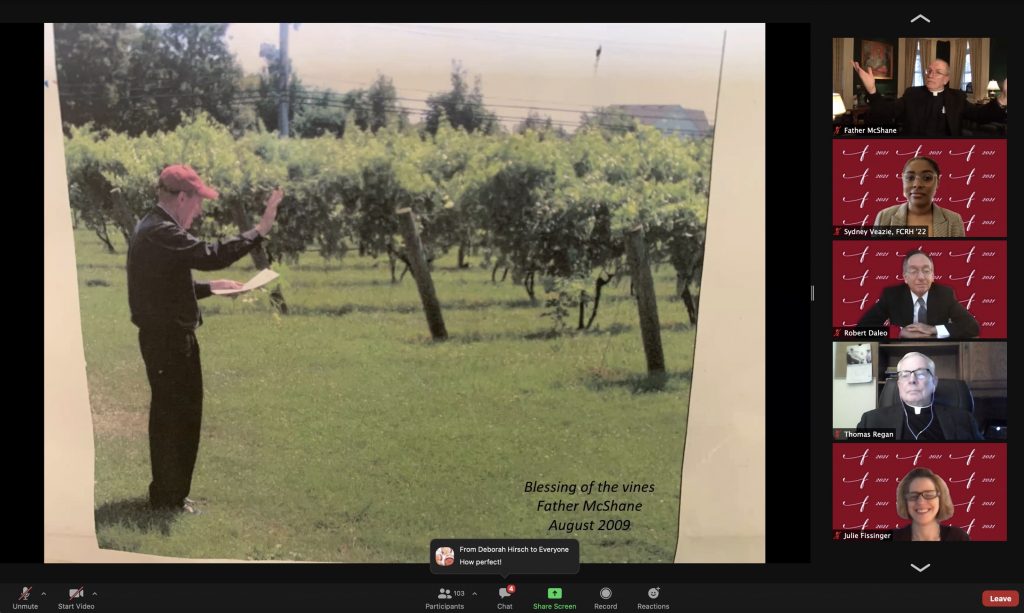 Father McShane blessing the Macari Vineyards on the North Folk of Long Island in August 2009. “After I graduated, Father McShane came out to the vineyard and offered a blessing … [In] 2009, [it]rained and rained, and it was awful for agriculture,” said Gabriella Macari, GABELLI ’09, general manager of Macari Vineyards. “After this blessing, 2010 was the best vintage we’ve seen in the past decade.”