skip to main content
Return to Fordham University
You are at:Home»Inside Fordham»A Room with a View (And a History)

This fall, three first-year roommates won the residence hall lottery. Abigail Kedik, Sarah Kimball, and Leya Maloney, all freshmen in the Class of 2018, were among the first students to move into the newly renovated Loyola Hall on Fordham’s Rose Hill campus. 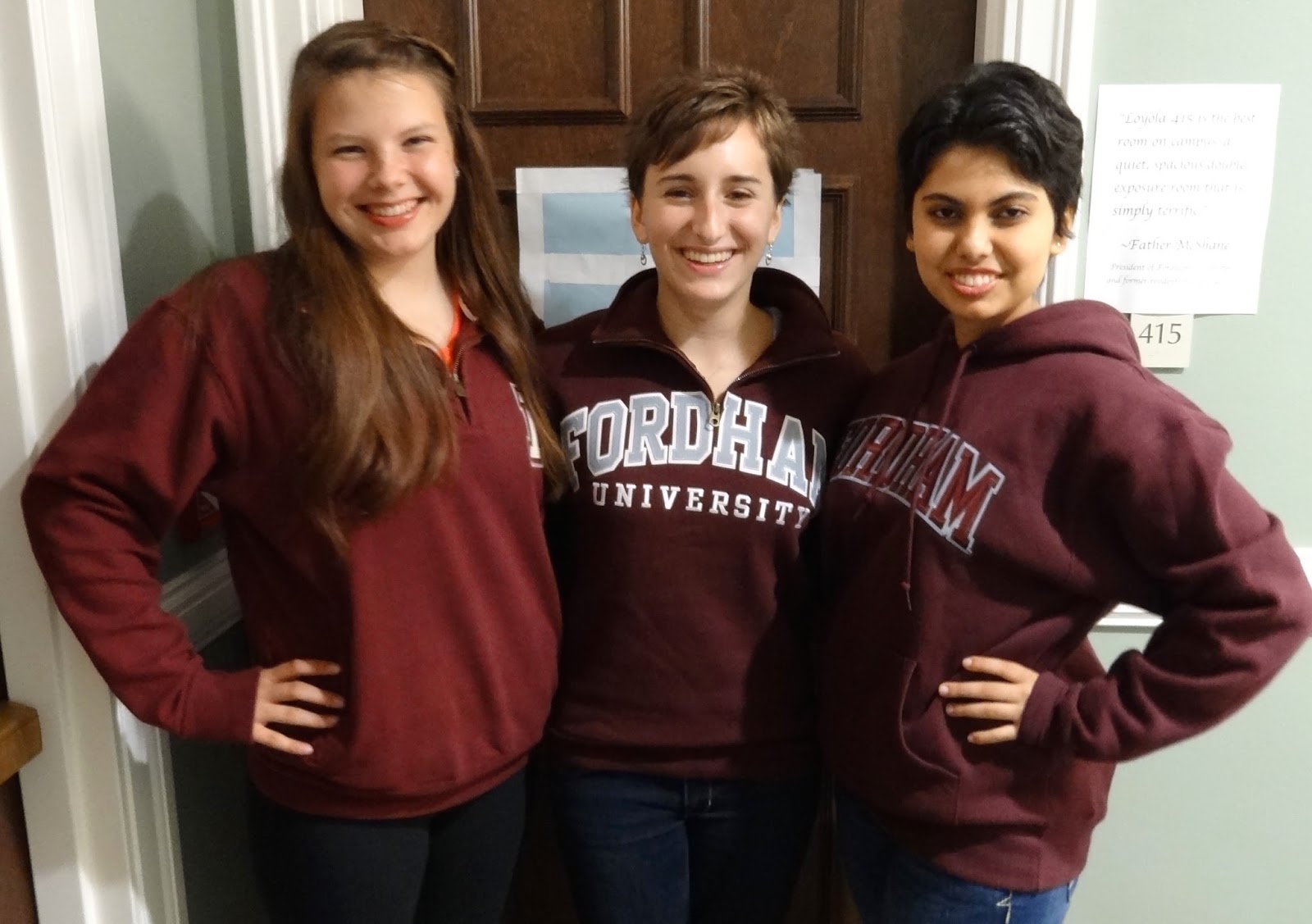 Loyola, a former Jesuit residence, was converted into a 121-bed freshman residence hall over the last two years, affording all its incoming students comfortable accommodations, but the three roommates got a little something extra: room 415, the old quarters of Fordham’s president, Joseph M. McShane, S.J. 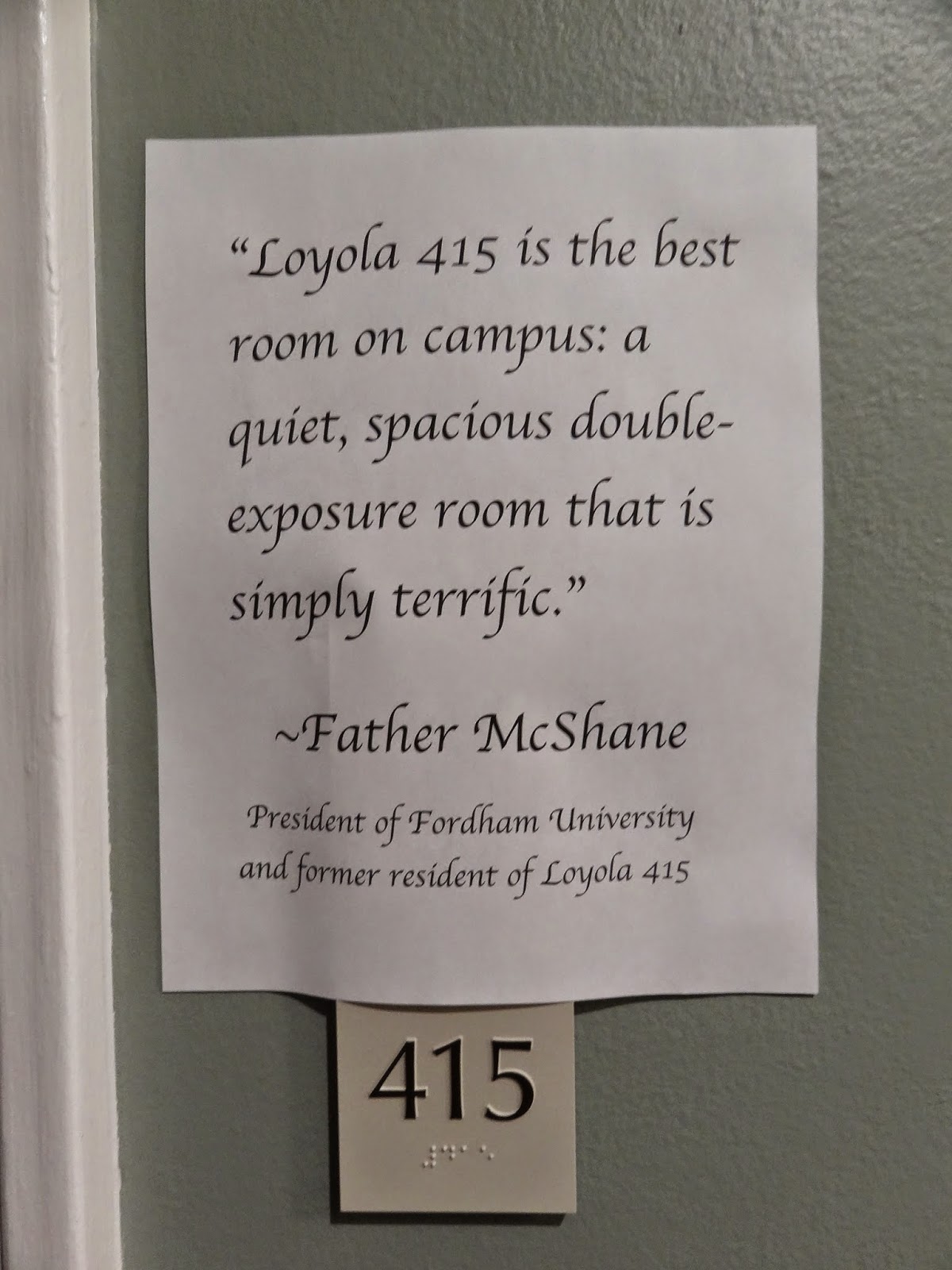 “I feel really lucky, when I first found out (on move-in day) that it was Father McShane’s old room,” Abigail Kedik said. “I was so excited, I almost took it as a sign that Despite the nerves I chose the right school.”

Kedik attended Guilderland High School in her home town of Altamont, N.Y. She plans to major in Political Science/International Studies with a minor in History or English. “I absolutely love living in Loyola. Besides the fact that the building is historic and gorgeous, the Manresa community is wonderful,” she said.

Father McShane lived in room 415 from 1992 to 1996, when he was dean of Fordham College at Rose Hill (he lived in Spellman Hall for the last two years of his tenure as dean, after the Jesuit community active in the University moved to Spellman). Father McShane extolled the room’s virtues when he met its new occupants at Move In this fall. 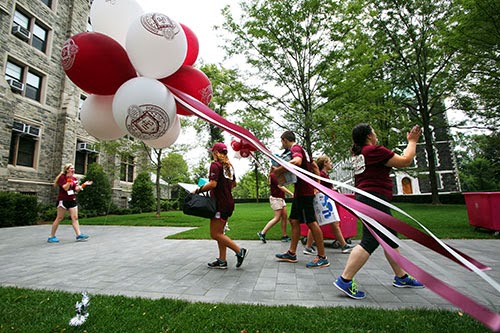 “The commute could not be beat!  I just had to run down the stairs right outside my room and could be in my office in about five minutes,” Father McShane said. “One oddity of the room: I was awakened every morning at around 5 when the steam heat started up and the pipes banged to beat the band.”

“When I first saw how gorgeous Loyola is and the spacious room I would be living in, I was so grateful,” Leyla Maloney said. “I realized how lucky I was just to be in a newly renovated building, living with a close knit community, with Father Phil and the other RA’s and RD Alex, and most of all being a Manresa Scholar.”

Maloney is a cello player from Westchester, N.Y., and attended Somers High School in Lincolndale. She said Fordham exceeded her expectations. “My roommates are my two closest friends, my entire residence hall is a close-knit community, and my Professors are really devoted to their profession and their students.”

Sarah Kimball is from Simsbury, Conn., and attended Simsbury High School. She said she has already seen I’ve already seen eight plays and musicals since coming to New York, and has been to many different parts of the city so far.

“I am so thankful to everyone who has helped me get here,” Kimball said. “Being in room 415 is particularly special to us because it was Father McShane’s room… Living in Loyola Hall is absolutely wonderful and I will be so sad when I have to move out at the end of the year!”

Jesuits called Loyola Hall home from 1928 to 2012, when the University purchased the building from the Society of Jesus, as it was making a transition to smaller Jesuit communities. In addition to students, the refurbished Loyola houses the residential life office, social and study lounges, a chapel, two Integrated Learning Community classrooms, and a community laundry facility.

“Father McShane said that Fordham is doing its job wrong if we are the same people at graduation day that we were on the first day of school,” Kimball said. “Thanks to Fordham, I have already noticed myself changing into the person I want to become.”